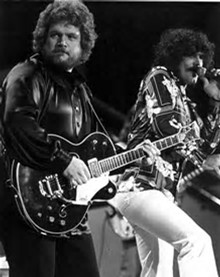 #1086: Is The Night Too Cold For Dancing by Randy Bachman

Peak Month: July 1978
9 weeks on CFUN chart
Peak Position #15
Peak Position on Billboard Hot 100 ~ did not chart
YouTube.com: “Is The Night Too Cold For Dancing’?”

Randolph Charles Bachman was born in 1943 in Winnipeg, Manitoba. When he was just three years old he entered the King of the Saddle singing contest on CKY radio, Manitoba’s first radio station that began in 1923. Bachman won the contest. When he turned five years he began to study the violin through the Royal Toronto Conservatory. Though he couldn’t read music, he was able to play anything once he heard it. He dropped out of high school and subsequently a business administration program in college. He co-founded a Winnipeg band called The Silvertones with Chad Allan in 1960. In 1962 the band became Chad Allan and the Expressions, and was renamed The Guess Who in 1965 with their first big hit, “Shakin’ All Over“.

Burton Cummings replaced Chad Allan and the band went on to score major international hits like “These Eyes”. While “American Woman” was #1 in May 1970, Randy Bachman left The Guess Who. He released a solo album called Axe, and formed a band called Brave Belt. This included his brothers Robbie and Tim and Chad Allan. Fred Turner then replaced Chad Allan. By 1973 they were billed as the Bachman-Turner Overdrive. In the mid-70s the BTO would have a half a dozen Top Ten hits in Canada and a #1 internationally with “You Ain’t Seen Nothing Yet”.

In 1977 Bachman went solo and released an album called Survivor in 1978. From the album came the single release “Is The Night Too Cold For Dancin’?” I’ve been drifting over moonbeams,
and get by on daydreams.
Got to pull myself together,
come back to the world.

When I’ve found out what I’m after,
all my tears will turn to laughter.
Then I’ll choose to let loose
and smile at myself.

The best things in life are all free.
These things to me come easy.
Live out the blues, or pay what’s due,
for goods I’ve received.

Of all the memories that we’ve made,
I’ll end up thinking of you again.
Things we’ve done, the tears, the fun,
It’ll always be real.

“Is The Night Too Cold For Dancin’?” is a song about someone who has been drifting and hasn’t found what they’re looking for, as Bachman sings “When I’ve found out what I’m after…” Yet, he is spending moments with “that sweet lady of mine.” Given the memories he has of her make him want to think of her again, it seems that a solid loving relationship is on target for what he seeks to complete his life. As the best things in life are free and come to him easy, it seems the character in the song is finding their way. After all, some people in our consumer society find it hard to appreciate or even notice a sunrise, a sunset, birdsong, or ever go for a walk in the park. So it is no small thing to arrive at a stage in life where you can appreciate simple things.

Historian James Truslow Adams writes “perhaps it would be a good idea some day…to muffle every telephone, quiet every motor, and stop all activity – just to give people a chance to ponder and reflect on what life is all about, why they are living, and what they really want.” This idea has been put into practice on the Island of Bali, in Indonesia. For over 1939 years the Balinese have begun their New Year in silence. New Year’s in Bali is called Nyepi Day, the Balinese day of Silence, which falls on the day following the dark moon of the spring equinox, and opens a new year of the Saka Hindu era which began in 78 A.D. The Balinese day of silence is dedicated to meditation, to refocus and liberate one’s mind from negative emotions. This silence is also aimed at convincing demons that the island is deserted, so that they will not come back to disturb its inhabitants. During that day, it is strictly forbidden for anyone (Balinese and tourists) to go out on the streets, to set a fire, to turn the lights on, to work or even to entertain themselves for 24 hours starting from 6am. Even the airport is closed for the day. All ATM’s are shut down. The military observe a day of silence and meditation. On New Year’s Eve the island of Bali hold parades of the ogoh-ogoh’s, 25 foot statues constructed by children, to convince the demon’s the island to depart and let the Balinese have a fresh start after their Day of Silence.

Randy Bachman’s appeal in 1978 to the best things in life being free was part of a larger, ongoing, movement toward leading the simple life in reaction to the “rat race” of modern living. Janet Luhrs authored the Simple Living Guide in 1997 which has become the “Bible” for the movement. Lurhs writes “much of what is missing in a hurried life is the simple act of nurturing. We’re too busy to nurture ourselves and definitely too busy to nurture those around us. Often we get so caught up in our own drive to succeed and accomplish that we neglect our human relationships – and it is these relationships that can give us the most depth and meaning.” Taking time to nurture a relationship, like in Bachman’s song, by spontaneously inviting your sweetheart to dance under the moonlight is a simple thing to do. It’s free, and it can help to light a fire deep inside.

“Is The Night Too Cold For Dancin’?” was an opportunity for Randy Bachman and Burton Cummings to bury the hatchet and let bygones be bygones after Bachman’s departure from The Guess Who. Local music critic, Richard Skelly, writes that Burton Cummings plays piano on this single. Cummings also harmonizes on the song. After his solo release, Bachman went on to form the band Ironhorse in 1979. They released a single called “Sweet Lui-Louise” which made the Top 40 in the USA and Top 30 in Canada. Bachman subsequently went on reunion tours with The Guess Who in the 1980s and played with them at the Pan-Am Games in Winnipeg in 1999 and, more recently, in 2003. Bachman also toured almost continuously with BTO from 1983 to 1991. He’s also released over a half a dozen solo albums between 1992 and 2015.

In 2002, as a member of The Guess Who, Bachman was one of the former bandmates who received The Governor General’s Performing Arts Award, a Canadian award noting excellence in the performing arts. Bachman has also received the distinction of being made an Officer of the Order of Canada in 2008.

Since 2005 Randy Bachman has hosted a pop music retrospective show on the CBC called Vinyl Tap. Songs like BTO’s “Taking Care of Business” have been referenced in the TV show The Simpsons.