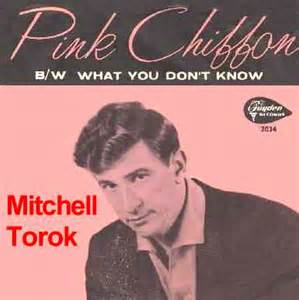 In 1929 Mitchell Torok was born in Houston, Texas. His parents were immigrants from Hungary. Torok learned the guitar at the end of elementary school. A natural athlete, Mitch went to university in Nacogdoches, Texas, on a football and baseball scholarship. While at university he was hired to write a song to mark the one hundredth anniversary of the founding of the Cononco Oil Company. He also cut his first record in the late 40s while hosting a radio show in Lufkin, two hours northeast of Houston, and another radio show in the Houston suburb of Rosenberg.

When Hank Williams died on New Years’ Day in 1953, Torok was one of many in the country music who put pen to paper. But instead of writing sad country songs, Mitch wrote a carefree tune called “Mexican Joe.” He intended the song for Hank Snow. However, Torok met up with a   record producer with Abbott Records who wanted to record the song with a novice musician called Jim Reeves. As a radio announcer on the Hayride Show in Shreveport, Louisiana, Reeves  was not in the line-up to sing. However, radio KWKH  gave Reeves a chance to perform a song and he chose “Mexican Joe”. The song went to #1 on the Billboard Country Music Charts for seven weeks in the spring of ’53. Abbott Records promptly gave Mitchell Torok a contract. Soon after Mitchell Torok had his own #1 song on the Billboard country and jukebox charts called “Caribbean”.

In 1954 the Louisiana Hayride in Shreveport added Torok to it’s roster. That same year he had another Top Ten country hit in the USA called “Hootchy Kootchy Henry (From Hawaii).” The song was about a guy named Henry who played the ukulele on the beach, drank coconuts underneath a coconut tree and danced in the sand. In 1956 Torok got a record deal with Decca Records. He and his co-writer and spouse, Gail Redd, wrote numbers of songs. But that year it was a song she wrote called “When Mexico Gave Up The Rhumba” that peaked t #6 in the United Kingdom. With this fame Mitchell Torok went on a four-month tour of the UK with Johnnie Ray. In the April of ’57 Torok had his first Top Ten hit in Vancouver called “Pledge of Love” that went to #3 here and #26 in the USA. Then in 1959 his first #1 country hit in the USA, “Caribbean,” went to #1 in Vancouver and #27 in on the Billboard Hot 100. To support his single, Torok appeared on Dick Clark Saturday Night Beechnut Show on August 22, 1959. In 1960 Mitchell Torok had his last hit on the pop charts with “Pink Chiffon”. The song is sung from the perspective of a budding suitor who had intended to take his girlfriend in her pink chiffon evening gown to their graduation dance. He’d even bought an engagement ring to present to her. However, he is late. In fact, very late. So late that his girlfriend gives up on him and arranges to get another date to take her to the graduation dance. Though he’s seen her gown ahead of the prom, the suitor now sits at home alone having missed the boat, dropped the ball. He concedes, “”but I guess I was too late, you got another date.” To which she might have replied “what was your first clue?”

Reading between the lines, it would appear this is not the first time he’s has been late for an appointed date. So was the girlfriend he was about to give an engagement ring to the kind of person who would wait for awhile and finally realize, after half an hour or so, that he was not going to show in time to take her to the prom? And at that point she got her back-up date lined up? Or was she more impatient and tired of waiting for him after many, many dates previously had gone south, and after five minutes called to arrange another date? Either way, the other date had enough time to get a phone call, get dressed for the prom, get over to pick her up, and meanwhile the guy with the engagement ring was still AWOL. The tone of the song is sad and wistful. Too bad there wasn’t an answer song by some other recording artist. It might have been a song about the thrilling time she had with the other guy who promptly showed up, took her to the graduation dance, and was on the ball from the moment go.

In 2006 “Pink Chiffon” resurfaced in popular culture with the Hollywood release of the movie Laura Smiles. The movie is about Laura (Petra Wright) who while in her mid-twenties suffers the loss of her fiancée Chris (Kip Pardue) when he is run down by a taxi in downtown New York City. The film jumps nine years later to when Laura has remarried and given birth to a child. Yet, the pain of her past prompts her to embark into a series of promiscuous and self-destructive extramarital affairs. “Pink Chiffon” was featured in the movie, recasting the song in even more dire circumstances than it’s original setting and the cost of being tardy.

Mitchell Torok continued writing songs including “The Redneck National Anthem” for Vernon Oxford who had a Top 20 hit with the song on the Billboard Country chart in 1976. In 1977 Mitchell was commissioned to paint a 110-foot, five-panel mural titled The History of the Grand Ol’ Opry. The mural was a fund raiser for the adjacent Hank Snow Abused Children’s Foundation. After the death of Elvis Presley, Torok notably created the ELVIS-A-RAMA. This was a mural 12 feet high and 125 feet long. It was featured with a 22 minute light and music show of Elvis’ life. As of this writing in January 2017, Mitchell Torok is 87 years old and living in Texas.