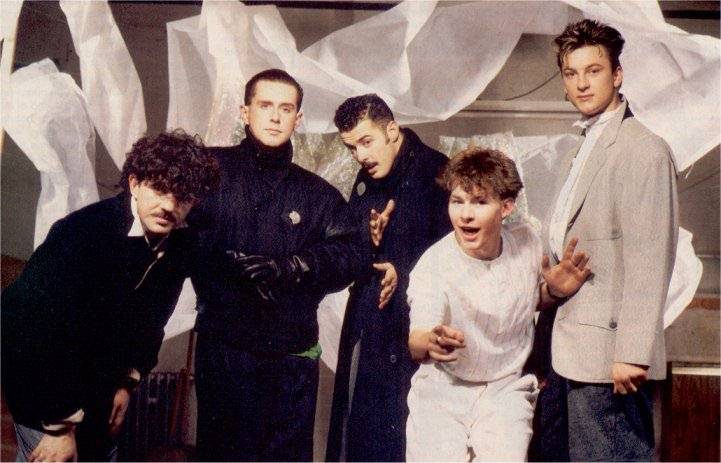 #1201: Power Of Love by Frankie Goes To Hollywood

William Johnson was born in 1960 in Liverpool, UK. Growing up, his nickname was Billy. In 1965 he wrote his first song on a glockenspiel. At the age of 13 he got the nickname Joyful Johnson and dyed his hair. He attended school with less frequency due to being bullied in response to his androgynous appearance. He was influenced by David Bowie, Marc Bolan, the Velvet Underground and Andy Warhol and bought a guitar through the sale of cigarettes. At the age of 14 he took the name Holly Johnson in tribute to the actress Holly Woodlawn, a Puerto Rican transgendered actress and friend of Andy Warhol. In 1976 Holly Johnson became part of the Demi Monde in Liverpool’s hedonistic counter-culture. In 1977, Johnson became part of the punk/new wave band Big In Japan. After that band split in 1979, Johnson continued to pursue a musical career. In 1980 he was invited to join Frankie Goes To Hollywood.

Frankie Goes To Hollywood formed in 1980. In addition to Holly Johnson there was Peter Gill on drums and percussion, Brian Nash on guitar and vocals and Paul Rutherford on vocals. Gill was born in Liverpool in 1964. Brian Nash was born in 1964 in Liverpool. In 1979 Johnson, Gill and Nash were members of a punk band named Sons And Egypt. Rutherford was a member of the Liverpool punk band The Spitfire Boys from 1979-80. Johnson and Rutherford also were briefly part of a band called The English Opium Eaters who opened a few times for The Clash. Rutherford joined FGTH after seeing them perform in 1980. Rutherford and Johnson had first become acquainted at outside gay bar in Liverpool in 1976. Rutherford remembers Holly “was lying on a car bonnet, in a doctor’s coat with a silver mask on, singing Somewhere Over The Rainbow.” There was a fluid period of lineup changes, and Mark O’Toole became the bass player for Frankie Goes To Hollywood.

Paul Rutherford recalls the gigs where the band played in Liverpool. “…we employed two girls, sisters, who we called The Leather Pets, and we used to chain them up on stage in all the kind of S & M gear, and they were beautiful. We had a girl called Elise Farber who brought real Hollywood glamour. She was from LA and she wore fifties clothes and she had a bleached David Bowie quiff and she’d come on an introduce us and just hang out because we created this little kind of gang. We wanted it to be like ‘a happening’. What are we going to do today? Let’s fill the drum with glitter, or we are going to hang fishnets from the wall. Or a theme with guns everyone would have a gun. We’d have drag queens and motorbikes. It was spontaneous and the crowd loved it they’d be wondering what we were going to do next. Suddenly, the music press got hold of it. The NME reviewed a gig and said ‘these are the new ones to watch’.” At some of the concerts audience members got free Frankie Goes To Hollywood condoms.

With the release of their first single, Holly Johnson divulged that the origins of the group’s name was owed to a poster from The New Yorker magazine. A headline in the poster read “Frankie Goes To Hollywood,” with a picture of Frank Sinatra below the headline. The poster was the work of Belgian artist Guy Peellaert.

“Relax” was released in October 1983. It slowly climbed up the UK singles chart. It became the #1 song in the UK on January 22, 1984, where it remained for five weeks. This was despite being banned by the BBC for its suggestive lyrics about having sex. The song peaked at #13 on CFUN, #10 on the Billboard Hot 100. Elsewhere in Canada, the song made the Top Ten in Calgary, Toronto and Montreal.

Their next single release was an anti-war song titled “Two Tribes”. The song featured figures representing Ronald Reagan and USSR leader Konstantin Chernenko having a wrestling match. The song’s lyrics asked “are we living in a land where sex and horror are the new gods?” In the summer of 1984, at the height of the Cold War, “Two Tribes” spent nine weeks on the top of the UK singles chart. But it only managed three weeks on the CKLG Top 30 Singles chart peaking at #29. In the USA it stalled beneath the Top 40 where it peaked at #43 on the Billboard Hot 100. But in Montreal and Toronto the song climbed to #3.

FGTH’s next single release was “The Power Of Love”. “The Power Of Love” was co-written by four of the five bandmates in Frankie Goes To Hollywood: Holly Johnson, Mark O’Toole, Peter Gill and Brian Nash. The cover on the single was an image of the Assumption of the Virgin and in the song’s video there was a nativity scene. Despite the religious overlay the song had no religious lyrics or references to Christmas. Instead, the song concerned the power of love and its capacity to keep lovers protected from dark forces that include metaphorical vampires. When love is the center of two people’s lives, it can transform everything. Holly Johnson told reporters that passion and love have spiritual qualities.

“The Power Of Love” climbed to #7 in Toronto and #15 in Vancouver. These were the only radio markets where the song made the Top 40 in North America. Subsequently, “Welcome To The Pleasuredome” climbed into the Top 20 in both Montreal and Toronto, but didn’t enter the singles chart in Vancouver. The single stalled at #2 on the UK charts. And in 1986 FGTH had a #4 hit with “Rage Hard”. The song’s title came from the poetry of Dylan Thomas when he wrote “do not go gentle into that good night.” In 1987 Frankie Goes To Hollywood disbanded. Their last gig was before a crowd of 65,000 at Wembley Stadium in 1987.

In 1989 Holly Johnson was featured along with Paul McCartney, The Chieftains and Gerry Marsden in the Charity for the Hillsborough Disaster Fund recording of “Ferry Cross The Mersey”. The Hillsborough Disaster involved a fatal human crush of British football fans at a match between Liverpool and Nottingham Forest in Sheffield, England. Ninety-six people died and 766 fans sustained injuries.

In 1991, Holly Johnson was diagnosed with HIV and did not anticipate having much time left to live. he wrote his autobiography, A Bone In My Flute, where he discussed his struggle to accept his same-sex attractions. He came out to the press in 1993 and published his autobiography in 1994. Jimmy Sommerville of Bronski Beat presented Holly with a legendary handbag at the book launch. In 1995 Johnson hosted Live At The Lighthouse on TV. The telecast was a fundraiser for the an AIDS hospice named the London Lighthouse. During the TV special Holly sang “The Power Of Love” in a duet with Ann Dudley of the Art Of Noise. In 1986 Johnson began to spend more time painting and from the mid-90’s has pursued painting as his principal artistic outlet. His paintings have been exhibited in the Tate Liverpool and the Royal Academy of Arts near Piccadilly Circus.

Between 1979 and 2016 Johnson had released 16 singles. Of these, both “Love Train” and “Americanos” climbed to #4 on the UK charts in 1989. Both were tracks from his album Blast. In 1999 Johnson’s solo version of “The Power Of Love” from his Soulstream album climbed to #56 on the UK singles chart. In 2014 Holly Johnson released his fifth studio album, Europa. The album coincided with a 17-date Dancing With No Fear tour. That same year Johnson released his first live album, Unleashed From The Pleasuredome. In 2016 a song Johnson co-wrote was featured in the film, Eddie The Eagle, about the British skier Michael Edwards who represented his country in the 1988 Winter Olympics in Calgary, Alberta.

In 2004, with Holly Johnson disinterested in a reunion, original band members Paul Rutherford, Peter “Ped” Gill and Mark O’Toole staged the audition to find “new raw talent” for a lead vocalist for the band to perform at a charity concert at Wembley Stadium in November 2004. The winner was Ryan Molloy aged 28. In 2005, the same lineup, without originals Johnson and Nash, went on tour to a number of continental European cities. Jed O’Toole, an original FGTH bandmate from 1980-82 joined brother Mark O’Toole, Paul Rutherford, Peter Gill and Ryan Molloy. The reformed FGTH also performed at the Big Gay Out in Hyde Park in London. By 2007 the reformed Frankie Goes To Hollywood disbanded.

Between 1999 and 2017 Brian Nash released four solo albums. After Frankie Goes To Hollywood split, Peter Gill formed a band named Ltd. Noise. Paul Rutherford was the other gay member of the band and he eventually moved to New Zealand with his civil union partner Perry Newton. Paul Rutherford released “Get Real” which made the Top 50 UK singles chart in 1989. It was the first single release from his debut album Oh World. In 2010 Rutherford released his second album, The Cowboy Years.