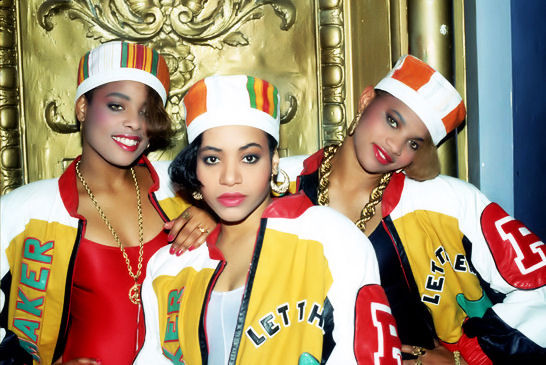 Cheryl Renee James was born in 1966 in Brooklyn, New York. She later went by the stage name Salt. Sandra Jacqueline Denton was born in 1964 in Kingston, Jamaica. She moved to join her family in Queens, New York, in 1970, at the age of six. While she was a child she was sexually molested. Both James and Denton attended nursing school at Queensborough Community College in Queens. In 1985, James and Denton were working as customer service representatives at Sears. The duo recorded their first single “The Show Stoppa”, which was a minor R&B hit in ’85. The duos’ original name was Super Nature. However, they changed their name because in “The Show Stoppa” they rap the lines “Right now I’m gonna show you how it’s supposed to be ‘Cause we, the Salt and Pepa MCs”. This resulted in radio stations getting phone calls requesting “The Show Stoppa” by Salt & Pepper.

In 1986 James (known as Salt) and Denton (known on stage as Pepa), met Deidra Muriel Roper (aka DJ Spinderella). Roper was born in 1970 or 1971 in New York City. in 1986, Roper was introduced to Salt-N-Pepa producer Hurby Azor, prior to the Salt-N-Pepa was scheduled to perform at the Westchester Music Festival. The third member of Salt-N-Pepa, Latoya Hanson, was a ‘no show’ at numbers of rehearsals. Salt and Pepa wanted a reliable third member of the emerging trio. Roper, known by her stage name Spinderella, became the third member of the female trio. Since she was 16 at the time of joining, Ropers’ parents had to give permission for her to travel around the country. In late 1986, Salt-N-Pepa released their first album, Hot, Cool, & Vicious. A single titled “Tramp” climbed to #21 on the Billboard Hot R&B/Hip-Hop Singles chart.

The B-side to the single, “Tramp”, was a track titled “Push It”. 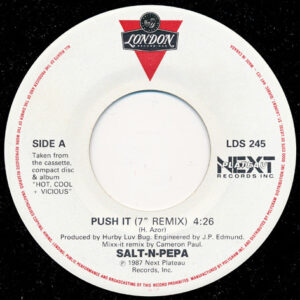 As the B-side got airplay and spins in the dance clubs, it was released as a single.

“Push It” was cowritten by Hurby “Luv Bug” Azor and Ray Davies. Azor was born in Port-de-Paix, Haiti. He discovered Salt-N-Pepa in 1984 and performed on keyboards and backup vocals, as well as appeared in the music video for the song. Azor also dated Salt from 1984 to 1989, during which time he conceived a baby with another woman. Azor later wrote “Let’s Talk About Sex” for the trio.

In “Push It”, “Salt-N-Pepa sing “Boy, you really got me goin’/You got me so I don’t know what I’m doin’.” This is a line from the Kinks “You Really Got Me” from 1964, where the UK band sings “girl” instead of “boy” at the start of the line. For this, Ray Davies of the Kinks got a songwriting credit. Raymond Douglas Davies was born in 1944 in London, UK. Davies took an interest in music out of high school and was in the Ramrods in 1963. They accompanied UK pop singer and future Mr. Universe, Rick Wayne, on a tour of U.S. air bases. Known as the Kinks by late ’63, they got a contract with Pye Records, and released “You Really Got Me” in 1964. In 1999, “You Really Got Me” was inducted into the Grammy Hall of Fame. In 2004 Davies was awarded the Most Excellent Order of the British Empire by Queen Elizabeth II.

Ray Davies wrote the hits for the Kinks. These included “All Day And All Of The Night”, “Tired Of Waiting For You”, “A Well Respected Man”, “Dedicated Follower Of Fashion“, “Dead End Street“, “Sunny Afternoon”, “Apeman“, “Lola” and “Come Dancing”.

“Push It” is a song with overt sexual overtones. The singers tell the listeners to “get up on this and push it real good.” While the Kinks riff “Boy you really got me going, you got me so I don’t know what I’m doin’,” follows. Clearly, these women are “number one in a hot party show,” as the song says.

In 1988, the female hip-hop trio released their second album, A Salt with a Deadly Pepa. It reached the Top Ten on Billboard Magazine’s Top R&B/Hip-Hop Albums chart. The lead single, “Shake Your Thang”, made it to #9 in the Netherlands. And in 1989, a subsequent track, a cover of the Isley Brothers’ “Twist And Shout”, climbed to #4 in the UK and #5 in the Netherlands. In 1989 the trio was nominated for a Grammy Award in the Best Rap Performance category for the single “Push It”.

In 1990, Salt-N-Pepa had a #1 hit on the Billboard Hot Rap Songs chart with “Expression”. The single was the debut hit from the Salt-N-Pepa album Black’s Magic. A followup single, “Do You Want Me” climbed to #5 in the UK in 1991. But, it was their next single release, “Let’s Talk About Sex”, that gave Salt-N-Pepa their biggest hit single. “Let’s Talk About Sex” peaked at #1 in Vancouver. Internationally, the single climbed to #1 in Australia, Austria, Belgium, the Netherlands, Portugal, Switzerland, West Germany and Zimbabwe. It was a #2 hit in Sweden and the UK, #3 in New Zealand and Norway, #4 in Ireland, #5 in Denmark, #8 in Finland, #11 in France and #13 on the Billboard Hot 100 in the USA.

In 1992 Salt-N-Pepa was nominated for another Grammy Award in the Best Rap Performance for a Duo or Group category, for “Let’s Talk About Sex”.

A final track released as a single from Black’s Magic was a Salt-N-Pepa cover of a 1964 song by the Byrds, titled “You Showed Me”.

In the fall of 1997, Salt-N-Pepa released their final studio album Brand New. The album was on the Red Ant label, and in the midst of the rollout of Brand New Red Ant went bankrupt. Two years later they released a compilation ‘Best Of’ hits album. Pepa got married in the summer of 1999 and entered a tumultuous relationship that came undone in 2001. Salt left the trio, and Salt-N-Pepa officially split up in 2002. Spinderella became a radio personality on KKBT 100.3-FM in Los Angeles. Salt revealed to a reporter that she suffered from bulimia.

In 2007 Salt-N-Pepa reunited and that fall starred in The Salt-N-Pepa Show. This was a reality show documenting the events from the life of Salt-N-Pepa in the years since their breakup at the start of the decade. In 2010, Sandy “Pepa” Denton published her memoir Let’s Talk About Pep.

In 2017–2018, the group toured as part of the I Love the 90’s tour, performing in various locations, including in the UK Wembley Arena, Glasgow SSE, Liverpool Echo Arena and Birmingham. A film about Salt-N-Pepa was aired on the Lifetime channel in the USA in January 2021.