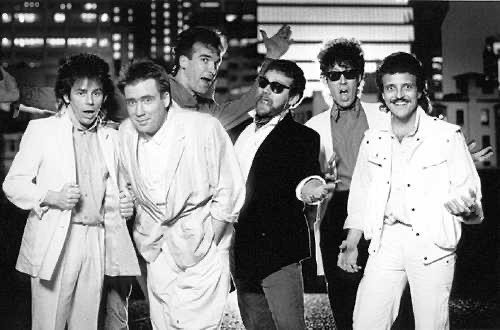 Over the following year Henderson, Laturus and Neville were replaced by Steve Bosley (bass), John Watson (drums) and Simon Kendall (keyboards). Richard Baker joined Burton in the guitar section. Their live performances in Vancouver were infectious and a fan base soon followed them around from concert to concert. They got financial backing and a single, “Too Bad” was released in the fall of 1979. The tune spent 17 weeks on the CKLG charts, including 12 weeks in the Top Ten in the winter of 1979-80. In 1981 the single earned the band Composer of the Year and Single of the Year Juno Awards. They also won Best Album Graphics for Cognac and Bologna.

They got exposure the following year with gigs in Toronto, Mississauga and Montreal. Their followup single from Cognac and Bologna, “Chinatown Calculation“, was released in the fall of 1980. In Toronto, City TV featured Doug & The Slugs amusing music videos adding to their buzz.

In 1981 the band released their second album, Wrap It! From this album came the single “Real Enough”. 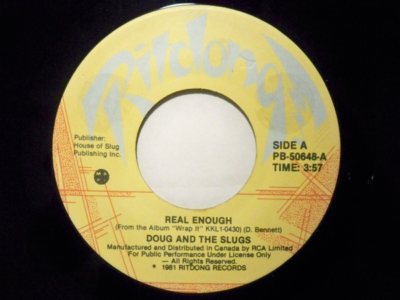 “Real Enough” was written by Doug Bennett. The song is an invitation to grab and take hold of the real thing when it comes along. When something is “real enough” it is a catalyst for intimacy and deep connection. As the lyrics explain: “Real enough, grab it and take it away to the place where nobody watches.”

In 1982 the band released their third studio album, Music For the Hard of Thinking. The debut single from this album was “Making It Work”. The tune made the Top 30 on the Canadian RPM singles chart. Astonishingly, it only got airplay in Vancouver’s AM pop stations and didn’t even make the pop charts here for this local band. In 1983 they won a Juno Award for Most Promising Group of the Year. A greatest hits album was released in 1985 followed by Popaganda and Animato. From Popaganda came “Day By Day”, a single that climbed to #10 in Regina (SK), and “Love Shines” which peaked in Regina at #11 in the spring of ’85.

In 1988 they released one of their most successful albums, Tomcat Prowl. It featured the only single, the title track, that would climb into the Canadian RPM Singles Top 30 after “Making It Work”. “Tomcat Prowl” was produced by Brian MacLeod who had won Juno Awards for his previous work with The Headpins and Chilliwack. “Tomcat Prowl” is a song about a guy who is on the prowl to find a woman to provide some sweetness in his life after the daily grind.

In 2009 formative Slugs bandmates, Baker, Bosley, Burton, Kendall, and Watson, reunited and gave singer Ted Okos the nod to be their lead singer. Though they still perform in concert as Doug & the Slugs, Doug Bennett is missed. Bennett died in 2004 due to complications related to cirrhosis of the liver. A Vancouver Sun obituary by John Mackie, Canada’s improbable rock star: Toronto-born Singer-songwriter Doug Bennett an Everyman in a Sally Ann Suit, included some reflections by Slugs bandmate, keyboard player Simon Kendall: “He hadn’t been looking after himself… his health has not been good for the last couple of years, so it wasn’t a total surprise. But nobody realized how sick he was.” Mackie wrote: “Kendall thinks Bennett struck a chord with the masses because of his persona, which was humourous and witty but also had an edge.” Kendall added,  “Especially in the early years, he really tried to stay off  the beaten path, and I think he did a great job… He had some unique and very interesting lyrics. An anachronistic style, if you like. He was a bit of R&B, he was a bit 1940s, he was a bit Tex-Mex. As a writer, I think he deserves more credit than he gets for being intelligent. He wrote some beautiful and quite provocative songs.”

One response to “Real Enough by Doug and the Slugs”