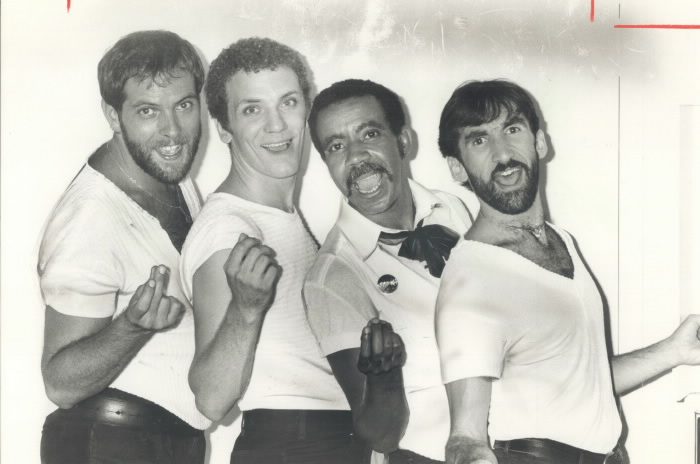 #611: Silhouettes by The Nylons

The Nylons are an a cappella group that formed in 1978, based in Toronto. The original members were all gay men: Dennis Simpson, Paul Cooper, Claude Morrison and Marc Connors. They released their self-titled album in 1982. There were some lineup changes after 1979 when Dennis Simpson left. By the time the Nylons released their first album, Arnold Robinson was the newcomer joining the other original group members.

On their debut album the Nylons tracks included “The Lion Sleeps Tonight”, “Love Potion #9” and “Up On The Roof”. Their album was an instant hit in Toronto and elsewhere as their fan base spread across Canada and beyond. The Nylons released a second album in 1982 titled One Size Fits All. The tracks from the album included a number of hits from the early rock era: “Town Without Pity” and “Silhouettes”. It also included a remake of the Supremes hit from 1970, “Up The Ladder To The Roof”. “Silhouettes” is a song recorded in 1957 by a black doo-wop group called The Rays from Brooklyn, New York.

The Rays recording of “Silhouettes” climbed to #3 on the Billboard pop chart. It spent nine weeks in the Top Ten on the Cashbox pop singles chart, also peaking at #3 in November 1957 for four consecutive weeks. The songwriters were Bob Crewe and Frank Slay. Slay was born in 1930 in Dallas, Texas, and moved to New York City in 1951 with the dream of having a songwriting career. He met Bob Crewe (born in New Jersey in 1930) in 1953. The pair wrote “Silhouettes” after Crewe saw a couple making out through a window shade while he was on a passing train. Crewe took his initial lyrics to Slay who added more to the song. Frank Slay worked for Cameo-Parkway Records and heard The Rays audition. He decided they’d be the ideal group to record the song.

The lyrics to “Silhouettes” picture a guy who sees a couple making out behind drawn shades in their home. However, the guy thinks the home belongs to his girlfriend and she is two-timing him. He knocks on the door full of fury only to discover two strangers who open the door. It is at that moment he realizes he’s knocked on a door to a house that looks similar to his girlfriend’s home a block away. He rushes over to her home where she is waiting for him. When she opens the door she greets him and he recalls that he “loved you like I never loved you my sweet.” He pictures a life together from that night forward.

With the Nylons cover of “Silhouettes”, the song took on a homoerotic overtone. The male quartet are singing “wonder why I’m not the guy” on behind the shade. But the inference for anyone who saw the Nylons live would be that the other stranger behind the shade was also male. The song climbed to #7 in Vancouver and #21 in Toronto.

Frank Slay and Bob Crewe also wrote a novelty tune titled “La-Dee-Dah” for Billie & Lillie in 1958. In 1959 they penned a song titled “Tallahassee Lassie”, together with Frederick Picariello. Picariello’s stage name was Freddie Cannon. Crewe and Slay were happy to have Freddie Cannon record the song which climbed into the Top Ten. Frank Slay latter produced “Incense and Peppermints” for the Strawberry Alarm Clock in November 1967.

Bob Crewe began collaborating with Bob Gaudio in 1960. They co-wrote many songs for Frankie Valli and the Four Seasons, including “Sherry”, “Big Girls Don’t Cry”, “Walk Like A Man”, “Dawn (Go Away)”, “Ronnie”, “Rag Doll” and “Let’s Hang On”. They also co-wrote Frankie Valli’s solo hit in 1967, “Can’t Take My Eyes Off You”. During the ’60’s, Bob Crewe also wrote songs that were hits for other recording artists. These include “Silence Is Golden” by The Tremeloes and “The Sun Ain’t Gonna Shine Anymore” by The Walker Brothers. At the end of the Sixties, Crewe produced “Jean” for Oliver, a #2 song; And Oliver’s “Good Morning Starshine” from the musical Hair. In the ’70s Bob Crewe co-wrote “My Eyes Adored You” for Frankie Valli and “Lady Marmalade” for Patti LaBelle.

Bob Crewe also founded several record labels that started recording careers for Mitch Ryder and the Detroit Wheels, The Toys and Norma Tanega. In 1967 he also drew on a Pepsi Commercial tune and recorded “Music To Watch The Girls Go By” credited to the Bob Crewe Generation. In 2004 Crewe spearheaded the mounting of The Jersey Boys, a musical of the music of Frankie Valli and the Four Seasons. In the film version of the musical, Crewe is portrayed as openly gay. With the proceeds he earned from the musical and the film, Bob Crewe established a foundation to support persons living with AIDS.

The Nylons cover of the Frank Slay-Bob Crewe composition of “Silhouettes” climbed to #7 in Vancouver. But in the major radio markets of Ottawa, Toronto, Hamilton and Montreal, it stalled at #20 in Ottawa and cracked the Top 30 in the other three. In 1983, a single release of “That Kind Of Man” made the Top 30 in Yellowknife, Northwest Territories.

In 1986, the group appeared on the Canadian children’s TV show Sharon, Lois & Bram’s Elephant Show. The show was hosted by a trio of the entertainers and singers known as Sharon, Lois & Bram. The Nylons appeared in an episode of the TV show, Treasure Island, and sang “The Lion Sleeps Tonight”. They released a single of the old Tokens hit with modest success. The next year they released their fourth album, Happy Together. On the Happy Together album The Nylons covered a song by a band named Steam from 1969 titled “Kiss Him Goodbye”. They also released a cover of “Happy Together” which climbed into the Top 20 in Wilmington, Delaware, and Minneapolis/St. Paul.

Gavin Hope, from Calgary, was just six years old in 1978. But he moved to Toronto and at the end of 1992 became a member of The Nylons at the age of 20, replacing Paul Cooper. Garth Mosbaugh also joined The Nylons, replacing Billy Newton-Davis (who had replaced Marc Connors in 1991, as Connors had died of AIDS) in 1994. Between 1982 and 2011 there were twenty-two albums released. On October 24, 1992, The Nylons sang the Canadian national anthem, “O Canada”, at Atlanta-Fulton County Stadium. The occasion was the start of the sixth game of the 1992 World Series between the Toronto Blue Jays and the Atlanta Braves. The Blue Jays went on to win the series.