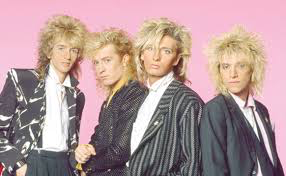 Mark Holmes was born in the UK and lived in Manchester until the family moved to Toronto. He met several other musicians and formed a punk band that played covers to The Police and other new wave bands. After a lineup change, Holmes was playing guitar and the lead vocalist, Chris Steffler was the drummer and Sergio Galli was a second guitarist. The trio became Platinum Blonde. They got a record deal with CBS in 1983. Their debut album, Standing In The Dark, earned them two Video Of The Year nominations at the 1984 Juno Awards. But it was their second album, Alien Shores, which included “Crying Over You,” a #1 single on the Canadian RPM charts in 1985, and in Vancouver.

Another Top Ten hit in Canada from Alien Shores was “Situation Critical.” “Situation Critical” is a song about a guy who has moved out of a relationship and is living on his own. Unlike some lonely people, he likes living on his own. He dares his ex, “Don’t you go messin’ with my heart again. Don’t you go messin’ with me.” He also proudly declares “I’m on the roam.” To roam can mean to drift, but also to be on the prowl. Now that he’s single again he has his freedom. But why is the situation critical? He’s drawn a line in the sand regarding how to take care of his heart. When that line is crossed the situation is critical and he has to rally his strength to regain his freedom and strike out on his own again. Others look at his changed circumstances and say he’s crazy and lost his reason. They also allege his memory is hazy, perhaps to diminish the way he feels he’s been mistreated. But he doesn’t care what others think anymore.

Platinum Blonde’s third single, “Hungry Eyes,” also made the Top Ten in Vancouver. With the release of Alien Shores, Platinum Blonde featured a fourth band member named Kenny McLean. He played the keyboards and bass guitar. Chris Steffler left the band and was replaced by Alexander Tukatsch, who went by the name Sascha. A third album was released in 1987 titled Contact. The title track was a Top Ten hit in Vancouver, as was “Fire.”

“If You Go This Time,” made the Top 20 in Vancouver. The band released another album in 1990, but soon parted ways. They reunited in 2012 and released an album titled Now And Never. With the release, they mounted a reunion tour.

After the election of Donald Trump to the presidency of the United States of America, Mark Holmes told a reporter for the Calgary Herald: “People need to become hippies again.” Eric Volmers of the Calgary Herald finds the statement ironic, given Platinum Blonde were “the epitome of Canada’s fledgling video age of the 1980s, where successful acts understood that a carefully constructed, video-friendly image was key to burrowing into Canada’s pop-culture consciousness.” So, not exactly hippies.

In 2017, Platinum Blonde did a show in White Rock, BC, another at Ambleside Park in West Vancouver that summer, and at the Queen Elizabeth Theatre in Vancouver in November. In 2019 Platinum Blonde appeared at the Hard Rock Casino in Vancouver on April 27th. They will appear in Saskatoon in August as part of a lineup with Colin James, Honeymoon Suite, Streetheart, Headpins, Blue Oyster Cult, The Romantics, Quiet Riot, Loverboy and Chilliwack.