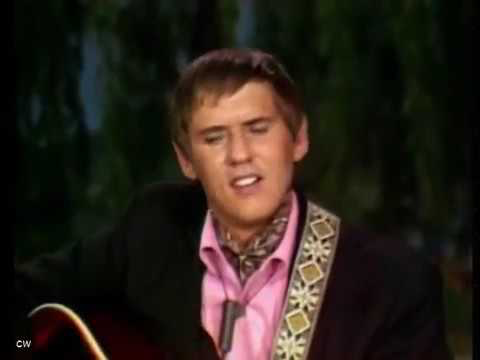 Henson Cargill was born in Oklahoma City, Oklahoma. His grandfather was a liberal mayor elected several times in the 1920’s who was opposed to the Ku Klux Klan. Henson Cargill studied veterinary medicine at a state university in Fort Collins, Colorado. Returning to Oklahoma City, he eventually became a deputy sheriff. At that time he was invited to play with a group called The Kimberleys. In 1962 he became the host of a TV show called Country Hayride. This led to an opportunity to record some songs in Nashville in 1967. One of these songs had been passed over by other recording artists. The name of the song was “Skip A Rope”. The Nashville establishment was hesitant to take a chance on “Skip A Rope”, which blamed such cultural problems as dishonesty and racism on parents. The one company willing to give it a shot was Fred Foster’s Monument Records. “Skip a Rope” was a socially controversial song that invited listeners to pay attention to what children say to each other. The children in the song talk about parents having a physical fight causing a younger sister to have more bad dreams. They discuss tax evasion, playing to win and hating people based on the color of their skin. The lyrics advance the idea that what children talk about is a reflection of the ideas and examples offered by their parents.

“Skip a Rope” became a huge country hit, topping the Billboard Country charts for five consecutive weeks. It crossed over into the Billboard Hot 100 where it peaked at #25. In Vancouver the song peaked at #4. The best Top 40 radio chart runs elsewhere included Casper, WY (#1), Bakersfield (#2), Denver, San Diego, San Francisco and Oklahoma City (#4), San Bernardino (#5), Sudbury, ON (#6), Chicago, Detroit and Madison, WI (#7) Windsor, ON, and Roanoke, VA (#8). “Skip A Rope” was Henson Cargill’s first of twenty-three singles he released between 1967 and 1980. While sixteen of these made the Billboard Country charts, only “Skip A Rope” made the Billboard Hot 100.

“Skip A Rope” was one of a number of songs that charted well on the Vancouver pop charts that concerned injustice. Gordon Lightfoot’s “Black Day In July” climbed up the charts two months after “Skip A Rope”, in May 1968. Lightfoot’s song was a ballad about the July 1967 riots in Detroit. “Black Day In July” noted that “the hands of the have-nots keep falling out of reach.” In 1965, Jody Miller lamented the ostracism of a boy with long hair in “Home Of The Brave“. And in 1966, Janis Ian sang about the challenges of inter-racial dating in “Society’s Child”.

Between rope skips, we learn from Henson Cargill that “Daddy hates mommy, mommy hates dad/Last night you should’a heard the fight they had.” The song was a rare admission that not all was well in every household across America. In some homes parents fought each other and children were afraid of the consequences, often for the mother. The British pop singer, Lulu, would tell the press decades later that she grew up fearful of the harm her parents did to each other when they were fighting. Turning to singing was a necessary diversion from the toxic and violent household environment she was raised in. Dion DiMucci also grew up in a household where his parents argued and had physical fights. He told the press later, “There was a lot of unresolved conflict in my house… My pop, Pasquale, couldn’t make the $36-a-month rent on our apartment at 183rd and Crotona Avenue. He was a dreamer, a failed vaudevillian, and sometimes Catskills puppeteer. He’d talk big and lift weights he’d made from oilcans, (while Frances, Mrs. DiMucci, took two buses and the subway downtown to work in the garment district on a sewing machine). When they’d start yelling, I’d go out on the stoop with my $8 Gibson and try to resolve things that way.”

Skipping of jumping rope developed in ancient times. The Greeks, Egyptians and Chinese each had artisans who wove rope from hemp. In an article on the History of Skipping, Scott Robert-Shaw writes, “Rope makers needed to jump over the rope to retrieve the strands of hemp, this developed into a skill and perhaps their children began to imitate and invent games with small pieces of rope.” Dutch settlers took rope skipping with them to America. In the “1700s rope skipping was mainly performed by boys…. the prevailing sentiment at the time was that girls should not be physically active in case they harmed themselves.” By the 1800s skipping rope was seen as an acceptable game for both boys and girls to play. There was individual skipping, long rope skipping with two individual rope turners, and double dutch where two ropes were turning in opposite direction.

Numbers of skipping songs emerged over time that both the rope turners and the skipper would sing. One of these was “My mother and your mother were hanging up the clothes. My mother punched your mother in the nose. What color was the blood?” Then the skipper would spell out the letters of the various colors of the blood as the rope was turned ever faster. For example, “R-E-D, P-U-R-P-L-E, B-L-U-E.” Other skipping songs include: “Cinderella dressed in yellow/ Went downstairs to kiss her fellow/How many kisses did she give?/One, two, three, four, five . . .” And “Mabel, Mabel, set the table/Just as fast as you are able/Don’t forget the salt, sugar, vinegar, mustard, red-hot pepper…”

“Skip A Rope” mentioned children repeating what their parents tell them: to “hate your neighbor for the shade of his skin.” The song rose up the pop charts during the Civil Rights movement. The story of African-American seamstress, Rosa Parks, refusing to give up her seat to a white man on a Montgomery, Alabama, public transit bus in 1955, is often recounted as the spark that set in motion the Civil Rights movement. On December 1, 1955, Parks chose not to adhere to the “Negroes-in-the-back-of-the-bus” policy on municipal Montgomery buses. She subsequently found to be in violation of the existing segregation laws and found guilty. Parks also lost her job. Rev. Martin Luther King Jr. began a boycott of the transit system in Montgomery which lasted over a year. The United States Supreme Court found bus segregation unconstitutional.

Hating a neighbor for the shade of their skin took on different outcomes in the wider society. One of these was neglect. The King Institute recalls the catalyst for the sanitation workers strike that Dr. Martin Luther King Jr. championed in his final few months before he was assassinated on April 4, 1968. “On February 1, 1968, two Memphis garbage collectors, Echol Cole and Robert Walker, were crushed to death by a malfunctioning truck. Eleven days later, frustrated by the city’s response to the latest event in a long pattern of neglect and abuse of its black employees, 1,300 black men from the Memphis Department of Public Works went on strike. Sanitation workers…demanded recognition of their union, better safety standards, and a decent wage.” The strike ended on April 16, 1968, after President Lyndon Johnson sent Undersecretary of Labor, James Reynolds, to Memphis to resolve the strike between garbage collectors and the City of Memphis.

Henson Cargill was featured on the Mike Douglas Show and the Tonight Show with Johnny Carson. In early 1969, Henson Cargill released a single titled “None Of My Business”. The song echoed the viewpoint of a person who is aware of a number of things going on around them, but concludes in each case that it’s none of their business. The situations mentioned in the song include rat-infested  housing with malnourished children, neighbors screaming for help, bad news from Vietnam and China testing bombs, national debt and directionless youth. The subject of the song goes to church, meditates and contributes to the collection plate. But the fate of others in society, he concludes, are none of his business. The song pointed out the hypocrisy of some people who say one thing about what they believe, but don’t practice what they preach. While the song climbed to #8 on the Billboard Country charts, it didn’t crack the Billboard Hot 100. With Joe South singing about the “Games People Play” and Ray Stevens singing about hypocrisy in “Mr. Businessman”, radio listeners could only take so many songs about people who had their heads in the sand.

Johnny Cash became a friend of Henson Cargill and a godfather to Cargill’s son, Cash Cargill. In the early 1980’s Cargill stopped touring and started a night club called Henson’s. In the mid-80’s Cargill was on the Bill Aken Show and told a story about his pet buffalo named Buford. At the age of 66, Henson Cargill died from complications emerging after surgery in 2007.