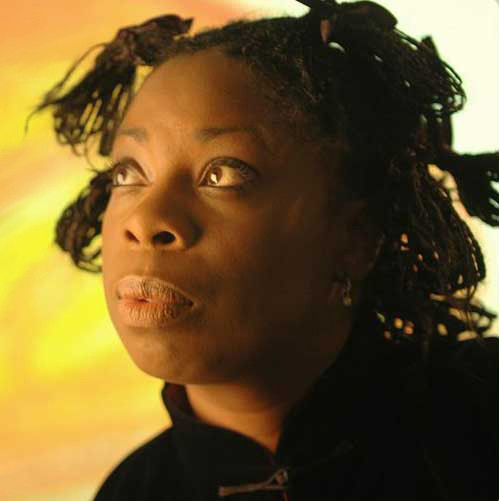 Tasmin Archer was born in Bradford, Yorkshire, in 1963. After she graduated from school, she worked as a sewing machine operator. Subsequently, she learned to type and became a clerk at Leeds Magistrates’ Court. Into the 80s she joined a band called Dignity. Later, she was part of a group called The Archers. In 1990 she signed a record contract with EMI. 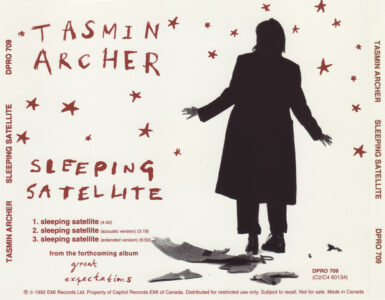 “Sleeping Satellite” was cowritten by Tasmin Archer and British songwriters John Beck and John Hughes. The lyrics of the song reference the Apollo Missions of the 1960s, characterized as “man’s greatest adventure.”

On October 4, 1957, the Soviet Union launched the Sputnik 1, the first artificial satellite, into orbit. This triggered the “space race” between the United States of America and the Soviet Union. On April 12, 1961, Soviet cosmonaut Yuri Gagarin became the first person in space and the first person to orbit the Earth. Then on May 5, 1961, Alan Shepard became the first American astronaut to circle the Earth. Shepard spent 15 minutes in space. After being recovered from the Atlantic Ocean, he received a congratulatory telephone call from President John F. Kennedy.

On May 25, 1961, President Kennedy addressed the United States Congress, holding forth a grand vision for the nation. “I believe that this nation should commit itself to achieving the goal, before this decade is out, of landing a man on the Moon and returning him safely to the Earth. No single space project in this period will be more impressive to mankind, or more important for the long-range exploration of space; and none will be so difficult or expensive to accomplish. We propose to accelerate the development of the appropriate lunar space craft. We propose to develop alternate liquid and solid fuel boosters, much larger than any now being developed, until certain which is superior. We propose additional funds for other engine development and for unmanned explorations—explorations which are particularly important for one purpose which this nation will never overlook: the survival of the man who first makes this daring flight. But in a very real sense, it will not be one man going to the Moon—if we make this judgment affirmatively, it will be an entire nation. For all of us must work to put him there.”

On January 27, 1967, the Apollo I space mission to the moon, was destroyed in a fire. All three astronauts, Gus Grissom, Edward H. White Jr. and Roger B. Chaffee, died in the accident. Time Magazine reported NASA officials concluded the accident on Apollo I was due to “a blind spot.” The next mission named Apollo 4, was an uncrewed mission in November 1967, followed by another uncrewed mission named Apollo 5. The latter was the first to launch the Apollo Lunar Module, on January 22, 1968, from Cape Kennedy Air Force Station. Then, on April 4, 1968, the second uncrewed test of the Saturn V launch vehicle with Apollo 6, NASA was confident to proceed with sending a crew of astronauts to the moon.

On October 11, 1968, with the first live television broadcast from an American spacecraft, Apollo 7 was launched. Astronauts Donn Eisele, Walter Schirra, and Walter Cunningham, spent eleven days in space. On December 21, 1968, the Apollo 8 spacecraft was launched with astronauts James Lovell, William Anders, and Frank Borman. NASA reported that in the short trip involved circling the moon ten times in twenty hours. While the crew circled the moon on Christmas Eve, 1968, they read the first ten verses from the Book of Genesis on a live television broadcast. After they returned to earth several days later on December 27, 1968, they were named Time magazine’s “Men of the Year.” The trip to the moon was only 6 days, 3 hours and 42 seconds.

From March 3 to 13, 1969, the Apollo 9 space mission consisted of a crew of James McDivitt, David Scott, and Russell Schweickart. After launching on March 3, 1969, the crew performed the first crewed flight of a lunar module, the first docking and extraction of the same, one two-person spacewalk, and the second docking of two crewed spacecraft —two months after the Soviet Union performed a spacewalk crew transfer between Soyuz 4 and Soyuz 5. NASA reported the mission concluded on March 13 and was a complete success.

From May 18 to 26, 1969, the Apollo 10 spacecraft was NASA’s next mission to the moon. The astronauts on this voyage were Thomas Stafford, John Young and Eugene Cernan. Again, this mission involved a lunar orbit and the closest approach to the lunar surface. Then, the climax of the race to the moon was the Apollo 11 space flight with Buzz Aldrin, Neil Armstrong and Michael Collins. When the spacecraft lunar module landed on the Moon, Armstrong reported to the world “The Eagle has landed.” When he got out of his capsule to take a stroll, he said to 600 million who were following the event back on Earth, “That’s one small step for man, one giant leap for mankind.” Fellow astronaut, Buzz Aldrin, placed the American flag – the Stars and Stripes – on the surface of the Moon. 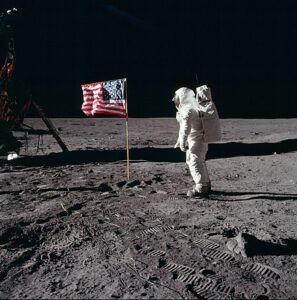 Moments after Aldrin placed the American flag on the lunar surface, he got a phone call from President Richard Nixon. Nixon said to astronauts Aldrin and Armstrong, “Hello, Neil and Buzz. I’m talking to you by telephone from the Oval Room at the White House. And this certainly has to be the most historic telephone call ever made from the White House. I just can’t tell you how proud we all are of what you have done. For every American, this has to be the proudest day of our lives. And for people all over the world, I am sure that they too join with Americans in recognizing what an immense feat this is. Because of what you have done, the heavens have become a part of man’s world. And as you talk to us from the Sea of Tranquility, it inspires us to redouble our efforts to bring peace and tranquility to Earth. For one priceless moment in the whole history of man, all the people on this Earth are truly one: one in their pride in what you have done, and one in our prayers that you will return safely to Earth.”

When the phone call was made from the White House to the Moon, the Moon was about 245,000 miles from the Earth. In the decades since the landing on the Moon, about 20 percent of Americans have become skeptical of the news story. Photos from the Moon of the Earth have no visible stars. Since there are no clouds on the Moon, stars should have been perpetually visible, and much brighter. On the Moon, the Sun is the only light source, and so all shadows must run parallel to one another. But, the shadows in the photos of the Moon from the Apollo 11 mission fall in various directions. As well, there should be no wind on the Moon, but once the American flag was erected on the lunar surface, the flag could be seen waving by millions of TV viewers. Skeptics suggest the moon landings were staged somewhere on domestic soil in the USA.

The effort to send a “man” to the moon is regarded in “Sleeping Satellite” as a “waste” of resources. The “giant step” imagined in the race to the moon is challenged. Archer wonders if humanity is ready to “carry the weight of this concept.” Is the effort – this race into space – one misadventure, and an object lesson where we “miss the mark?” The sleeping satellite in the title refers to the Moon.

Tom Ewing, writing in Freaky Trigger, said of “Sleeping Satellite”, that the song was articulating a sense of disappointment bordering on betrayal that having dreamed of the Moon – or indeed, because it got there – humanity now seems confined to a slowly boiling Earth.” The notion was reflected in the lyrics of Barry McGuire’s 1965 number-one hit, “Eve of Destruction”, where he sang “You may leave here for four days in space, but when you return it’s the same old place.” While Marvin Gaye, in “Inner City Blues” sang “Rockets, moon shots. Spend it on the have-nots.”

“Sleeping Satellite” was from Tasmin Archers’ debut album, Great Expectations. She chose the album name due to her interest in Charles Dickens, and the character Pip in Dickens’ novel Great Expectations. In the novel Pip is an orphan who dreams of becoming a blacksmith. Archer also recalls, before she got a contract with EMI, “every major label turned us down” upon hearing “Sleeping Satellite”.

“Sleeping Satellite” peaked at #3 in Vancouver (BC), #6 in Minneapolis/St. Paul, and #7 in Waipahu (HI) and New York City. Internationally, “Sleeping Satellite peaked at #1 in Greece, Ireland, Israel, and the United Kingdom. It leapt to #4 in Italy and Sweden, #5 in Switzerland, #6 in France, #8 in the Netherlands, #11 in Austria, #12 in Belgium, New Zealand and Germany, and #14 in Australia.

A followup single, “In Your Care”, was a song about child abuse. It climbed to #16 on the UK singles chart. She donated proceeds from sales of the single to Childline, a counseling service for minors. In 1993 Archer won a BRIT Award for the Best British Breakthrough Act. A third single, “Lords of The New Church”, were not primarily religious, though they could be interpreted that way. Archer said the song is “about the modern breed of politicians and it was written in the very early 1990s even before things became has bad as they are now.” The single just cracked the UK singles Top 30. A fourth single from her debut album, Great Expectations, was “Arienne”. It stalled at #30 on the UK singles chart late in 1993.

In 1994 Tasmin Archer recorded a cover of the 1982 song by Elvis Costello, “Shipbuilding”, written during the Falklands War. Costello’s lyrics highlight the irony of the war bringing back prosperity to the traditional shipbuilding areas of Clydeside, Merseyside (Cammel Laird), North East England, and Belfast (Harland and Wolff), to build new ships to replace those being sunk in the war. Simultaneously, the lyrics note Britain was also sending off the sons of these shipbuilding areas to fight and, potentially, lose their lives in those same ships. Archer’s version peaked at #40 on the UK Singles chart in 1994.

In 1996, Tasmin Archer released her album Bloom. Envisioned as a non-commercial album, allowing her to explore her more artistic side, EMI gave less promotion to the album, and it was not released in North America. The debut single “One More Good Night with the Boys” failed to crack the Top 40 on the UK Singles chart. While the followup single, “Sweet Little Truth”, failed to crack the UK Singles Top 100.

In 2006 Archer released her studio album On. In an interview with Mundane Sounds, the reviewer said of On “The album is full of deeply personal songs, songs about getting older, staying true to yourself, and about keeping your head up high when things don’t go right.” A single release from the album, “Every Time I Want It (Effect Is Monotony)”, failed to chart. ”

Recalling the time between Bloom and On, Tasmin Archer has said she spent time “painting, moulding clay and dabbled a bit in Shamanic Journeying.”