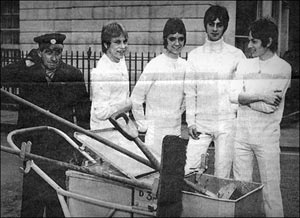 Chris Townson was born in 1947 and spent his childhood in foster care homes. The Independent reported in an obituary for Townson in 2007, that “in 1958, he was sent by London County Council to Stoatley Rough School in Haslemere, Surrey, and spent two years there.” Around 1960, Townson met Andy Ellison at a mixed Boarding School near Box Hill, Surrey.  Ellison recalls, “this was an outward bound school, that means, only lessons in the morning, and then expedition training in the afternoons and other strange activities to enhance one’s… self. Here it was that we both learnt how to be even naughtier than we already were, and it was also here one night, in our sparse dormitory, that we wrote our first song… on a banjo… titled, “Hey Little Anaconda, Won’t You Play With Me”! After their Boarding School years, Chris and Andy reconnected in Letherhead, 45 minutes southwest of London. Chris was jamming with a band that met in the basement of his art teacher’s home. Geoff McClelland was played guitar and Chris learned to play drums since they didn’t need another guitar player.

Another grad from the Box Hill Boarding School, Louis Grooner, was chosen to be lead vocalist due to his being a “show-off.” Andy Ellison added harmonica and John Hewlett, who played the bass guitar poorly, was added to the band because he was good looking. (Louis Grooner left the band in the middle of one of their performances when he suddenly chased a member of the audience, in the back of hall where they were playing, out into the street and was never heard from again). At the time the group was called The Clockwork Onions, and then The Few and then The Silence. The latter name was chosen since the band played very loud and they liked the juxtaposition of “The Silence” with the actually loud volume when they were on stage.

One night at Ashstead Peace Memorial Hall, Andy Ellison jumped into the audience and stamped on his maracas, smashing them to pieces. This minor incident caused quite a stir and so Ellison was soon diving into the audience and somersaulting back on stage at all the gigs. In 1965 The Silence had a summer gig coming up at Burford Bridge swimming pool. But the week before the gig, John Hewlett and Chris Townson, took off to the South of France. Not knowing they had left the country, Andy Ellison suddenly got a telegram from John… “We are in St Tropez… Bring all the equipment!” What Andy and Geoff didn’t know was that Chris had been arrested in Cannes, and John had gone off along the coast to seek someone he could sweet talk into putting up the bail money. Strolling in to The Voom Voom club in St. Tropez, he was spotted by the then Yardbirds manager, Simon Napier-Bell.

John persuaded Napier-Bell to pay Chris Townson’s bail money and, in a drunken moment, got him to agree to come and see John and Chris’s band, The Silence, when he returned to England. Simon Napier-Bell drove down in his Bentley Convertible to The Burford Bridge Hotel. What Napier-Bell witnessed was a shock, even to him, as he watched the singer, sing from the top board, and with the microphone in hand, plunge dangerously into the pool. The noise from the band was echoing around the North Downs. Finally, he watched in disbelief as the drummer kicked his drum kit into the pool. At the local pub, quite a few brandies later, Simon Napier-Bell declared The Silence were the worst band he had ever seen, “I’ll sign you.”

Napier-Bell renamed the band after bass player John Hewlett, who was so bad at his instrument that Napier-Bell wanted some way to make sure the others wouldn’t sack him. Napier-Bell also dressed them in clean white outfits because looking like nice clean angelic boys created great contrast with their primal wildman stage antics. Andy Ellison recalls Napier-Bell “wanted us to look angelic as we came on stage and then create absolute mayhem!” A recording deal was secured with The Yardbirds’ label Columbia. In October ’66 the band’s debut single “Smashed Blocked” was released. (It was retitled “The Love I Thought I’d Found” in its subsequent UK release). The record was actually cut by Los Angeles studio musicians. The only member of the band to appear on the single’s studio recording was Andy Ellison. In “Smashed Blocked” John’s Children explore a zone where disorientation meets near psychiatric break meets dysfunctional relationship meets communication breakdown. The one who thought he’d found love is in desperate shape. By his own description he is a) losing his mind, b) everything’s spinning, c) he has lost his way, d) he is obsessed ~ “I must have you,” e) his life is broken in two, f) his lover doesn’t notice when he cries, g) he is on the receiving end of constant criticism and being accused of lying, and h) he is blocked from being able to communicate.

Andy Ellison has said the song “was inspired by ‘The Love You Save’ by Joe Tex.” In Tex’s song, in an effort to find love, the singer explains that he’s been “misled…afraid…hit in the head…left for dead…accused…abused…refused a piece of bread…pushed around…lost and found…brutalized…” It seems that feelings of being hampered, blocked and derailed were in vogue.

Years later, Andy Ellison said to the press, “‘Smashed’ was a mod term for drunk and ‘Blocked’ was a mod term for being high on speed.” When “Smashed Blocked” spent two weeks peaking at #13 on CFUN in January 1967, they were in good company. Local Vancouver band, The Painted Ship, sang about “Frustration,” The Seeds complained in their hit “Pushing Too Hard,” while the Electric Prunes were disoriented in “I Had Too Much To Dream” and the Kinks were living on “Dead End Street“.

The band’s US label, White Whale, wanted to release a John’s Children album. Simon Napier-Bell decided it would be a great idea to overdub hysterical audience screams over the whole album to make the Americans think the band was really big in England, which he did (the screams were lifted straight out of The Beatles’ A Hard Day’s Night movie). He also decided to call the album Orgasm (to describe the “excitement” of the LP) and put a picture of a young lady quite possibly having an orgasm on the sleeve of the album. This was posted across the USA attracting advance orders of 35000 copies. The album was made to feel like a live concert and included clips of Beatles fans from A Hard Day’s Night calling out John (Lennon not John’s Children’s John Hewlett). In the end the title and the sleeve got the album banned in the States. The Daughters Of The American Revolution, an American Revolutionary War heritage organization,  complained about the title and the release was cancelled. Orgasm was eventually issued in 1970 after the band had split up. But not before being the opening act for Jimmy Cliff when he was on tour in France that year.

John’s Children and Napier-Bell eventually agreed that Geoff McClelland, whose job it was to “faint” on stage when the band ran out of songs so they had an excuse to cut the set short, didn’t really fit in with the rest of the band and he was let go. Napier-Bell was also managing a young aspiring Dylan/Donovan influenced guitarist and singer-songwriter named Marc Bolan who joined John’s Children.

In April ’67 the band went on the legendary tour of Germany supporting The Who. The band were a sensation because of their outrageous stage act which basically out-Whoed The Who. Naturally The Who and their managers weren’t very happy with that, or the fact that the Children’s Jordan amps were louder than The Who’s. Musically of course, John’s Children were no competition to The Who’s tight playing so they had to go completely over the top on stage… And they did just that at the infamous Ludwigshafen gig by the Rhine River. Marc beat his guitar with a heavy chain. Andy and John pretended to fight each other, including the use of fake blood capsules. Chris kept beating his drums maniacally, while Andy dived into the audience ripping open a pillow and spreading the feathers everywhere, making a mess of the place. The audience went wild. People tried to pick fights with John’s Children. Before long a riot began. Chairs were flying all over the place as the audience was out to lynch the bandmates. John’s Children fled from the venue, leaving all their equipment behind. As their car sped away from the venue, riot police  arrived with water cannons. The next day The Who kicked John’s Children off the tour and they went back to England. Chris Townson said of their stage act, “In the end, the sheer anarchy became quite valid. It was theatre, it was deconstruction . . . John’s Children were like an unharnessed neurotic energy with some psychopathic and mental overtones.”

Marc Bolan made his last appearance with the band on May 19, 1967 at the John’s Children’s Club. He also recorded a BBC session with them which was broadcast on June 17th. After Bolan decided, in Andy’s words, that “an acoustic guitar and a set of bongos might be a safer bet,” he put together the psychedelic-acoustic-hippie duo Tyrannosaurus Rex with percussionist Steve Peregrine Took. After three album releases, Took was replaced by Mickey Finn who became Bolan’s long time side kick. They shortened their name to T. Rex and went on to release glam rock classics in the early 70s “Get It On” and “Hot Love”.

In 1974, Townson and Ellison reunited. Together, they formed a band named Jet, with Martin Gordon and Peter Oxendale, formerly of Sparks. Then they added Davy O’List, formerly with Roxy Music. Their ad men pitched Jet as “the first glam supergroup.” Jet got a record contract with CBS. However, they never attained commercial success.

John’s Children were a major influence on the emerging punk rock scene in the UK in the 70s. They are considered the first ever glam rock band. In the 1990s, John’s Children, over two decades since they broke up in 1968, began to play on infrequently. They made touring a more regular basis starting in 2006. That year they recorded “Come On England” to coincide with the World Cup. John’s Children recorded an album titled Black & White in 2011. Andy Ellison has said of the album, it “includes new material as well as my version of ‘Sara, Crazy Child’.”