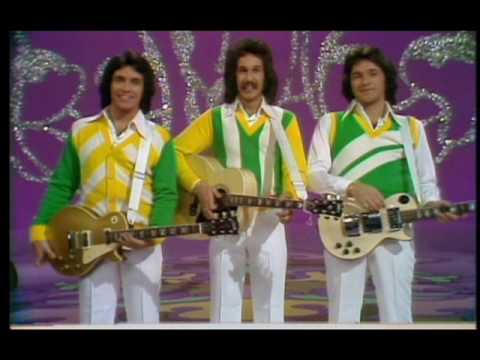 William Louis Hudson Jr. was born in 1949. Mark Jeffery Anthony Hudson was born in 1951. Brett Stuart Patrick Hudson was born in 1953. The three brothers were all born in Portland, Oregon. Their father left the family when the boys were young after he told their mother he “was going out for a pack of cigarettes.” Bill and Mark formed a band in 1963. Brett was eleven and recalls he was “too young and overweight and I wasn’t in the band.” But when Brett got sick with a virus, his older brothers decided he could join the band if he got better (they were afraid Brett was going to die). Brett got better and joined the My Sirs. In 1964 they added a guitarist named Kent Fillmore to their group. Bill also played guitar, Brett played bass guitar, and Mark played drums and keyboards. All three Hudson brothers sang vocals, with Bill as lead vocalist. After winning several local “battle of the bands”-type contest, the group recorded several songs at a local recording studio, where they received the attention of a local promoter, who offered them a contract promoting Chrysler automobiles.

As a result they got renamed the New Yorkers. They released a single titled “When I’m Gone” that was a minor hit in the Pacific Northwest in the spring of ’67. In August they released a single co-written by Bill and Mark Hudson titled “Mr. Kirby”. It climbed to #4 in Salem (OR) and #8 in Vancouver (WA). A couple more singles got little attention. The New Yorkers were one of the emerging popular bands in the Pacific Northwest, along with the Springfield Rifle. The New Yorkers followed up with “Show Me The Way To Love”, written by Bill Hudson. It was a Top 30 hit in Vancouver (WA) in early ’68. During this time the New Yorkers toured as an opening act variously for the Buffalo Springfield, the Supremes, the Who, Herman’s Hermits, Mitch Ryder & The Detroit Wheels, the Buckinghams and Johnny Nash.

On the Jerden label the New Yorkers released a sunshine pop single titled “Adrianne” which climbed into the Top 30 in the Oregon towns of Coos Bay and The Dalles in early 1969. Another single with Jerden was a commercial failure, as was “Lonely” with Warner Bros. Records. So the New Yorkers switched labels again to record with Decca Records the Harry Nilsson tune “I Guess The Lord Must Be In New York City”. In the fall of ’69, the single went Top 20 in Salem (OR) and Top 30 in Vancouver (WA). Then the New Yorker’s manager left and took all the money. Brett Hudson, recalling these events referred to this as “an age old story,” which happened to numerous recording acts.

In 1970 Decca renamed the brothers Everyday Hudson. “Love Is A Word” met with minimal success, as did several singles credited to Hudson on Lionel Records and then Playboy Records. When the Hudson Brothers were on a visit to France they got connected with Bernie Taupin and were asked to sign with Taupin and Elton John‘s Rocket Record Company label. Then in 1973 Bernie Taupin produced “If You Really Needed Me” on MCA Records, as well as “Straight Up And Tall” on the Rocket Record Company label. But neither single was a hit.

After appearing as guests on the The Sonny & Cher Comedy Hour in early 1974, a producer for CBS was impressed by the Hudson brothers’ stage presence. As a result, they were offered a chance to appear on their own variety show on CBS that summer. The Hudson Brothers Show aired Wednesday nights on CBS from July 31, 1974 to August 28, 1974. The Hudson Brothers got paid $5,000 USD per week ($26,425 in 2021 dollars). The show was so successful that CBS created The Hudson Brothers Razzle Dazzle Show. This ran for a half-hour on Saturday mornings, from September 7, 1974 to August 30, 1975. The group’s television exposure resulted in the brothers becoming teen idols. Although, the youngest – Brett Hudson – was 21-years-old.

In the fall of 1974 the Hudson Brothers released their second album Hollywood Situation on Casablanca Records. 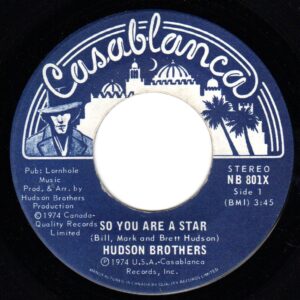 “So You Are A Star” was cowritten by Bill, Mark and Brett Hudson. The vocal and musical style resembled some of the Beatles final songs. When the song first came out, listeners on CKLG in Vancouver (BC) were invited to take part in vote in a poll. Were the Hudson Brothers a pseudonym for a reunited Beatles? Yes or No. Some hoped four years after their breakup that the Fab Four had reunited.

“So You Are A Star” is a song narrated by someone who knows a celebrity who is a star (presumably a pop star). And the narrator is intimately letting the star know that “nobody knows you like I do.” While the star “will go far,” and “play the part,” the narrator reminds the star: “you’ve got to love only me….’Cause nobody knows you, nobody shows you the way, like I do.”

Of course, when radio listeners were singing along with “So You Are A Star”, anyone could imagine themselves as “a star.” And Sly & The Family Stone had a number-one hit in the USA in 1970 titled “Everybody Is A Star”. The sentiment in that song encouraged listeners to consider this:

“Everybody is a star, I can feel it when you shine on me
I love you for who you are, not the one you feel you need to be”

However “So You Are A Star” resonated with radio listeners, there was a vibe in the air offering everyone to think of themselves as a star, at least in the eyes of someone who loved them.

The Hudson Brothers switched labels again to release “Help Wanted” on the Arista label. The single preceded the one studio album with Arista titled The Truth About Us, which was released in 1978. On August 24, 1978, the Hudson Brothers performed on The Tonight Show Starring Johnny Carson.

In 1980 the Hudson Brothers were signed with Electra Records and released a studio album and a couple of singles. But the former teen idols had been left behind by radio listeners who were now tuned into the latest hits by Blondie, Pink Floyd, Michael Jackson, Queen, Rupert Holmes, the Pretenders and Tom Petty & The Heartbreakers. That year Bill Hudson appeared on an episode of the TV series The Love Boat. Meanwhile, Bill Hudson filed for a divorce from Goldie Hawn. He married Cindy Williams, a star in the TV series Laverne & Shirley.

In 1983 the Hudson Brothers were in a comedy spoof about horror titled Hysterical. They acted alongside former Catwoman on the Batman TV series – Julie Newmar, character actor Keenan Wynn and Cindy Pickett (who played Ferris Bueller’s mother in the 1986 film Ferris Bueller’s Day Off). In 1986, Mark Hudson was the in-house bandleader on Fox’s short-lived The Late Show Starring Joan Rivers. Joan Rivers referred to the band as, “Mark Hudson, The Party Boys and The Tramp.”

Between 1988 and 2014 Brett Hudson produced and/or directed over a dozen documentaries and TV shows. This includes The Chris Montez Story in 2014.

In 1993 Mark Hudson won a Grammy Award for co-writing “Livin’ on the Edge”, recorded by Aerosmith. In 1996 interview with Entertainment Weekly, Mark Hudson said “”I’m not only surprised we survived the ’70s, I’m surprised anyone wants to revisit it.” And Brett Hudson added, ”A pink satin shirt with white platforms — would I save those clothes? I don’t think so.”

In 2006 Brett Hudson co-produced the Burt Reynolds film Cloud 9. For their work on Ringo 5.1: The Surround Sound Collection, Mark Hudson and Ringo Starr were nominated for Best Surround Sound Album in the 51st annual Grammy Awards for the year 2007–2008. It was the ninth album by Ringo Starr that Mark Hudson had produced since 1998. In 2011 Bill Hudson published a memoir titled Two Versions: The Other Side of Fame and Family.