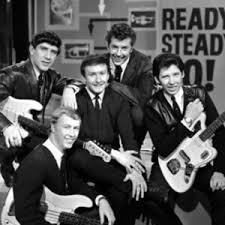 #749: Someone Someone by The Tremeloes

In 1956 at Park Modern Secondary School in Barking, Essex, two school mates, Brian Poole and Alan Blakley, started a band.  On family holidays together, they’d tell their parents about their dreams of being on TV. They learned a couple of tunes by Buddy Holly and Everly Brothers, got two acoustic Hofner guitars, and asked their saxophone and bass playing school mate, Alan Howard to join them. Once they started performing at local parties, they met drummer Dave Munden, who soon joined them. Soon Alan Blakley, Dave Munden and Brian Poole found that they could harmonise any song they wanted to and developed a style of their own, with all of them singing and playing and Alan Howard on bass guitar. At this time they did not have a name but soon opted for Tremilos after the sound on the new amplifiers which they could not yet afford. In time, the lead guitarist from Joe & The Teems, Ricky West, was added to the band in 1960.

They began touring and got a BBC spot on Saturday Club. Dave Munden, Brian Poole and Alan Blakley were also being hired on as a backing vocalists for session work by Decca Records on numerous hit records for Tommy Steele, Delbert McClinton, US Bonds, Clyde McPhatter, Jet Harris & Tony Meehan and the Vernon Girls and others.

Soon Decca signed a contract with the band in 1962 after auditioning The Tremeloes and The Beatles. Decca chose to sign The Tremeloes since they were geographically closer to Decca’s studios. By this time their name had changed from Tremilos to Tremeloes. This was after an East London newspaper had misspelled the bands name. Now billed as Brian Poole and the Tremeloes, their first UK hit was in the summer of 1963 with “Twist And Shout”, a cover of the Isley Brothers US hit the previous year. It peaked at #4 in Britain. The song was later covered by the Beatles. “Someone Someone” is a song co-written by Vi Petty, the wife of Norman Petty. The latter was the producer of Buddy Holly & The Crickets. The Norman and Vi Petty Rock & Roll Museum opened in Clovis, New Mexico, on September 6th, 2008. The Petty’s recorded and wrote songs not only for Buddy Holly, but also for Roy Orbison, Buddy Knox, Waylon Jennings and the Fireballs.

The other co-writer of the song was Edwin Greines. He co-wrote a minor hit called Mr. Success, with Frank Sinatra, in 1958. He later wrote “There’s An American Flag on the Moon”, for Jon & Robin, in 1969. The song was not a hit. Neither were any of the songs Greines wrote for Julie London, Bobby Sherman or The Five Satins.

“Someone Someone” was a B-side of a non-album single released by The Crickets in 1959. This obscure ballad became a #2 hit in England for The Tremeloes in 1964. Although it peaked at #97 in the USA, the song caught on in Vancouver and cracked the Top Ten, reaching #8. The ballad affirming that being loved by someone can make all the stars shine “for me,” resonated with many a record buyer in Vancouver. It was the first of four singles The Tremeloes would release to reach the Top Ten in Vancouver during the mid-60’s. “Someone Someone” climbed to #5 in Baltimore, #6 in Honolulu and Louisville (KY), #7 in Windsor (ON) and Indianapolis (IN).

Then the Tremeloes began to slide off the radar as other recording artists were increasingly singer-songwriters like Lennon-McCartney of The Beatles. In 1965 and 1966 the Tremeloes failed to excite as other British Invasion recording acts, as well as those from the USA, elsewhere in Europe, Australia – and a few in Canada, gained in popularity.

However, the Tremeloes were the first to appear on the British pop music variety show Ready Steady Go. They were also the first British band to tour both Australia and Ireland.

During this time Chip Hawkes joined The Tremeloes in 1965 and replaced Alan Howard. Hawkes started his professional music career in 1962 with a band called The Horizons. The band featured Chip on bass & Rod Evans on vocals. Evans later became the original lead singer for Deep Purple.

Chip & Alan Blakely found the song “Here Comes My Baby” written by Cat Stevens, which proved to be their first international hit. It went to # 13 on the Billboard Hot 100 in the USA, #4 in the UK and #1 in Vancouver for two weeks in May 1967. Their next single was a cover of the Four Seasons’ hit, “Silence Is Golden”. The Tremeloes version climbed to #1 in the UK  in May 1967, and #1 in Vancouver in September ’67. It peaked at #11 on the Billboard Hot 100. in  The Tremeloes also recorded an Italian version, “E in silenzio”. During this time Brian Poole was attempting a solo career and he officially left the band in 1968. Over the years Poole has been the lead singer in a band called Electrix.

In 2016 former Tremeloes bandmates, Rick Westwood and Chip Hawkes were accused by a fan of indecent assault. The alleged indecent happened to a fan, then 15 years old, in 1968, at a hotel after a concert. However, in July 2016, the BBC reported the crown prosecutor, Edward Owens, told a judge the crown had no evidence to offer in support of the allegation. The case took two years and seven months before it went before a judge. Regarding news of the allegations, Chip Hawkes told the BBC the case had badly damaged his career. Hawkes revealed a member of the general public had attacked him prior to a previous court appearance.

In 2018, it seems there is a dispute with the management of the Tremeloes with Brian Poole. On Pooles website he wrote:  “As at today date, 13 February, Brian is still advertised as appearing at Dorking Halls, Dorking on the 17 March 2018. This is to confirm that Brian Poole will not be appearing with the Tremeloes at this theatre. This is through no fault of his own but due to a decision by their ex-Management.”