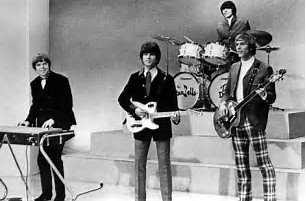 “Best known for their hit ‘Dirty Water,’ The Standells released a string of snotty, aggressive garage singles in the mid to late 1960s which are now rightly regarded as proto-punk classics. ‘Sometimes Good Guys Don’t Wear White,’ ‘Why Pick On Me,’ ‘Riot On Sunset Strip’ ~ the songs of The Standells have been covered by everyone from Bruce Springsteen, Aerosmith and U2 to Spacemen 3, Minor Threat and a million punk bands as well as many subsequent scene bands. ”

Larry Tamblyn was born in 1943 and while he was still 16 years old had a recording contract and a single titled “Patty Ann” on the Top 40 in LA and San Bernardino. He released three singles in 1960-61, including a doo-wop ballad called “This Is The Night“. Tamblyn met Tony Valentino and the two decided to form a doo-wop group.

The group was formed in 1962 in Los Angeles by keyboardist and lead vocalist Larry Tamblyn and guitarist Tony Valentino. Larry created the name from “Standing” around booking agencies trying to get work. Originally the group was called the “Standels,” with only one “l”. However, in 1963 the spelling was changed to “Standells.”  The name was also lengthened for awhile to Larry Tamblyn and the Standells, as noted in the Vernon Joynson book Fuzz Acid & Flowers. Their first recording, “You’ll be Mine Someday”/”Girl in My Heart”, was standard doo-wop. It was recorded in 1963 and released in 1964 on Faro Records. Later that year, their name was shortened to “Standells.” The Standells are considered by many to be the godfathers of punk rock.

In 1963 The Standells appeared in the Connie Francis movie Follow the Boys, where they played background music at party scenes. The brother of Standells lead vocalist and drummer, Larry Tamblyn, was Russ Tamblyn. Both brothers had roles in the film. The older brother, Russ, played the role of Riff, the leader of the Jets gang in the 1961 movie musical version of West Side Story.

The Standells were signed by Liberty Records and issued an album, The Standells In Person At P.J.’s, in 1964 (later re-released as The Standells Live and out of Sight). After having no success with Liberty they signed with Vee Jay in 1965 for two singles, one of which was produced by Sonny Bono of Sonny & Cher. Cher did backup vocals on one of their songs called “The Boy Next Door”.

On March 18, 1965, The Standells guest starred as themselves in an episode of the The Munsters, “Far Out Munster.” In the episode they performed “Come On and Ringo” and a cover of The Beatles hit, “I Want to Hold Your Hand”. That same year The Standells appeared in the movie, Get Yourself a College Girl. This beach party movie featured other artists including The Animals, Nancy Sinatra, The Dave Clark Five, Donnie Brooks and Stan Getz. In the movie The Standells performed cover versions of “The Swim” and “Bonnie Maronie.”

The group began 1965 with a January 18 appearance in The Bing Crosby Show episode “Bugged By the Love Bugs”, playing the fictional band, the “Love Bugs”. They appeared as a nightclub band in the “Three L’il Lambs” episode of Ben Casey on March 29, 1965. They also sang the title song for the children’s movie, Zebra in the Kitchen.

The Standells had quite a few changes in their lineup, while Tamblyn and Valentino remained as core bandmates. Joseph Richard “Dick” Dodd, Jr., who was in the Mickey Mouse Club at the age of nine in 1955,  and a dancer in the 1963 film, Bye Bye Birdie, became the Standells drummer and lead vocalist. In July of 1966 their first hit single on Tower Records, “Dirty Water”, reached #11 on the Billboard charts. In Vancouver the single missed the Top 20, stalling at #22. Dick Dodd sang lead vocals with the memorable refrain, “ah, Boston, you’re my home.” Despite the references to Boston and the Charles River in “Dirty Water,” The Standells are not from Massachusetts. Nevertheless, “Dirty Water” is still played after every home victory won by the Boston Red Sox, Boston Celtics, and Boston Bruins as well as at Northeastern Huskies’ hockey games. One would be hard-put to find either a sports fan or rock music lover in Massachusetts who’d never heard of the Standells. The Standells also appeared on TV shows like Shindig!, American Bandstand and Where the Action Is on due to the popularity of “Dirty Water.”

The other bandmate at this time in the group was bass player Gary Lane. The Standells follow-up hit was “Sometimes Good Guys Don’t Wear White”. The song made it to #43 on the Billboard Hot 100, but climbed into the Top Ten in Vancouver, peaking at #7 on CFUN. “Sometimes Good Guys Don’t Wear White” is a song concerning a working class guy asserting he’s as good as anyone else a female might choose to date. He’s got long hair, is a “poor boy born in the rubble,” a hard worker and offers real love. It seems the person he’s trying to go steady with has parents who are concerned he isn’t from the right side of the tracks. Maybe they, and the female he’s interested in, would prefer that she go out with a “crew-cut baby,” someone who has a conservative appearance that included a white collared shirt. The issue of class is woven though-out the song. His baby may prefer guys in white shirts with crew-cuts. If you had a disposable income like those “rich kids and all that lazy money,” you might afford to get yourself some “white pills.”

In 1966 in Southern California, “white pills” were likely quaaludes or a variant of speed. Quaaludes promoted relaxation, sleepiness and sometimes a feeling of euphoria. It causes a drop in blood pressure and slows the pulse rate. By 1972 quaaludes were one of the most prescribed sedatives in the USA. But the side effect of euphoria was a catalyst for recreational drug use. However, people began to “lude out” as paramedics discovered that people who had overdosed on quaaludes could have seizures, a coma or die as result of their useage. This kind of “easy living,” according to the narrator of the song, can’t hold a candle to the love and the life he’s offering. Even though some of his friends “have been in real trouble,” it’s likely this is more like brawling than drug use. It may be that some people think a white collar worker is better than a guy working in a ditch. But the singer argues “who’s to say who’s the better man?” A decision to go steady with someone because of how much money they’re worth or how long their hair is are superficial choices. The singer tells his “baby,” if that’s how she thinks then “flake off.”

The Standells began 1967 with a single that was the theme song from Riot on Sunset Strip. This was a 1967 low-budget counter-culture era movie filmed and released within six weeks of the actual late-1966 Sunset Strip Curfew Riots. The film attempted to capture the essence of the period around the Sunset Strip riot, and also added a subplot concerning a young girl’s troubled relationship with her divorced parents. Her dosage with LSD by a would-be seductor, the subsequent ‘acid trip’ she experiences, and her later discovery by a police sergeant as the victim of gang rape, were among the movie’s peak moments. The Standells performed their non-charting single, “Riot On Sunset Strip”, written for the film.

In 1967 they were featured on Art Linkletter’s House Party, debating moral majority broadcasting mogal Gordon McLendon who banned their recording “Try It”. McLendon deemed the songs lyrics to be obscene.

Dick Dodd left The Standells in 1968. He had a minor hit called “Little Sister” that went Top Five in Orlando, Florida, in 1968. He drove limousines for awhile and then went on to lead the Dodd Squad, a high-spirited oldies band that appeared at a Los Angeles club called the Hop, and elsewhere from the early 80’s into the 90’s. He died in 2013. Standells Bandmate Gary Lane died in 2014.

Dodd, Tamblyn and Valentino, along with session musicians, appeared in numerous reunions throughout 80’s, 90’s and into the 2000’s. Gary Lane re-joined the band in 1999. The Standells appeared at Game 2 of the 2004 World Series as well as the first game of the 2007 American League Division Series at Fenway Park in Boston where they sang the national anthem. Since the early 1990s “Dirty Water” has been the Red Sox unofficial anthem. More recently US performances include the Cannery Casino amphitheater in Las Vegas, the Hollywood landmark Amoeba Music, the EchoPlex, and the featured performers at the June Lake Loop Mountain Music Festival. John Fleck, who joined the band in 1967 after Gary Lane left, has rejoined the band for their more recent activity in the past two decades.

In 2010, The Standells six–nation European tour included performances in Madrid, Bordeaux, Rennes, Paris, London, Oslo, Berlin, Athens, and Frankfurt. They performed at Festival Beat in Parma, Italy, in August 2014, along with numerous concert dates that year in the USA. In the summer of 2015 The Standells put together “The Dirty Water Tour”. It also included Mitch Ryder & the Detroit Wheels (“Devil With a Blue Dress”) Gary DeCarlo of Steam (“Na Na Hey Hey Kiss Him Goodbye”) Jimy Sohns of the Shadows of Knight (“Gloria”) and Johnny Echols of Love (“7 and 7 Is”).

Tony Valentino owned Bellisimo’s, an Italian restaurant on Ventura Boulevard in Woodland Hills, California, that had closed by 2010. According to their website in August 2017, The Standells have no current upcoming concerts.