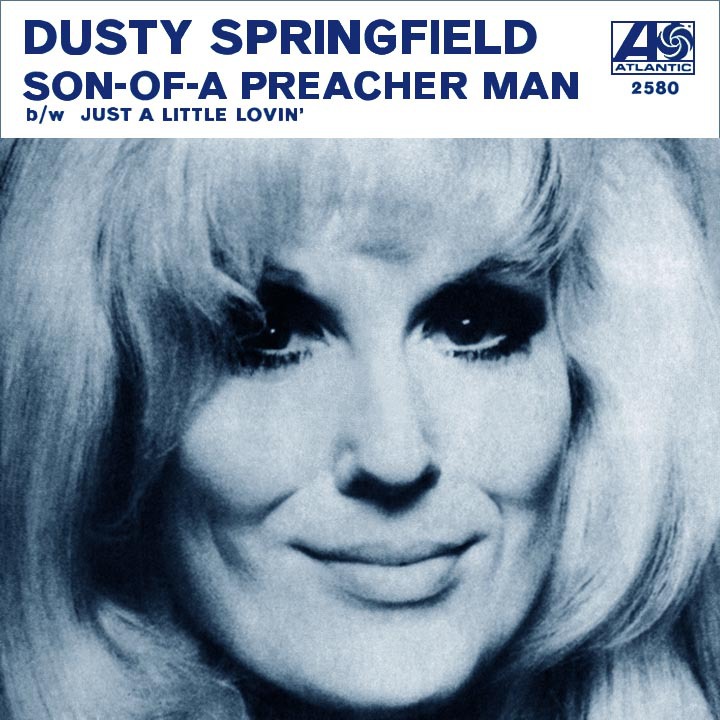 #107: Son Of A Preacher Man by Dusty Springfield

Mary Isobel Catherine Bernadette O’Brien was born in West Hampstead in north London, in 1939. Along with her oldest brother, Dion, she recorded her first tape of a song they sang while still children. Her dad was an unhappy accountant who dreamed of becoming a concert pianist, but never became one. While Mary’s mother, according to the Karen Bartlett autobiography, Dusty: An Intimate Portrait, “was continuously drunk and sat all day in cinemas.”As she grew up, Mary went to school at a Roman Catholic Convent. At the age of 18 she became a member of a female group named the Lana Sisters. The group sang backup to pop singer Al Saxton who had several Top 30 hits in the late 50’s in the UK, including a cover of Sam Cooke’s “Only Sixteen” and “You’re The Top Cha.” While Saxton enjoyed his moments of fame, Mary teamed up with her brother, Dion, and a friend of theirs named Tim Field. By the end of 1959 she had taken the stage name of Dusty Springfield. The trio, now known as The Springfields, got a record deal with Philips Records in 1961.

In 1962 The Springfields had an international hit with “Silver Threads And Golden Needles,” which climbed ti #1 in Australia and went Top 20 in the USA. The song climbed to #3 in Toronto, #4 in Winnipeg, #14 in Montreal and #17 in Vancouver. Canadian Radio listeners liked the sound of that female voice they were hearing on the single and wanted to hear more. The Springfields were the first British group to have such success, predating The Beatles. In 1963 Dusty released her first solo single, “I Only Want to Be With You.”

Dusty Springfield had a series of hit records including the Burt Bacharach tune, “Wishin’ and Hopin’” in 1964, her follow-up to “Stay Awhile.” In 1964, she also charted “I Just Don’t Know What to Do with Myself” to #3 in the UK and New Zealand, and #5 in both Ireland and the Netherlands. More Top Ten hits in the UK cracked the Top 40 in Vancouver: “Losing You” and “In The Middle Of Nowhere”.

In January, 1965, Dusty in San Remo, Italy, was an entrant in Italian Song Festival where she reached the semi-final. At the festival she heard Pino Donaggio perform a song titled “Io Che Non Vivo (Senza Te).” Its English version, “You Don’t Have to Say You Love Me” was sung by American country singer, Jody Miller. Dusty fell in love with the song and recorded it. Her version became a #1 hit in the UK in the spring of 1966 and on the June 19, 1966, the top of the CKLG pop chart in Vancouver.

Dusty Springfield was a booster of American R&B music and her covers of soul singers across the Atlantic introduced the record buyers in the British Isles to people like Aretha Franklin and Gladys Knight. On one of her singles she was backed by Doris Troy of “Just One Look” fame. A forerunner of the Northern Soul genre, Dusty Springfield’s covers of soul music was an ear-catching fusion and record-buyers rewarded her with her album, Dusty in Memphis, and others. After that her album, The Look of Love, the title track was featured in the 1967 spoof film of James Bond titled Casino Royale. The film starred David Niven, Peter Sellers, Ursula Andress, Orson Welles and Woody Allen. A second single from the album was “What’s it Gonna Be”.

From March 21 to 30, 1968, Dusty Springfield appeared for ten consecutive nights in concert at Isy’s Supper Club – 1136 West Georgia – in Vancouver. 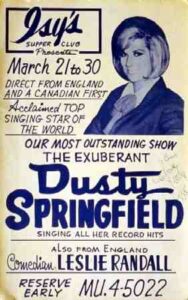 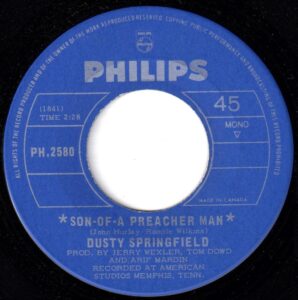 “Son Of A Preacher Man” was written by John Hurley and Ronnie Wilkins. Hurley was born in Pittsburgh in 1941 and Wilkins was born in North Carolina the same year. Wilkins was a teenager when he was discovered by a Charlotte talent agent who heard him perform on Lumberton radio station WAGR. Wilkins wrote “Poor Little Cupid” for Joe “Wooden Heart” Dowell, a non-charting single in 1963. Hurley and Wilkins wrote “Spread It On Thick” for the Gentrys in 1966. Wilkins went on to tour with Loggins and Messina, and became a member of Roger Miller’s backing band. Hurley released three solo albums in the 1970s there were not commercially successful. He died at the age of 45 in 1986 of liver failure and a brain hemorrhage.

“Son Of A Preacher Man” was first recorded by Aretha Franklin. But it was not released. So the song was offered to Dusty Springfield. “Son Of A Preacher Man” is about a preacher’s son named Billy-Ray. He comes along with his preacher father to a home where there’s a girl about his age. When the adults gathered around and started talking about religion, Billy-Ray and the girl would go out through the backyard and go for a walk. Lots of staring into one another’s eyes, led to kissing. And that leads to more and more nights to go walking: “Can I get away again tonight?” They develop a solid bond, and in time they look to “see how much we’ve grown.” It seems the two get hitched. As the woman looks back, she declares “the only one who could ever teach me was the son of a preacher man.” He was the only one who could “move” her, “reach” her or “groove” her.

In 2020, the album was selected by the Library of Congress for preservation in the National Recording Registry for being “culturally, historically, or aesthetically significant.” In its official press release, the library stated that despite its modest sales when first released, “over time, Dusty in Memphis grew in stature to become widely recognized as an important album by a woman in the rock era.”

In the spring of 1969, Dusty Springfield had a Top Ten hit in Vancouver with “The Windmills Of Your Mind”. Other Top 30 hits in Vancouver in ’69 for Dusty were “A Brand New Me” and “Willie & Laura Mae Jones”.

Her personal life was challenged by living in a pre-Gay liberation era. Her exploration of lesbian relationships made her one newspaper headline away from having her career disintegrate. She had relationships with numbers of women including fellow recording artists Norma Tanega (1966-73) and Carole Pope (1981). Springfield also had addictions to alcohol and drugs and was sent to a psychiatric ward on at least one occasion. Referred to as a “bachelor woman” by some in the press, Dusty Springfield told the press in 1970 she didn’t care about who slept with who. “People are people” she said. Dusty Springfield died in 1999 after several years suffering with breast cancer. She was 59 years of age.

4 responses to “Son Of A Preacher Man by Dusty Springfield”