#1416: Souvenir by Orchestral Manoeuvres In The Dark

Orchestral Manoeuvres in the Dark (OMD) is a band that formed in 1978 in the Liverpool suburb of Wirral, UK. The bands’ co-founder, George Andrew “Andy” McCluskey, was born in 1959 in the town of Heswall on The Wirral peninsula. In primary school McCluskey met Paul Humphreys. The two teamed up in their teens to play in the bands Hitlerz Underpantz, VCL XI and the Id. The latter was a synth-pop band that also included future OMD member Malcolm Holmes. Paul David Humphreys was born in 1960 Merseyside. He was influenced by Kraftwerk and Brian Eno.  Malcolm Holmes was born in a suburb of Merseyside in The Wirral in 1960. When the Id was founded in 1977, Holmes became the band’s drummer. He joined OMD in 1980. Martin Cooper was born in 1958 and joined OMD in 1980.

In 1980 the band released their self-titled debut album Orchestral Manoeuvres in the Dark. They released four singles from the album, with the fourth – “Messages” – charting highest on the UK singles chart at #13.

In 1980 Orchestral Manoeuvres In The Dark released an anti-war song titled “Enola Gay”. The song was named after the bomber that dropped the atomic bomb on Hiroshima on August 6, 1945. “Enola Gay” became a Top Ten hit in Ottawa (ON), peaking at #9 in May 1981. Internationally, “Enola Gay” peaked at number-one in Italy and Spain, #2 in Switzerland, #6 in France and #8 in the UK. It was the only single release from the band’s second album, Organisation.

Their next single release was “Joan Of Arc“, from their album Architecture & Morality. It was inspired by the historical figure who lived from 1412 to 1431 and was burned at the stake at the age of 19. In the spring of 1982 “Joan Of Arc” peaked at #5 in Toronto, #7 in Winnipeg (MB), and #15 in Vancouver (BC) and Halifax (NS). Internationally, the single peaked at #5 on the UK singles chart.

Vancouver radio listeners had to turn the dial to Top 40 radio on CFMI where OMD’s “Souvenir” climbed into the Top Ten in June 1982. 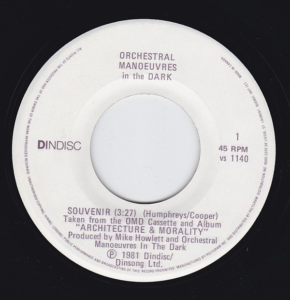 “Souvenir” was cowritten by Humphreys and Cooper. In the opening verse the narrator confides “It’s my direction, it’s my proposal…it’s leading me astray.” That something is “my obsession,” and he admits “it’s my creation.” In an emotional twist, he downplays his obsession, saying “it’s not important now.”

The original 3rd and 4th verses were edited out of the 45 RPM version of the song. However, they appeared on the album track and in extended versions:

The conversation
the combination
I tell the truth
my feelings still remain.

His “obsession” is his own creation, and it is born of his imagination.

In the music video Andy McCluskey spends the entire video driving around in a classic red, convertible Volkswagen Karmann Ghia (1955-1974) on the 400 acre grounds of Stowe House in picturesque Buckinghamshire. 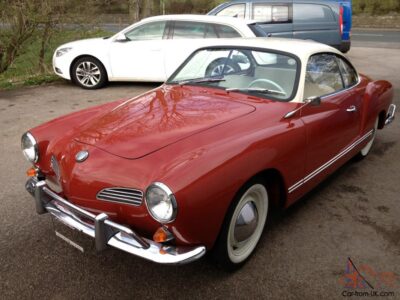 The 916-foot wide heritage home, Stowe House, was built around 1683 and is a showpiece of neoclassical architecture in Britain.

While McCluskey drives around in the convertible, Paul Humphreys stands on the Palladian Bridge while singing and leaning against the pillars of the bridge. 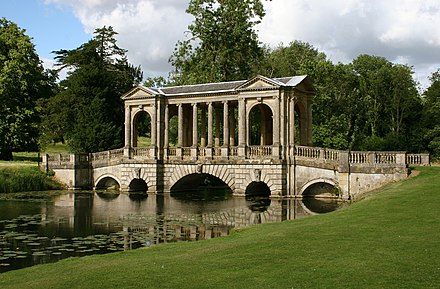 In “Souvenir”, obsession is taking over his life: “It’s my creation.” He doesn’t know what the end result of this obsession will be: “I can’t imagine my destination,” but he makes no apology for it. Based on the music video, the obsession in “Souvenir” could be classic sports cars, property, luxury, architecture, history, landscaping and/or being in nature. In life, people can get obsessed with work, sex, murder, money, power, art, politics, religion, many things. While there can be societal judgments about someone being “obsessed,” in the song the narrator is not concerned, he’s just being candid about his preoccupation.

Though the singer tells us his obsession is “not important now,” the title of the song suggests otherwise. A souvenir is a word that comes from the French language meaning “a remembrance or memory.” As a  memento, keepsake, or token of remembrance, a souvenir is an object a person acquires for the memories the owner associates with it. Consequently, whatever the obsession is actually does represent something close to the heart, something that is important after all.

Sometimes when something is close to someone’s heart, they will downplay its importance in their conversation with others. It is a way of defending oneself from anyone who might be critical of their souvenir, their obsession. When we are the first to downplay the importance of something that is dear to us, others who might have voiced criticism will have less impact, since we’ve already been the first to minimize things.

Current lack of availability of most of the CFMI charts in Vancouver for 1982 prevents the chart-run history of “Souvenir” on the radio station from being used to calculate the songs position within this website’s Countdown. However, “Souvenir” is one of three songs reviewed here as a bonus single.

Internationally, “Souvenir” climbed to number-one in Portugal and Spain, #3 in the UK, and #9 in Ireland. Both “Joan of Arc” and “Souvenir” were singles from OMD’s album Architecture & Morality.

Back in the UK, OMD released a followup Joan of Arc-themed single titled “Maid Or Orleans (The Waltz of Joan of Arc)”. The single became a number-one hit in Germany, Belgium, the Netherlands and Spain. Elsewhere it climbed to #2 in Austria, #4 in Switzerland and the UK, #5 in Ireland, and #7 in New Zealand.

In 1983 the debut single from OMD’s album Dazzle Ships titled “Genetic Engineering” peaked in the Top Ten Alternative Radio charts in both Edmonton (AB) and Montreal. In 1984 OMD released Junk Culture. The debut single titled “Locomotion” was a song with different lyrics than the Little Eva hit from 1962. “Locomotion” climbed to #4 in Ireland, and #5 in the Netherlands and the UK in 1984. It also climbed into the Top 30 in Montreal on AM-Top 40 radio. A second single from Junk Culture titled “Talking Loud And Clear” peaked at #11 in the UK. But it failed to get much airplay in North America.

The band next released an album titled Crush with the lead single “So In Love”. In Vancouver (BC) the single climbed to #8 in late November 1985. The single made the Top Ten on the Alternative Radio charts in Edmonton (AB) and Calgary (AB). It was the first single to chart on the Billboard Hot 100, climbing to #26. This was aided by its number-one peak in San Francisco, The followup single, “Secret”, peaked at #6 in Hamilton (ON) though it stalled at #63 on the Billboard Hot 100. In support of Crush, OMD went on another tour which included a concert at the Pacific Coliseum in Vancouver on July 31, 1985. They returned months later as an opening act for the Thompson Twins at the same concert venue on November 14, 1985.

In 1986 OMD’s song “If You Leave” was featured in the teen romance Pretty In Pink. The exposure gave the band their first Top Ten hit in the USA, peaking at #4 on the Billboard Hot 100 and #2 in Vancouver (BC). Also that year, OMD released the studio album Pacific Age. The lead single “(Forever) Live And Die” climbed to #1 in Vancouver (BC) and #19 on the Billboard Hot 100.

In 1988 OMD released a new single titled “Dreaming” on The Best of OMD. On May 4, 1988, OMD appeared in concert again at the Pacific Coliseum in Vancouver as the opening act for Depeche Mode.

McCluskey split from the band in 1989, taking with him rights to OMD. This left Humphreys, Holmes and Cooper to find a new record label and form a new group they named The Listening Pool. In 1991 Andy McCluskey, with a new musicians released OMD’s eighth studio album, Sugar Tax. The lead single, “Sailing On The Seven Seas”, peaked at #3 in Austria, the UK and Sweden, #5 in Ireland and #9 in Germany. The followup single from the album, “Pandora’s Box”, peaked at #7 in Austria, Sweden and the UK late in 1991.

In the 1980s and 90s OMD managed to chart four singles into the Top Ten on the Billboard Dance Club Songs chart. The last of these singles was “Stand Above Me” which climbed to #6 on the chart in 1993. It was the lead single from Liberator their ninth studio album. Their last Top 20 hit in the UK was in 1996 with “Walking On The Milky Way”. Disillusioned with the prevalence of BritPop in the mid-90s, Andy McCluskey disbanded OMD in 1996.

In 1996 Paul Humphreys began to collaborate with Claudia Brücken, the former lead singer of the German synth-pop band Propaganda. They wrote songs and performed in concert until 2013. In 1998 Andy McCuskey founded a girl group called Atomic Kitten, co-writing their number-one 2001 UK hit single “Whole Again”. In addition he co-wrote four of their other Top Ten hits that appeared on the UK singles chart between 1999 and 2005.

In 2006 McCluskey, Humphreys and Holmes reunited. In 2007 Martin Cooper rejoined OMD. The band has continued to tour and in 2011 released the album History of Modern. The past decade the band has appeared in concert in Vancouver at the Commodore Ballroom on September 30, 2011, and on April 5, 2013.

OMD has continued to record over the decades with their 13th studio album, The Punishment Of Luxury, released in 2017. Touring with their album, the band performed at the Commodore Ballroom in Vancouver (BC) on March 23, 2018. Since 2015 Stuart Kershaw has been the OMD’s drummer.