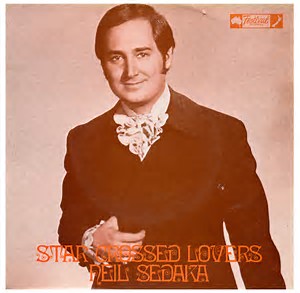 At Abraham Lincoln High School Sedaka began playing rock n’ roll in addition to his classical studies. He created a doo-wop group called The Tokens, who had a number one hit in 1961 called “The Lion Sleeps Tonight“. When he was 13 a neighbor heard Sedaka playing and suggested that he meet another teen with a musical ear down the street named Howard Greenfield. The two formed a songwriting partnership and between 1959-1963 achieved record sales of over 40 million. Next, Sedaka and Greenfield got contracts as songwriters with Don Kirshner and Al Nevins of Aldon Music. Aldon Music was one of the independent music companies in the Brill Building in Manhattan. Other singer-songwriters in the Aldon Music stable included Neil Diamond, Carole King, and Paul Simon. In the Brill Building a musician could find a publisher and printer, cut a demo, promote the record and cut a deal with radio promoters. Offering these services all inside one building was an advantage over other music companies where a recording artist had to go to multiple addresses to get these tasks completed. The Brill Building at 1619 Broadway, and the nearby 1650 Broadway building, (and to a lesser degree 1697 Broadway) grew to define the “Brill Building Sound” whose creative artists dominated the pop charts with their output, especially prior to the British Invasion.

At the age of 19, Sedaka had a Top 20 hit recorded by Connie Francis in 1958 called “Stupid Cupid”. She later recored the theme song for the theme song for the movie Where the Boys Are. Sedaka began releasing singles as a solo recording artist after he signed with RCA Victor. He was successful in the USA, but often even more successful on the charts in Vancouver. “Stairway To Heaven” peaked at #9 on the Billboard Hot 100 and #1 in Vancouver. Other examples are “Happy Birthday Sweet Sixteen” which peaked at #1 in Vancouver and #6 on the Billboard charts in the fall of 1961. Earlier that year Sedaka had a string of number one hits in Vancouver with “Calendar Girl” (#4 on the Billboard Hot 100) and “Little Devil” (#11 on the Hot 100). Sedaka’s recordings were set apart due to the unique multi-tracking of his own voice. However, his star began to fade into 1963 as his single released failed to crack to Top 20.

In 1964, with the arrival of the Beatles, The Rolling Stones, The Dave Clark Five, Herman’s Hermits, Petula Clark and other acts that were part of the British Invasion, Sedaka got crowded out of most AM radio playlists. He turned to songwriting over much of the next decade, including “Workin’ On A Groovy Thing”, a Top 20 hit for the Fifth Dimension in 1969. Earlier that year Neil Sedaka had a #1 hit in Australia that didn’t crack the Billboard Hot 100 back in his native USA. It became the #5 song of the year in Australia for 1969. The song, “Star Crossed Lovers”, also climbed into the Top Ten in Vancouver and made it to #8.

Can people of two different religious background find love and happiness together? The question underlines the lyrics in Neil Sedaka’s “Star Crossed Lovers”. Back in 1969 the possibilities of persons of different faith upbringings could be a Protestant Christian (Methodist, Baptist or Episcopalian for example) wanting to marry a Roman Catholic or someone from the Eastern rites (such as Greek Orthodox). It much fewer instances, there were also romances between a Christian and a Jew, a Buddhist and a Hindu, a Muslim and a Jew etc. But in Australia, where the song was most popular, the likely threshold to cross would have been between a Protestant Christian and a Roman Catholic Christian. When people are raised in households where devotional practices and attendance at a house of worship is expected, there can be many obstacles to dating a person from a different denomination or faith background. Even when Christians sing the spiritual, “He’s Got The Whole World In His Hands”, it doesn’t mean that there is going to be an instant level of comfort with people who are seen as different.

In 2016, a column in The Guardian by Mariella Frostrup titled “I Love My Boyfriend But We’re Different Religions. Will That Matter When We Wed?,” she discusses a dilemma posed by a Muslim woman who writes to her from within the UK:  I am a 30-year-old woman of Indian ethnicity. I am a doctor and living alone, away from my family. Two years ago I met a wonderful man and we now feel it’s time to tie the knot. I have never been particularly religious, but my family is Muslim – though quite liberal. My parents have yet to meet my boyfriend, but I am sure they will love him. My problem is that in Islam a Muslim woman cannot marry a non-Muslim man – any marriage which takes place is invalid. My boyfriend is Christian and 100% sure he does not want to convert. I fully respect his decision, but it means that we could only marry legally and not religiously. This is bugging me, as I strongly feel I would like a religious wedding blessed by God – or at least the God I understand there to be. I feel like a fanatic for having these thoughts, as I don’t do anything that a Muslim woman is expected to do. Should I ignore my conscience and marry him legally, or is this a sign to break up?

Columnist Frostrup replies: “You say you “don’t do anything a Muslim woman is expected to do”, so you’re not obvious marriage material for a committed Muslim man, which is what you’re suggesting as an alternative…. Ultimately you’re the only one who can decide how much your inherited religion matters to your future life. Judging by how you’ve lived to date, I suspect the embrace of your family and the virtues of the man himself should and will be what you base your conscious choice on.”

Like the character in Neil Sedaka’s “Star Crossed Lovers” who has gone to a confession, the decision about pursuing a relationship with someone who is “not one of our kind” and who “won’t believe in the things we believe in,“ is finally up to the person faced with the choice. Saying yes or no to a life together with someone you love, who you know has a different religious background does not need to be a deal breaker, unless it is a deal breaker. The feelings one has about the person they are “in love with” may tip the balance toward saying yes, despite the objections of ones religious peers and family.

After a decade of relative obscurity on the pop charts, Elton John approached Neil Sedaka to record a duet with him called “Bad Blood”, and encouraged him to record a new album titled Sedaka’s Back. The album featured his #1 hit in early 1975, “Laughter In The Rain”. While “Bad Blood” topped the pop charts in October 1975. Building on his mid-70’s revival, Sedaka re-released hit #1 hit from 1962, “Breaking Up Is Hard To Do”, this time as a ballad. It became the first song in music history to reach #1 on the charts in Canada having been recorded in two different versions by the same artist to reach the top spot. (The original peaked at #1 in the USA and the slow version in ’75 climbed to #8 on the Billboard Hot 100). During this time, Sedaka also helped to launch the career of the Captain and Tennille with their version of his “Love Will Keep Us Together”, which won a Grammy Award for Record of the Year for this worldwide top charting hit.

On January 18, 1978, Neil Sedaka received a star on the Hollywood Walk of Fame. Though Elton John helped resurrect his career, Sedaka went with a different record label and it soured their friendship.
In 1980 he released a duet with his daughter Dara which made the Top 30 in the USA. After 1980 Neil Sedaka released just nine singles into the 1990s.

In 2017 Neil Sedaka continues to tour in his 78th year with concert dates scheduled in the UK and USA into September 2018, according to his official website. Though, in an interview in 2017 Sedaka reported he’d had a fall in early June. It left him with a broken shoulder and rib. The Daily Mail reported “With his arm in a sling, he’s not so much laughing in the rain as grinning through the pain. ‘This is probably my last UK tour,’ he says. ‘I still love the songs, but the travelling is difficult.’”

August 3, 2017
Mariella Frostrup, “I Love My Boyfriend But We’re Different Religions. Will That Matter When We Wed?,” Guardian, November 16, 2014.
Neil Sedaka Biography, Neil Sedaka.com
Adi Gold, “Neil Sedaka: Israel is the Homeland: Pop music icon promises to be ‘bigger than Paul Anka’ in Tel Aviv concert. ‘After all, I’m One of Yours’,” Ynetnews.com, Rishon Lezion, Israel, October 3, 2010.
“Monday in Broadcast History .. January the 18th…,” Puget Sound Radio.com, January 17, 2021.
Graeme Thomson, “Elton John loved his songs so much that he rescued him from the recording wilderness. So why did Neil Sedaka, creator of Oh! Carol and Breaking Up Is Hard To Do, turn his back on his friend?,” Daily Mail, UK, June 10, 2017.
“Boss 30,” CKLG 730 AM, Vancouver, BC, January 31, 1969.

One response to “Star Crossed Lovers by Neil Sedaka”