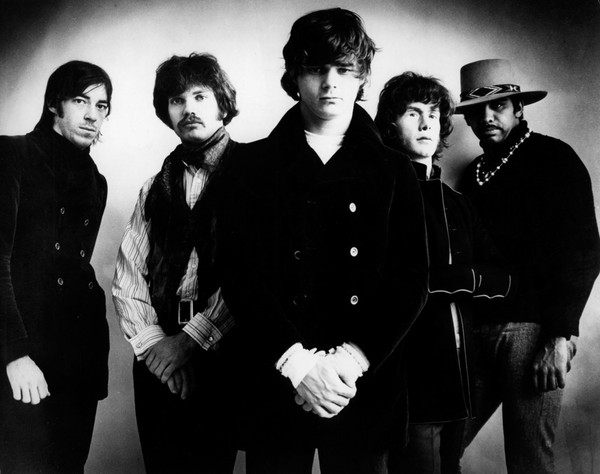 Steven Haworth Miller was born in Milwaukee, Wisconsin, in 1943. His parents were jazz enthusiasts, and were also good friends with Les Paul and Mary Ford, after the singing duo moved to Milwaukee in 1949. When his family moved to Dallas in the summer of 1950, Steve got to hear bluesman T-Bone Walker and jazz great Charlie Mingus. In 1955 Miller formed a band called the Marksmen, which included a young Boz Scaggs. He kept up his interest in music out of high school, forming the Ardells in 1961, while at college back in Wisconsin.

But in 1973, Steve Miller shifted to a more pop-rock sound. The Steve Miller Band single, “The Joker”, became a number-one hit on the Billboard Hot 100 in early 1974. The song gave a nod to several of Miller’s persona: “Gangster of Love,” “Space Cowboy,” and “Maurice.” “The Joker” also topped the pop charts in Ireland, the Netherlands and New Zealand. In Vancouver, “The Joker” stalled at #4, kept out of the number-one spot by local chart-toppers Terry Jacks’ “Seasons In The Sun”, Jim Stafford’s “Spiders & Snakes”, and Ringo Starr’s “You’re Sixteen” which spent four weeks at #3.

Local Vancouver fans flocked to hear the Steve Miller Band perform at the Pacific Coliseum on May 31, 1974.

In 1977, the Steve Miller Band released the album Book of Dreams. The debut single, “Jet Airliner”, was a #2 hit in Vancouver, and #8 on the Billboard Hot 100 in June 1977. Another release from the album was “Swingtown”. 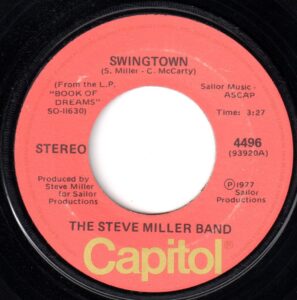 Miller told People magazine regarding the composition of “Swingtown”, “That’s a tune I wrote with a guy called Chris McCarty. The thing I love about that song is the sort of southwestern harmony that it has. That was a song we worked on for a long time to make it sound the way that it did in the studio. We had a thing called the Condor Innovator, which made your guitar sound different. It was one of the first guitar computers. So “Swingtown” was a studio production number.”

“Swingtown” is a song about people who’ve “been workin’ so hard.” They want to have a romantic evening out on the town and dance while the night is still young. ‘Swingtown’ may be a nickname for the local dance club scene.

The opening call: “O-OOOOO-O-O-O-O-O-O-O” is anthemic, and is sung by University of Wisconsin, Madison, football games. U of W, Madison, is the university where Steve Miller graduated.

There have been many changes in the Steve Miller Band line-up. In the recording studio for the Book of Dreams album was former psychedelic rock band Furious Bandersnatch guitarist Dave Denny. Born in Berkeley, California, in 1948, Denny returned to the Steve Miller Band in 1993 on their fifteenth album, Wide River. Guitarist Greg Douglass was born in Oakland, California, in 1949. He was in the Virtues in the late 60s, and then joined with former Jefferson Airplane guitarist Jorma Kaukonen’s band Hot Tuna. Later, Hot Tuna toured with the Jefferson Airplane and also Van Morrison. Douglass later joined The Greg Kihn Band while they had a hit single in 1983 titled “Jeopardy”.

Drummer and percussionist, Gary Mallaber, was born in Buffalo in 1946. He contributed percussion to Van Morrison’s albums Moondance and Tupelo Honey; Eddie Money’s “Baby Hold On”, The Muppets’ “Rainbow Connection”, and on studio albums with the Beach Boys, Bruce Springsteen, Bob Seger, Cher and others. Bass guitarist on “Swingtown”, Lonnie Turner, was born in 1947, and with the Steve Miller Band from 1966 to 1978 (excluding 1971-72). He later played in the recording studio for Tommy Tutone on his 1981 hit single “867-5309/Jenny”. While keyboard player on “Swingtown”, Byron Allred, was born in Logan, Utah, in 1948. Joining the Steve Miller Band in 1976 until 1978, Allred also added his keyboard skills in the recording studio for Jimmy Cliff and Peter Tosh.

While “Swingtown” was on the pop chart in Vancouver, the Steve Miller Band gave its second concert of the year at the Pacific Coliseum on November 17, 1977. In 1979, instrumental excerpts from “Swingtown” were featured in a Ford ’79 Mustang Commercial. In 1994 “Swingtown” was in the film My Girl 2 starring Dan Aykroyd and Jamie Lee Curtis.

In 1981 the Steve Miller Band released their album Circle of Love. This was a commercial disappointment. The single “Heart Like A Wheel” stalled at #24 on the Billboard Hot 100. However, it climbed to #6 in Vancouver. However, the 1982 album Abracadabra, with its number-one hit single “Abracadabra”, took the band to its zenith in international success. The title track peaked at #1 in Australia, Austria, Canada, Portugal, Spain, Sweden, Switzerland and the USA. And it climbed to #2 in Denmark, Ireland, South Africa and the United Kingdom. As well, “Abracadabra” made the Top Ten in New Zealand and Norway.

In 1984, the Steve Miller Band, hoping to cash in on the New Wave craze, released Italian E-Rays. The debut single, “Shangri-La”, featured drum machines, thumping bass and synthesizer sounds evoking the Yes single “Owner Of A Lonely Heart”. However, the single stalled at #57 on the Hot 100, and barely charted in Vancouver to top out at #26.

Subsequent album releases, Living in the 20th Century, Born 2 B Blue, and Wide River, were snapped up only by die-hard Steve Miller Band fans.

The Steve Miller Band remains intact as a band, despite the pandemic, with Steve Miller the only member from the classic lineup.

One response to “Swingtown by Steve Miller Band”