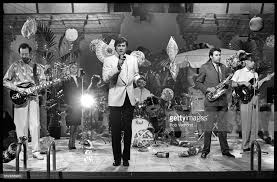 In 1945, Bryan Ferry was born in Washington, near Durham, England. His dad worked on a farm and took care of pit ponies. After he got his undergraduate degree, he took courses in fine art at Newcastle University in the mid’60’s. While he was studying, he was part of a student band named the City Blues. With his fine arts degree he started to teach pottery at a girl’s school in London. Concurrently, Ferry founded a band called Banshees. After that he formed a band that included Graham Simpson named the Gas Board. In 1968 he took up residence in London. Ferry was fired from his teaching post for hosting sessions with the ceramics students where they listened to records. Ferry moved on and assembled a band with bass player, Graham Simpson, saxophone and oboe player, Andy MacKay, synthesizer player, Brian Eno, guitarist, Phil Manzanera, and Paul Thompson on drums and percussion being the musicians who endured in the midst of a few minor lineup changes in the early years. He called the band Roxy Music.

In 1972 the band charted their debut single, “Virginia Plain”, to #4 on the UK Singles Chart. Roxy Music cut a striking visual image that was novel in the early 70’s. They became part of the vanguard of the glam rock trend in the UK. Between 1972 and 1981 the band charted nine singles into the Top Ten of the UK Singles Chart, including “Love Is The Drug”. The early style and presentation of Roxy Music was influenced by the art school backgrounds of its principal members. Ferry, Mackay and Eno all had studied at prominent UK art colleges during the mid-to-late 1960s, when these institutions were introducing courses that avoided traditional art teaching practice, with its emphasis on painting, and instead focused on more recent developments, most notably pop art, and explored new concepts such as cybernetics. As writer Michael Bracewell notes in his book Roxy: the band that invented an era, Roxy Music was created expressly by Ferry, Mackay and Eno as a means of combining their mutual interests in music, modern art and fashion.

In 1982 they released their eighth and final studio album, Avalon. The album peaked at #1 in the UK on the album charts for 3 weeks and staying on the album charts for over a year. A multi-million seller, the album contained several singles that were hits in the UK and Australia. “More Than This” was the debut single. It peaked at #6 in the UK and Australia. Although it only charted at #102 in the United States, it remains one of their best known singles there. It peaked at #9 in Vancouver, #2 in Winnipeg and #13 in Halifax, Nova Scotia. Next up was the title track, “Avalon” which sole well as a single in the UK (#13) and Australia (#22). Their third single release from the album was “Take A Chance With Me”. While this was the order the song were released in the UK, they ended up on the pop charts in some Canadian cities in a variety of sequences. By the time Roxy Music went to the studio to record the album, Avalon, they were only a trio of Bryan Ferry, Andy MacKay and Phil Manzanera. There were ten other additional musicians and vocalists assisting in the production. In the case of “More Than This” the additional personnel were backing vocalist Fonzi Thornton, percussionist Jimmy Maelen and Neil Jason on bass guitar.

Neil Jason has worked as a session musician for over three decades. He has appeared on studio albums recorded by John Lennon, Paul McCartney, Kiss, Michael Jackson, Cyndo Lauper, Billy Joel, Dire Straits and others.

“Take A Chance With Me” is a song about a deeper commitment. The singer references in shorthand the old phrase “two can play,” as in “two can play at this game.” The phrase dates back to at least the 1820’s where Washington Irving includes it in his book A History of New-York from the Beginning of the World to the End of the Dutch Dynasty, published under the pseudonym Diedrich Knickerbocker in 1809. In the case of  “two can play at that game,” one person who has been harmed by the action of another decides to return the favor. In other words, the gloves are off and there is no longer regard for being kind since trust has been sacrificed in the name of revenge. In the arena of love, often two can play at that game refers to people having affairs. The singer of the song wants the “song” of “two can play,” kept far away. As that song and its outcomes have only made the singer sad for a long time. Consequently, the singer is only interested in another way of being. He sings “all the world, even you, should learn to love the way I do.” By inference, this is said in contrast to the “two can play” approach to relationships with its’ inherent drama. What is this way of loving that the singer wants the world to learn about? It would seem a dedication to being honest, not playing the field. In the present moment, the singer finds he believes in the person he is currently dating. He wants them to take a chance and presumably work at something more permanent and not be lost in a world of constant affairs and changing partners.

Andy MacKay, when not with Roxy Music, has been part of recordings with Duran Duran, Mott the Hoople, John Cale, Paul McCartney, Godley & Creme, Brian Eno and others.

Phil Manzanera has performed with Bob Dylan, Keith Richards, Dave Edmunds and others. He has also been a session musician in studio recordings with Godley & Creme, Steve Winwood, John Cale and others.