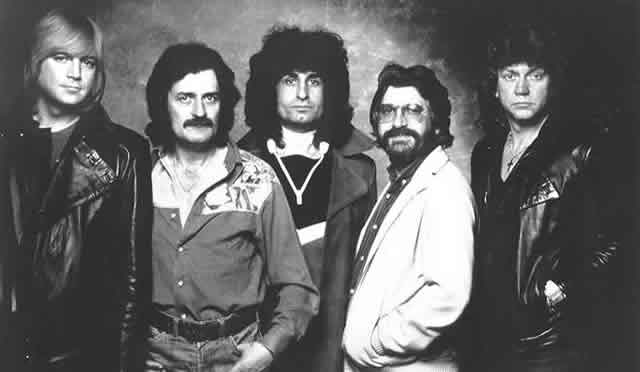 #333: Talking Out Of Turn by the Moody Blues

Born in 1941 in wartime England, Ray Thomas picked up harmonica at the age of nine. He was in the Birmingham Youth Choir and in October 1958 he joined a skiffle group called The Saints and Sinners. The band split up in June 1959. The Saints and Sinners helped Ray discover how well his vocals were received by audiences. Next, he formed El Riot and the Rebels, featuring Ray Thomas as El Riot dressed in a green satin Mexican toreador outfit. The band won a number of competitions in the Birmingham area. It was here that Ray became known for making an entrance onstage by sliding to center stage on his knees. On one occasion Thomas sent a row of potted tulips flying into the audience. El Riot and the Rebels appeared several times on a local variety show called Lunchbox. They made their debut on Lunchbox on November 14, 1962, and played “Guitar Tango” and “I Remember You”. Mike Pinder joined El Riot and the Rebels on keyboards. On April 15, 1963, El Riot and the Rebels performed at The Riverside Dancing Club in Tenbury Wells as the opening act for The Beatles. Pinder went off to serve in the British Army. When he returned, Thomas and Pinder left El Riot and the Rebels and formed a new band called the Krew Kats.

The Krew Kats played in Hamburg, Germany, for four months. They played at the Top Ten Club which The Beatles had made famous. But the Krew Kats didn’t see the money they were expecting. Thomas and Pinder had to walk 417 miles from Hamburg to the English Channel and borrow money for ferry fare back to England.

Once they were back in Birmingham, Thomas and Pinder were searching for other mates to form a new band. Seeing what was unfolding with the British Invasion, they signed up Denny Laine from The Diplomats on vocals and guitar. Clint Warwick, formerly with The Dukes, was on bass. For drums, they chose Graeme Edge, formerly with The Avengers. In addition to being lead singer, Thomas played flute and harmonica. Pinder was on keyboard and mellotron. Initially, they called the new band The Moody Blues Five. But within months they billed themselves as The Moody Blues.

The band recorded a single in November 1964 titled “Go Now”. In 1965, the single climbed to #1 on the UK singles charts and #5 in Vancouver. Though it stalled at #10 on the Billboard Hot 100, it landed at position #50 for the Top 100 Year-end singles of 1965 published by Billboard in December ’65. The band went on tour as an opening act for The Beatles. Expectations were high for a big followup single. However, the next eight single releases were all flops. In 1966, Denny Laine left the Moody Blues and was replaced by Justin Hayward. Laine would later join Wings, Paul McCartney’s band, from 1971 to 1981. Clint Warwick left to become a carpenter and a steady replacement was eventually found with John Lodge.

Justin Hayward was born in 1946 in Swindon, UK. After playing in school bands, at the age of 15 he bought at Gibson 335 guitar. The instrument would feature in all his studio recordings with the Moody Blues. In 1965, Hayward was in the band with Marty Wilde and The Wild Life. Hayward had auditioned for The Animals. Though he didn’t get hired, Eric Burdon passed on Hayward’s name and demo’s to Mike Pinder of the Moody Blues. While John Lodge, also born in 1946, met Ray Thomas when he was 15 years old. They kept in touch and when Clint Warwick exited the band, Thomas was in touch with Lodge about becoming a new member.

In 1967, nine single releases after “Go Now”, “Nights in White Satin” was released. The song was written in March 1967. It climbed to #1 in the Netherlands, #5 in Austria and #6 in Switzerland and Belgium. However, it stalled at #19 in the UK and fared no better than #103, just beneath the Billboard Hot 100. The song would be reissued five years later in 1972 and become an international Top Ten hit.

The followup to the 1967 release of “Nights In White Satin” was “Tuesday Afternoon”, from the album Days Of Future Passed.

Touring with material from the album was a challenge, unless the band lined up an orchestra to accompany them on stage. Next, the band released two singles from the album In Search of The Lost Chord. The second of these was “Ride My See-Saw”. On December 8, 1968, the Moody Blues appeared in concert at the PNE Garden Auditorium.

Their next album, On The Threshold Of A Dream, climbed to #1 on the UK album charts. It went platinum in Canada, however “Never Comes The Day” didn’t make it onto the pop charts. In 1969 the band released To Our Children’s Children. The album climbed to #2 on the UK charts and #14 on the Billboard 200 Album charts. But again, no single release was a commercial success. On November 9, 1969, the Moody Blues performed in concert at the PNE Agrodome in Vancouver.

In 1970, the album A Question of Balance featured the single “Question.”

A Question Of Balance climbed to #1 in the UK, #3 in the USA and sold platinum in Canada. Building on that success, Every Good Boy Deserves A Favor went to #1 in the UK in 1971, #2 in the USA and was certified platinum in Canada. It also featured the song, “Story In Your Eyes.” The single stalled at #23 in the USA, but peaked at #1 on CKVN in Vancouver. On September 29, 1971, the Moody Blues gave a concert in Vancouver at the Pacific Coliseum.

In 1972, The Moody Blues released their eighth studio album, Seventh Sojourn. Again, the album was a best seller and accompanied by the Top 20 hit, “I’m Just A Singer (In a Rock and Roll Band)”. After a world tour with a band called Asia in 1973, the Moody Blues took a break while individual bandmates did some solo work. After a five year hiatus, in 1978 the band reunited to release Octave. Mike Pinder wasn’t happy with the album and opted out of the tour to support it. On May 24, 1979, the Moody Blues returned to Vancouver to perform at the Pacific Coliseum. 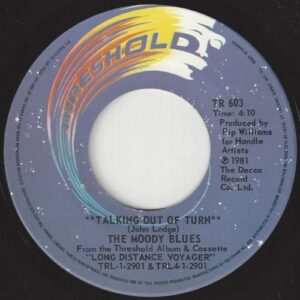 “Talking Out Of Turn” was written by John Lodge. It is a song about someone who “talks out of turn.” The narrator tells us that he used angry words that caused his loved one to break apart emotionally. He now considers himself a fool for having been responsible for cancelling out a future together due to his ill-chosen way of talking. He sings “If I upset you, I didn’t mean to hurt you, I didn’t mean to make you cry.” Given she did apparently cry, it would seem that “if” is not an accurate two letter word. He did upset her, enough that she cried in response to his angry verbiage.

To talk out of turn is  phrase that means to say something erroneous, foolish, or impudent at an inappropriate time, or when one does not have the authority to do so. Either way, the guy in this song is out of line and his words have caused irreparable damage to the relationship. Consequently, he let this other person “slip through my fingers” and “escape.” In the aftermath, finding himself once again on his own, he observes the relationship is “shot to pieces, when will I ever learn.”

The Moody Blues have released four live albums, the most recent, Days of Future Passed Live, released in 2018. The live concert took place at the Sony Centre for the Performing Arts in Toronto, Ontario, in 2017.

On April 14, 2018, the Moody Blues were inducted into the Rock ‘N Roll Hall of Fame. Currently  the Moody Blues’ John Lodge is scheduled for eleven concert dates in February and March 2020 across six states in the USA. Justin Hayward’s performance on the Blue Cruise – scheduled to depart Miami on April 1, 2020, for St Maarten, St. Thomas and Great Stirrup Cay – was postponed due to the Coronavirus pandemic. The postponed cruise promises to include the Zombies, Art Garfunkel, Procol Harum, Dave Mason, Alan Parsons Project, Al Stewart, Poco, Deep Purple, Focus and the Strawbs – when things get back to normal.