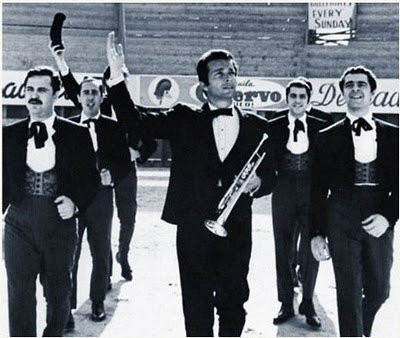 Herb Alpert was born in 1935 in Los Angeles. His parents were Jewish immigrants, from the Ukraine and Romania. He started to play the trumpet at the age of eight. After he graduated from high school, he joined the United States Army and played trumpet. In 1956 he was one of the drummers at Mt. Sinai in the film The Ten Commandments. In 1957 he became a songwriter for Keen Records. He teamed up with Lou Adler in 1958 and released a single titled “The Trial” credited to Herb B. Lou and the Legal Eagles. The recording was of the “break-in” genre, like Buchanan & Goodman’s “Flying Saucer” from 1956. The single had break-in’s from “Tears On My Pillow” by Little Anthony & The Imperials, “Splish Splash” by Bobby Darin, “To Know Him Is To Love Him” by the Teddy Bears, “Little Star” by The Elegants, “Volare” by Domenico Modugno and others. “The Trial” made the Top Ten in Cincinnati, Ohio.

In 1959, Herb Alpert and Lou Adler were A&R men at Keen Records. They contacted the Untouchables, expressing interest in producing for them. Rip Spencer recalls, “we got along pretty good and they presented to us a music track that was recorded on the East Coast—something happened to that group—they wanted us to listen to that track and see if we could make a song out of it.” The record co-written by Alpert and Adler was “Poor Boy Needs A Preacher”. The song, with it’s Drifters influenced sound, was play listed as early as March 1960 in Pittsburgh (KQV), Philadelphia (WIBG), Los Angeles (KRLA) and Cleveland (WHK) where it charted best peaking at #17. Alpert and Adler also penned a few other songs including “Wonderful World” by Sam Cooke, and “Baby Talk” for Jan & Dean.

Alpert and Adler had an office on Sunset Strip, where the group would sometimes rehearse. Herb Alpert was just beginning to play the trumpet. Rip Spencer recollects “while we’d rehearse, Herbert would put his little licks in between. We used to tell Herbie, ‘Hey man, don’t do that, you’re throwing us off.’ He really couldn’t play trumpet at that time, but boy, look at him now!” Along with their debut release, other songs for the Untouchables were co-written by Herb Alpert and Lou Adler including “New Fad”, and their second single, “Vickie Lee“. Adler and Herb Alpert took on Deane Hawley as a prospective teen idol. Hawley had good looks and was in the middle of his studies at university. In the summer of 1959, when he was still 21, Hawley had a regional hit in San Bernardino titled “New Fad”. He later charted a Top Ten hit in Vancouver (BC) in 1962 titled “Queen Of The Angels“. In 1960, credited as Herbie Alpert, he released a “gingerbread” tune titled “Finders Keepers”. It was not a hit. In the summer of 1962 Alpert released a single titled “Tell It To The Birds”, credited to Dore Alpert. The song made the Top 20 in Los Angeles, complete with bird sounds.

Meanwhile, during a visit to Tijuana, Mexico, Alpert heard a mariachi band while attending a bullfight. Following the experience, Alpert recalled that he was inspired to find a way to express musically what he felt while watching the wild responses of the crowd, and hearing the brass musicians introducing each new event with rousing fanfare. Alpert adapted the trumpet style to the tune, mixed in crowd cheers and other noises for ambience, and renamed the song “The Lonely Bull”. He formed the Tijuana Brass in 1962 and released the single. The instrumental climbed to #4 in Vancouver (BC) and #6 on the Billboard Hot 100 in November 1962. The final two weeks of the chart run for “The Lonely Bull” on CFUN in Vancouver (BC), the B-side, “Acapulco 1922” began to climb up the C-FUN-Tastic Fifty. “Acapulco 1922” debuted at #50 while “The Lonely Bull” slid to #34 on December 8, 1963.

In 1963 The Tijuana Brass covered Ben E. King’s “Spanish Harlem” and had a minor hit with the tune in Vancouver (BC). Meanwhile, Alpert released one more single under the pseudonym Dore Alpert with “Dina”, a Top Ten hit in Seattle. The single was released on a label Herb Alpert co-founded called A&M Records. In 1964 Herb Alpert’s Tijuana Brass released “The Mexican Shuffle” from their South Of The Border album.

In the fall of 1965 Herb Alpert released “A Taste Of Honey” from his Whipped Cream and Other Delights album. The single peaked at #7 on the Billboard Hot 100 and #11 in Vancouver (BC). The album was the biggest seller for Herb Alpert and the Tijuana Brass. The album cover with model Delores Erickson covered in whipped cream was iconic. Alpert told the New York Times in 2013 that she was actually covered in shaving cream. Of course ‘Shaving Cream and Other Delights’ didn’t have the same ring to it as the album title they went with. And in early 1966 Alpert and the Tijuana Brass had a double-sided Top Ten hit in Vancouver (BC) with “Zorba The Greek” and “Tijuana Taxi”. Tijuana is a city across the Mexico-United States border from San Diego, California, and its southern suburbs of Chula Vista and San Ysidro. The city’s name comes from the rancho that the Spanish soldier, Santiago Argüello  Moraga, founded in 1829 on his Mexican land grant, naming it Rancho Tía Juana. The first Spanish mission called the settlement variously as La Tía Juana, Tiguana, Tiuana, Tiwana, Tijuan, Ticuan, as well as Tijuana. It’s proper name remained Tía Juana until the mid-20th century when it became identified as Tijuana on geographical maps. Most historians agree that Tía Juana is derived from the word Tiwan (“by the sea”) in the language of the Kumeyaay, the aboriginal inhabitants of the San Diego-Tijuana region in the 1820s.

After the Mexican-American War, Mexico lost the province of Alta California. This was a land mass that included the current states of California, Nevada and Utah. It also encompassed parts of Arizona, Colorado, New Mexico and Wyoming. Over a thousand Mexican Spanish-speaking inhabitants of Alta California moved south to Tía Juana in 1848. This influx of new residents shifted the economy from ranching and made the town a center of commerce. The city was established in 1889.

Tía Juana grew in the 1880s in part because of the 1884 novel Ramona written by Helen Hunt Jackson. The novel was set in Southern California in the years after the Mexican-American War. It portrayed the life of an orphaned Scottish–Native American girl, who suffers racial discrimination and hardship. Although Jackson wrote the novel to awaken Americans to the lingering injustices in the aftermath of the war, what caught readers attention was different. It was the sentimental portrayal of Mexican colonial life in Ramona that helped create a unique cultural identity for the region. Its publication coincided with the arrival of railroad lines in the region, countless tourists visited who wanted to see the locations of the novel, including Tía Juana.

The Panama-California Exposition of 1915 brought many visitors to San Diego. Tijuana attracted these tourists with a Feria Típica Mexicana – Typical Mexican Fair. This included curio shops, regional food, thermal baths, horse racing and boxing. The first professional race track opened in January 1916, just south of the border gate. Legal drinking and gambling attracted U.S nationals in the 1920s during Prohibition. The Avenida Revolución became the center of the city’s tourism. It featured casinos and the Hotel Caesar’s, birthplace of the Caesar salad.

In 1925, the city attempted to shed its image of hedonism and lawlessness by renaming itself Zaragoza, but its name reverted to Tijuana in 1929. Brooklyn born Margarita Carmen Cansino worked at clubs in Tijuana from the age of 12, beginning in 1931. She was “discovered” and went to Hollywood where she was billed as Rita Hayworth.

Alpert and the Tijuana Brass continued to chart into the Top 20 in 1966 in Vancouver with “What Now My Love”, “Spanish Flea” and “The Work Song”.

Over the years Herb Alpert produced Billy Riley, Chris Montez, Sergio Mendes & Brasil ’66, Chet Atkins and others. In 1964 Lucille Starr, one half of the Canadian Sweethearts, recorded “The French Song”. Starr sang the solo and backed by the Tijuana Brass. One of the recording engineers the Tijuana Brass worked with was Joe. B. Mauldin, a bass player with The Crickets. Alpert also co-wrote many songs including with Alison Dewar (aka Graham Turnbull) who wrote “Blue Ribbon Baby” for Tommy Sands.

In 1968 Herb Alpert returned to the recording studio to give his best vocal performance, far surpassing his previous attempts when billed as Dore Alpert or Herbie Alpert. His treatment of Hal David and Burt Bacharach’s “This Guys In Love With You” took him to number one on the Billboard Hot 100, Vancouver (BC) and many other radio markets in the USA and Canada. Alpert knocked Simon & Garfunkel’s “Mrs. Robinson” out of the top spot on June 22, 1968. It was ranked #7 for the year of 1968 by Billboard magazine.

Alpert was approached in the late 1970s by Gino Vanelli with a demo. It led to a promising career for the young recording artist from Quebec. In 1979 Herb Alpert returned to the pop charts with a number instrumental hit titled “Rise”. Over the years Herb Alpert charted 22 singles into the Top Ten of the Billboard Adult Contemporary chart. He also had one number one hit on the Billboard R&B chart in 1987 titled “Diamonds”, with Janet Jackson on vocals.

On his website it states “Broadway theatre is another arena in which Alpert has enjoyed success. His producing credits include the Tony Award/Pulitzer Prize-winning production of Tony Kushner’s Angels in America, Jelly’s Last Jam, Arthur Miller’s Broken Glass, August Wilson’s Seven Guitars and The Boy from Oz.”

As of 2019 Herb Alpert has released 45 solo albums, plus numerous compilations. Alpert is currently on tour with over twenty engagements between November 2019 and May 2020. This includes a concert in Vancouver (BC) at the Chan Centre for the Performing Arts on April 9, 2020.

Alpert has won nine Grammy Awards and ” In an interview a few years ago with the Chicago Tribune, Herb Alpert said “There’s a certain magic that comes from creating. I love the mystery of art. You can’t really put your finger on why you like a certain dancer or why you like a certain song that you hear on the radio. It touches, you know? And when it touches, it’s meaningful to you.”