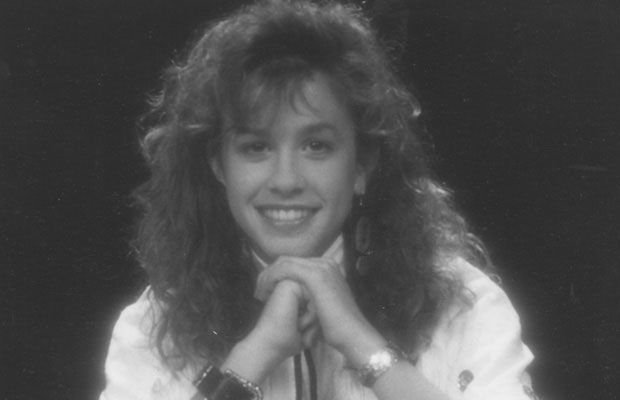 #559: Too Hot by Alanis Morissette

Alanis Nadine Morissette was born in Ottawa in 1974. At the age of six she began to take piano, and the following year took up dance. In Junior High School she appeared on five episodes of a local CTV comedy show called You Can’t Do That on Television. In 1987 she recorded a demo with the help of Rich Dodson of The Stampeders. Four years later she released her debut album, Alanis. Her debut single was titled “Too Hot”. “Too Hot” was influenced by Janet Jackson’s 1986 studio album Control. That album featured Jackson’s Top Ten hits “What Have You Done For Me Lately”, “Nasty”, Control” and “When I Think Of You”. Jackson’s Control fused hip-hop, sampling, uptempo dance, disco and funk. Jackson’s album was viewed as the originator of a new genre called new jack swing. Alanis Morissette styled her debut album on new jack swing. Morissette does some rapping and singing throughout “Too Hot”. In the chorus, she tells a boy trying to reach for his goal that he’s “Always too hot” and “never too cold.” She concludes that his “best shot” is “too hot to hold.” Cheering him on she encourages him to “go for gold.”

“Too Hot” was cowritten by Alanis Morissette and Leslie Howe. Howe was one half of the Toronto synth-pop duo One To One, who had a number of hits in the mid-80s including “Hold Me Now”, “Angel In My Pocket” and “There Was A Time”. Howe went on to write songs for the Artificial Joy Club.

“Too Hot” peaked at #4 in Hamilton (ON) and #9 in Vancouver (BC). At the 1992 Juno Awards “Too Hot” got a nomination for “Single of the Year,” which she lost to Tom Cochrane for “Life Is A Highway”.  A remix of “Too Hot” titled “Hott Shot” was nominated for “Best Dance Recording.” Alanis Morissette lost out to Bootsauce’s cover of Hot Chocolate’s “Everyone’s A Winner”.

Three more singles from the Alanis album, “Walk Away”, “Feel Your Love” and “Plastic”, kept Alanis Morissette on AM Top 40 radio in Canada into 1992. Her second album, Now Is The Time, also featured four single releases, including “An Emotion Away” and “No Apologies”. After two album releases, Alanis Morissette was being described as Canada’s answer to American recording artists Tiffany and Debbie Gibson. This changed in 1995 with the release of her third album Jagged Little Pill.

The first single release from her third album, “You Oughta Know”, got added to the playlist of KROQ-FM in Los Angeles. The single opened her up to the alternate rock audience where the single topped the Billboard Alternate Rock singles chart for five weeks in the summer of 1995. The song got noticed for its sexual frankness and use of swear words. “You Oughta Know” also made the Top Ten on the pop charts in Australia, Canada, New Zealand and the USA. It also made the Top 40 in Belgium, Sweden and Scotland, and the Top 20 in the Netherlands. Her next single release from Jagged Little Pill was “Hand In Pocket”. The single topped the Billboard Alternate Rock singles chart for a week in October 1995. It also topped the Canadian RPM singles chart for five consecutive weeks starting in December 1995. As well, the single was her second consecutive Top Ten hit in New Zealand.

In 1998 Morissette released “Uninvited”, a track from the film and soundtrack for City of Angels. The song climbed to #7 on the Canadian RPM singles chart. The single won two Grammy Awards in 1999 for Best Rock Song and Best Female Vocal Rock Performance. A third Grammy nomination for Best Song Written Specifically for a Motion Picture or for Television was given not to Alanis Morissette, but to James Horner and Will Jennings for “My Heart Will Go On” from Titanic. Since then Alanis also has written songs for a number of other films, including The Devil Wears Prada.

In the fall of 1998 Alanis released her fourth studio album Supposed Former Infatuation Junkie. The debut single was “Thank U”. The song was her fifth number one hit on the Canadian RPM singles chart. It also made the Top Ten in Austria, Iceland, Italy, the Netherlands, New Zealand, Norway, Poland, Scotland and the UK.

In 2002 Morissette released her fifth studio album titled Under Rug Swept. The debut single, “Hands Clean”, became her sixth number one hit on the Canadian RPM singles chart. It also climbed to number one in New Zealand, and the Top Ten in Australia and Switzerland. Her last Top Ten hit anywhere was “Everything” from her sixth studio album So-Called Chaos. It became her twelfth Top Ten hit on the Canadian RPM singles chart. To date she has released eight studio albums, several compilations and one live album.

Between 1995 and 2018 Alanis Morissette has launched 19 separate tours. Three of these have been as co-headliner with Tori Amos (1999), the Barenaked Ladies (2004) and Matchbox Twenty (2008). Among her tours Morissette’s Junkie Tour, from August 1998 to December 1999, was her most ambitious. It took her across six continents and performing on 126 stages.

In 2018 the American Repertory Theatre in Cambridge, Massachusetts, performed a musical titled Jagged Little Pill. It featured the songs from Alanis’ 1995 breakthrough album. In addition to her recording and performing career, in the Alanis Morissette has appeared in several seasons (2009 and 2010) of the American Comedy-drama TV show Weeds. She has appeared in live theatre in The Vagina Monologues and in the off-Broadway play The Exonerated as death row inmate Sunny Jacobs. As of 2016, Alanis Morissette has also been writing a column for the Guardian.