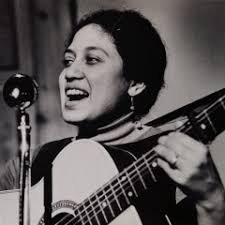 In 1939, Norma Cecilia Tanega was born in Vallejo, California, in the East Bay. Her mother was born in Panama. Her Filipino-American father was a bandmaster in the United States Navy on the USS Hornet. At the age of nine she began taking piano lessons. By the time she was sixteen Norma Tanega was doing piano recitals playing Beethoven and Bartok. She was also exhibiting her paintings at Long Beach’s Main Public Library on Pacific Avenue, and the Municipal Art Center. She studied music and graduated out of Claremont in 1962 with a Masters Degree in Fine Arts. She backpacked across Europe and pursued her artistic and musical passion. Returning to the USA, she moved to New York City and became involved in the folk scene in Greenwich Village.
She got work at a mental hospital where she sang and played songs for the patients. But it was at a summer camp in the Catskill Mountains that Norma Tanega was “discovered.” A fellow camp counselor was a high school teacher in Brooklyn. One of the  instructors at the Brooklyn high school was also working part-time as a record producer with a man named Herb Bernstein. Bernstein came to the summer camp to hear Norma Tanega. He was impressed and took Norma to meet and play for the Four Seasons arranger and producer, Bob Crewe. Crewe was also taken with Tanega’s talent and potential as a recording artist. Crewe signed Tanega to a record deal. The outcome was the album Walkin’ My Cat Named Dog. It was produced by Herb Bernstein. The first single release was the title track, “Walkin’ My Cat Named Dog”. The song featured Norma Tanega playing the harmonica. After “Walking My Cat Named Dog” was released, Norma told a reporter some of the background for the inspiration for her song. Tanega lived in a rental apartment where dogs were not allowed. She felt this was unfair, recalling, “I had always wanted a dog, but because of my living situation I could only have a cat. I named my cat Dog and wrote a song about my dilemma.” Many radio listeners could relate to being renters who lived in buildings where dogs were not allowed. Naming her cat “Dog” was Tanega’s way of reminding the landlord that she didn’t agree with the “no dogs” policy. Writing and recording the song was her whimsical way of protesting.

In 2008, Susan Hollis moved from the British Columbia interior town of Nelson in the Kootenay’s to Vancouver. Hollis was surprised and discouraged by how hard it was to find a place to rent with a dog. She found that spacious and beautiful apartments were all enforcing a “no dog” policy. “If it’s dog-friendly, it’s a grimy basement suite with poor lighting and the stale smell reminiscent of that classmate’s house you visited in Grade 2 — the classmate allowed to drink as much strawberry Quick as he wanted, who had no bedtime, and a mother who smoked inside.” The aversion to having renters with pets, especially a dog, was the horror stories of having dogs that clawed the apartment door, urinated on the grass requiring the lawn to be reseeded, or urinating on the apartment floor carpet. Hollis found that landlords were responsible for costs when damage caused by a pet was extensive. In Vancouver, “when an owner accepts a tenant with a pet, they take partial responsibility for any damages that ensue if the deposit doesn’t cover the repairs. The Tenancy Act says that a landlord must not require or accept a security deposit or a pet damage deposit that is greater than the equivalent of 1/2 of one month’s rent, which in the case of extreme damages won’t go the distance, even though pet owners often pay double the amount paid by non-pet renters.”

“Walking My Cat Named Dog” peaked at #3 in Vancouver, Honolulu, Newport News (VA) and San Jose, #4 in Montreal #5 in Boston, Syracuse (NY), Louisville (KY) and Orlando,  #6 in Madison (WI), #8 in Miami and San Francisco and #9 in Hamilton, Ontario. Her follow-up single, “A Street That Rhymes at 6.A.M.” was hit bound on the CKLG charts four weeks after “Walking My Cat Named Dog” dropped off the charts in mid-April of ’66. However, the single only spent one week on the chart.

Her album, Walking My Cat Named Dog, included liner notes by San Francisco’s Bill Keane applauding her departure from protest songs like “Eve Of Destruction.” It was her “positive perception” that was so appealing: “She has the rare ability of expressing verbally what is common and beautiful. Take for example the sound of a pebble falling into a pond, or the feeling experienced when the sun’s last traces fall from the horizon…. She offers an Adults-Eye-View into the beauty usually only appreciated by children.” Her final track, “I’m the Sky,” concluded the album with folk operatic chanting: “it’s love, it’s mine, it’s yours, it’s life, it’s free.”

“Walking My Cat Named Dog” also climbed to #22 on the UK singles charts. In 1966, when Norma Tanga flew to London, UK, she met Dusty Springfield. The meeting took place when they were both appearing on the variety show Thank Your Lucky Stars. Dusty flirted with Norma and after Norma moved back to New York, a huge phone bill racked up. When Springfield flew to the Big Apple to see Tanega, the pair had an awkward meeting. After all, it was three years before Stonewall and two female adults being involved romantically was illegal in America. Finally, Dusty spoke with Norma, saying, “I’ve come all this way across the ocean to see you. The least you could do is come across the floor.”

Norma Tanega released several non-album singles in late 1966, including “Bread”. However, the song, that celebrated loaves of bread and the way they nourish and help people build community, was a commercial flop.

In early 1967, Norma Tanega flew to London and took up residence with Dusty in Ennismore Gardens in Kennsington.

In 1971, Norma Tanega recorded her second album, this time with RCA. The title was I Don’t Think It Will Hurt If You Smile. The album contained many songs about love that reflect Tanega’s relationship with Dusty Springfield. She said later, “Unfortunately, I could not promote the album because I had to move back to the United States for family reasons.” In 2011, the website Let’s Talk Dusty.com sold what is referred to as the “lost album” in an exclusive re-issue. In 1972, Norma moved back to California and began painting and teaching music.

In 2011, at the age of 72, Norma Tanega was still singing, playing and recording. Her group, Baboonz, recorded an album titled 8 Songs Ate Brains. She was also teaching English as a Second Language to adult immigrants. There is a website for Norma, now 87, called normatanega.com. However, she doesn’t personally use social media.