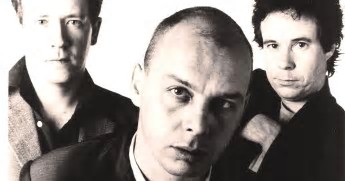 #1414: I Wanna Be A Flintstone by The Screaming Blue Messiahs

In 1980 Bill Carter and Chris Thompson were in a London, UK, band called The Small Brothers, with Tony Moon on vocals. They changed their name to the Motor Boys Motor and released a single in the UK called “Drive Friendly.” A line-up change followed with Tony Moon leaving the band and being replaced with Kenny Harris. By 1983 they billed themselves as The Screaming Blue Messiahs. Bill Carter played guitar and was the lead vocalist. Thompson was the backing singer and bass player, while Kenny Harris played drums. The group emerged in the wake of the pub rock and punk scenes that had been very predominant in London’s live music circuit from the late ’70’s into the early ’80’s. Pub rock was deliberately nasty, dirty and post-glam. Dress style of Pub Rockers was based around denim and plaid shirts, tatty jeans and droopy hair. The Screaming Blue Messiahs were a classic power trio. They performed in small venues and recorded three studio albums between 1983 and 1990. They toured extensively throughout Europe, North America and Australia and Asia. They were given stellar reviews by music critics throughout their years on tour and for their recordings. Critics especially liked the Screaming Blue Messiahs  aggressive blend of rhythm and blues, punk and rockabilly. Bill Carter recalled later that the band’s name was arrived at when Ted Caroll, who played with Big Beat, gave the thumbs down to the band’s initial decision to bill themselves as The Blue Messiahs. Caroll felt the name sounded too pub rock.

William Carter was born in Darlington in County Durham, UK, in 1951. Carter’s first musical instrument was a drum kit, But it was young Bill’s instant fascination with The Who live on stage that ignited a lust for music and the guitar. His first foray into music came as drummer in a school band, The Aliens. In his late teens Carter moved down to London, and at the age of 20 enrolled in Ravensbourne College of Art in South London. Bill describes his work as “big, screen-print paintings, pictures of the country, everyday things. I don’t know if they had much to do with my music, but I always tried to make them quite hard and exciting and atmospheric.” It was also around the same time in the early 70’s that Bill started seriously playing the guitar. His first was a Rickenbacker, “the Pete Townshend one”, but he later moved to, and pretty much stuck with, Fender Telecasters.

London born Chris Thomspon spent several childhood years in the USA. He also developed a love of rock ‘n’ roll and was a regular Rolling Stones punter at clubs around London. Thompson first met Bill Carter when Thompson was working as a painter and decorator. They formed The Small Brothers and were joined by Pete Lodge on harp and Steve Atkinson (from the Subway Sect) on keyboards. In 1980 they released a single titled “Got The Hurt”. After a few years as Motor Boys Motor, Carter and Thompson decided to go in a new direction. The two placed an ad in Melody Maker for a drummer. Amongst several respondents was old friend Kenny Harris, from the earlier Small Brothers.

The Screaming Blue Messiahs had a sound described as “rockabilly from hell.” Their lyrics evoked a mixture to references to Americana: cars, guns, airplanes, JFK and broadcast evangelism. In 1984 The Screaming Blue Messiahs recorded an EP titled  Good and Gone. It contained six tracks including a cover of Hank Williams’ tune, “You’re Gonna Change.” Good and Gone made its easy onto the UK independent record chart, peaking in the Top 20 and spending six months on the chart.

On July 24, 1984, The Screaming Blue Messiahs  On 24 July 1984, appeared on the BBC’s John Peel Show where they sang a number of songs including “Good And Gone” and “Let’s Go Down To The Woods And Pray” The broadcast was extremely popular and led to “Good And Gone” finding its way onto an album sampler of Peel Sessions. In December 1984, The Screaming Blue Messiahs appeared on The Old Grey Whistle Test on the BBC, and shortly afterward began a tour of the Netherlands.

In 1985 the band released their first studio album, Gun-Shy. The album track “Twin Cadillac Valentine”, was influenced from the Spencer Davis Group song “Strong Love”, was released as the first single in the fall. The song, Carter says, was “…about girls…cars…love, attempted kidnapping and wide open spaces.” The NME (New Musical Express) raved about the album: “[o]n the strength of this album, I’d say the Messiahs are going to be very, very big indeed.” The band decided to tour with the album, traveling to Germany, Finland, UK, USA, Canada, Australia and New Zealand. For part of this world tour they were the concert openers for The Cramps. Two further singles, “Smash The Marketplace” and “Wild Blue Yonder,” were released from Gun-Shy in 1986.

In an article in International Musician, music critic Jim Betteridge described Bill Carter’s playing style: “[h]e plays without a pick, crashing the flesh of his fingers into the strings with little regard for its mortality. Blood can often be seen splattered across the scratch plate – or the place where the scratch plate would be if it hadn’t been removed. To avoid completely razoring the top of his fingers off, and I suppose also because he likes the sound, William uses unusually heavy bottom strings; Rotosound (and nothing else will do) 56, 48, 28, 16, 13 and 12. But he gives ’em such a sound thrashing that one string breaks every couple of numbers and often one a number, and I don’t just mean the top strings; Es and As cop it an’ all. In the words of his roadie, ‘He goes fooking bonkers!'”

In 1987 the band released their second album, Bikini Red.”Bikini Red” and “I Can Speak American” were both released as singles in 1987. January 1988 saw the single release of “I Wanna Be A Flintstone” (a reworked track from an album by Motor Boys Motor which Carter and Thompson had both been members. The record became an instant hit, peaking at #28 in the UK charts. The song’s success saw the band appearing on one of the BBC’s Top of the Pops and Saturday morning kids’ show. Two videos were made for the song, both making use of cartoon clips from the Flintstones TV series. The song spent seven weeks on the CKLG charts in Vancouver and climbed to #19.

“I Wanna Be A Flintstone” is a song that does a riff on the Flintstone’s cartoon. The Flintstone’s is an animated cartoon series that originally ran from September 1960 to April 1966. As a cartoon, it was the first to have a scheduled broadcast in during prime time TV. The continuing popularity of The Flintstones rested heavily on its juxtaposition of modern everyday concerns in the Stone Age setting.

The Stone Age setting allowed for gags and word plays involving rocks and minerals. For example, San Antonio was “Sand-and-Stony-o,” the country to the south of Bedrock was called “Mexirock” (Mexico). Travel to “Hollyrock”, a parody of Hollywood, usually involved a flight on a giant pterosaur, with the fuselage strapped to its back. Sun Valley was “Stone Valley” and run by “Conrad Hailstone” (Conrad Hilton). The last names “Flintstone” and “Rubble,” as well as other common Bedrock surnames such as “Shale” and “Quartz,” were part of the world created on the cartoon series. The names of Bedrock’s celebrities mirrored Hollywood and other famous people in the early to mid-60’s.  Gina Loadabricks (Gina Lollobrigida), Gary Granite (Cary Grant), Stony Curtis (Tony Curtis), Ed Sullivanstone (Ed Sullivan), Rock Hudstone (Rock Hudson), Ann-Margrock (Ann-Margret), Jimmy Darrock (James Darren), Alvin Brickrock (Alfred Hitchcock), Daisy Kilgranite (Dorothy Kilgallen), Perry Masonite (Perry Mason), Mick Jadestone and The Rolling Boulders (Mick Jagger and the Rolling Stones and The Beau Brummelstones (The Beau Brummels).

The TV series main character was Fred Flintstone, an accident-prone bronto-crane operator at the Slate Rock and Gravel Company and the head of the Flintstone household. His wife, Wilma, was more intelligent and level-headed than her husband, though she often has a habit of spending money. She often was a foil to Fred’s poor behavior. Pebbles Flintstone was their infant daughter who was often pictured crawling on the floor and facing either the stone slab flooring or looking ahead, or often sitting on the floor. The Flintstones pet was Dino the dinosaur who behaved more like a modern dog. The neighbors of the Flintstones were Barney and Betty Rubble and their infant son, Bam-Bam.

The Screaming Blue Messiahs lyrics open with this line “I wondered around in the twilight zone, a little baby Flintstone on my own.” The line cleverly evokes another TV show from early Americana. The Twilight Zone was a TV series that ran from 1959 to 1964. The series consisted of unrelated dramas depicting characters dealing with paranormal, futuristic, Kafkaesque, or otherwise disturbing or unusual events. The characters who found themselves dealing with these strange, sometimes inexplicable happenings were said to have crossed over into “The Twilight Zone.” Each story typically features a moral and a surprise ending. By referencing the Twilight Zone in the opening line, the Screaming Blue Messiahs suggest that the characters in the Flintstones animated cartoon series were in a sort of twilight zone themselves. In particular, Pebbles Flintstone is the focus of “I Wanna Be A Flintstone”. Her twilight zone world involves crawling endlessly around the stone flooring of the Flintstone house, having a pet dinosaur whose head is in the kitchen and whose tail is out the door at the other end of the home. The song briefly references the typical banter of Fred who’s trying to find Wilma, and bellowing her name. This is Pebbles Flintstone’s world or twilight zone.

Though “I Wanna Be A Flintstone” didn’t crack the Billboard Hot 100, the album, Bikini Red, made it to #172 on the Billboard 200 Album charts. After “I Wanna Be A Flintstone”, the Screaming Blue Messiahs released a third album called Totally Religious. A video was produced of one of the tracks, “Four Engines Burning (Over The USA).” The song had some guitar that was evocative of U2. However, the band got in a dispute with their record label and the album was removed from distribution after only one month.

After the Screaming Blue Messiahs split in 1990, Thompson and Harris formed a band called Dynamo Hum. That band morphed into the Killer B’s. Though Kenny Harris left later in the 90’s, Chris Thompson remained with the band ’til 2014. Meanwhile, Kenny Harris went on to play a while with The Men They Couldn’t Hang before quitting the music business for almost two decades. Harris various was engaged as a house husband, a baker and a published author, working from his home in Surrey. More recently, Chris Thompson and Kenny Harris have continued to work together playing the occasional gig as a two-piece and in 2015/16 began recording again. In contrast, Bill Carter has lived a private life and only got involved for one day in 2004 to rehearse with Thompson and Harris for an aborted tour to Japan, after interpersonal dynamics in rehearsal sunk the promise of a reunion tour to Japan.

In 1994, “I Wanna Be A Flintstone” was included on the soundtrack to the US version of the Flintstones film.