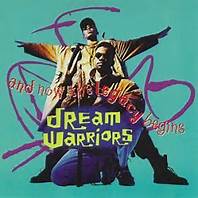 #1230: Wash Your Face in My Sink by Dream Warriors

The Dream Warriors were a duo who joined together in 1988. The duo were Louie Robinson and Frank Allert who lived in the Jane and Finch and Willowdale neighborhoods in Greater Toronto. Louie Robinson had recorded a single that year when he was featured on Michie Mee and L.A. Luv’s single “Victory Is Calling.” The dancehall reggae tune with Jamaican funk, rap and hip-hop got the attention of others in the Toronto recording scene. By 1991 their debut album had received critical acclaim across Europe and Canada winning awards and music magazine rankings among the top albums of the year. Robinson went by the moniker of King Lou and Frank Allert was known as Capital Q. By late 1990 they had a studio album ready for release, And Now the Legacy Begins. The album went on to sell over 800,000 copies. It was listed in the Top 25 albums of the year by industry music magazines in the UK, Germany, Canada and Spain. The monthly Spanish music magazine rockdelux ranked And Now the Legacy Begins as the number 3 album of 1991. Though the album and several singles from the album sold well in Canada and in Europe, the Dream Warriors were mostly given a pass by American record buyers. The album received a Juno Award in Canada for the Rap Record of the Year in 1992.
The debut single from the the album was “Wash Your Face in My Sink” which entered the UK singles chart in July 1990 and climbed to #16, a position it also peaked at in Vancouver on CKLG. The Dream Warriors have just spoken into a language called speech. With hip-hop and Old School rhyme, they make it clear that people who dare try to wash their face in their sink ~ and leave a ring around the basin ~ should never ever dare try to repeat that offense. Period! The song is a specific example of setting boundaries with others regarding what they can and cannot do with someone else’s stuff. The person who is telling the fink not to wash their face in my sink will not be a pushover. They have standards for how they keep their bathroom, and specifically their sink, clean. Those who can’t live up to that standard of cleanliness have no business washing their face in the sink in question.

How many people have lived with roommates, housemates, spouses and other members of their household who have a different standard for keeping a place clean and tidy? Most of us are not fortunate enough to live with people who are in exactly the same zone of tidiness and cleanliness. Consequently, we have to have to sit down and have a conversation. Expressing our expectations for ourselves and others in our household about how to keep things clean, and who is responsible for what chores, helps get everyone on the same page. But too often people just make assumptions. Too often we don’t notice how others around us are keeping house. Someone crosses a line and they get some feedback about what they’ve done. As the Dream Warriors ask: “How does it feel now that I’ve got you all to think?” As a result someone may lay down the law and keep some things in the home out of bounds for others, even a sink in a certain bathroom.

In the song the person who has a higher standard has to get tougher, and rougher, with their “little false friend” who “constantly lies” and tries to mess them up “with little negative thoughts.” A scenario emerges that the person who washed their face in the wrong sink may have denied that they did this. But the ring around the basin was the telltale sign. That ring around the basin was not left by the person whose sink this is, and whose habits of sink sanitation are spotless. The “injection of truth” is the conclusion that “you washed your face in my sink.”

The Juno Award in March 1992 for the 1992 Rap Recording of the Year went to “My Definition of a Boombastic Jazz Style” which was the second single release from And Now the Legacy Begins. “My Definition of a Bombastic Jazz Style” sampled a 1962 single released by Quincy Jones titled “Soul Bossa Nova”. Then in 1992, the Dream Warriors were asked to make a record of “Man Smart, Woman Smarter” a 1936 song by calypso star King Radio. The song was initially made popular in North America by Harry Belafonte on his 1959 album Belafonte at Carnegie Hall. The Dream Warriors cover was used in the film Buffy the Vampire Slayer.

Canadian Bands.com notes that the duo made a final record in 2002 titled The Legacy Continues. In an interview with Christian Pierce of the Toronto Star in 2011, King Lou (Louie Robinson) reflected on Dream Warriors and what he’s been doing since that project ended. “I’ve done a lot of ghostwriting, and I’ve done a lot of publishing . . . And I’ve been doing a lot of charity work, but not necessarily always in Canada. I’ll do things in the prisons. I won’t go to the media and tell them that’s where I’m going. I do my thing like that.” In February, 2011, the Dream Warriors were one of a number of recording acts to perform at the Horseshoe Tavern in Toronto for a night billed as “’90s Throwback!”: Juno Awards’ 40th Anniversary Concert Series.