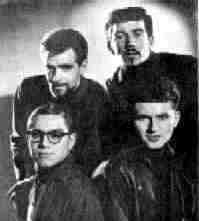 Peak Month: May 1965
9 weeks on CFUN’s Vancouver Charts
Peak Position ~ #4
Peak Position on Billboard Hot 100 ~ did not chart
YouTube.com: “The Way You Fell”

In 1959 Guy Sobell became a member of a Vancouver band called The Ken Clark Trio. They drew inspiration from The Shadows, The Beatles and Sweden’s instrumental group the Spotnicks. For the first few years the trio subsisted by playing at frat parties at the University of British Columbia. In 1962 Sobell decided to form a new band. Among the musicians responding to an ad was Terry Jacks, who was 17 years old and studying architecture and a member of a band called The Sand Dwellers. Jacks band had released a single called “Build Your Castle Higher”. Written along with bandmade John Crowe, it was Jacks’ first recording. It was covered by Jerry Cole and His Spacemen as a track on their debut album, Outer Limits. The track was retitled “Midnight Surfer” and Jerry Cole went on to be part of Phil Spector’s group of now legendary session musicians called the Wrecking Crew who played on over 40 #1 hits in the USA. Prior to His Spacemen band, Jerry Cole was a member of the instrumental group The Champs who had a #1 hit in 1958 called “Tequila”. I don’t know if The Sand Dwellers got any royalties from Jerry Cole and His Spacemen.

In addition to Terry Jacks, there was bass player Bill Lockie and Erik Kalaidzis who was the bands singer. Kalaidzis played chess with Guy Sobell and so they were inspired to call their band The Chessmen. By the time Kenny Moore became the bands’ drummer, Kalaidzis had left the band and Terry Jacks became the lead vocalist. To begin with the band played at UBC fraternity houses for $40 a night. They played coffee houses in greater Vancouver and in 1964 released a double-sided instrumental 45 called “Meadowlands” b/w “Mustang“. Why don’t you just grow up just a little?
Don’t you know that with love you can never fiddle?
You’ve had your day, there’ll be no more play.
I know he’s hurting the way you fell for him.

It’s kind of funny, but I guess it’s sad,
to love somebody when they hurt you so bad.

Gotta go now, too bad, there’ll be sorrow.
You’ll be crying when the sun comes out tomorrow.
You’ve had your day, there’ll be no more play.
I know he’s hurting the way you fell for him.

“The Way You Fell” was a song about a romance that results in hurt feelings. It peaked at #4 in Vancouver. The song invited listeners to consider how it feels to be dumped by someone you fall in love with. It is sung from the perspective of someone who was rebuffed by the person who is the subject of the song. In “The Way You Fell” the subject of the song is hurting because the person they fell in love with doesn’t love them or want to hold them. Since the person singing the song is driving home the point about how much it hurts to love someone who doesn’t love you back, the message cuts two ways. On the one hand, it can be understood as an appeal for empathy and how two people who’ve fallen in love with someone share the experience of what it is like to love and lose. On the other hand, the song can be understood as a preaching to the person to never fiddle with love. Or even to suggest that they had it coming to them: “you’ve had your day” and “gotta go now, too bad, there’ll be sorrow.” In the latter line, the singer already knows what sorrow is, and they seem rather offhand in predicting  the sorrow that will now unfold for their former heartthrob.

At a Brenda Lee show at The Cave in Vancouver, Terry Jacks got acquainted Brenda and her manager, Dub Allbritten. Soon after Dub expressed an interest in being the manager of The Chessmen. They agreed, and Allbritten got them a record contract with Mercury Records in the USA. On September 24 and 25, 1965, The Chessmen played two shows at the PNE (Pacific National Exhibition) along with The Castaways, Charlie Rich and The Beach Boys. The Castaways were from Minneapolis, Minnesota, had a song called “Liar Liar” that peaked that October at #4 in Vancouver and #12 in the USA. The Beach Boys were fresh off their August Top 3 hit, “California Girls”. It was the fourth single to reach the Top Ten in Vancouver. “Do You Wanna Dance” peaked at #11, while “Help Me Rhonda” peaked at #2, “Dance, Dance, Dance” and “Warmth of the Sun” each peaked at #6. On November 5, 1965, The Chessmen were the opening act for Buddy Knox. Then on November 28th, The Chessmen opened a concert at the Queen Elizabeth Theatre with Roy Orbison as the headliner. The Chessmen’s concert appearances ended the year as openers for Gary Lewis and the Playboys on December 29, of “This Diamond Ring” fame. The concert seemed to help the headliners as their hit, “She’s Just My Style”, spent the first two weeks on January 1966 at #2 on both CFUN and CKLG’s weekly record surveys.

The Chessmen travelled to Nashville and cut several more singles. “Love Didn’t Die” and “What’s Causing This Sensation” both charted well in Vancouver. But in July 1966, the band dissolved. After the band split, Terry Jacks was asked in a 1966 Chatelaine Magazine interview if success had changed The Chessmen in any way. Jacks replied, “No, we all still eat raw eggs for breakfast!”

Terry Jacks went on to form The Poppy Family with Susan Jacks, his new wife who he met at a taping of Let’s Go. The Poppy Family had numbers of hit records in Vancouver and internationally, as well as solo releases by Susan Jacks and Terry Jacks. The latter’s biggest hit was “Seasons In The Sun” in 1974. He would go on to produce records for other recording artists including Nana Mouskouri, Valdy, George Jones and Buddy Knox. Jacks remarried and moved to Haida Gwai on the northwestern coast of British Columbia. He has worked on a number of environmental films over the years. In 2016 he suffered two strokes.

Guy Sobell went on to be a producer and married recording artist Denice McCann. He also produced, arranged and played guitar on an album titled Snakebite by Canadian recording artist, Mya, in 1975.

Canadian Bands.com comments that in 2009 Regenerator Records released a best of collection of The Chessmen.