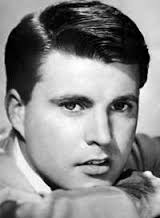 In 1940 Eric Hilliard Nelson was born. On February 20, 1949, while still eight years old, he took the stage name of Ricky Nelson when appearing on the radio program, The Adventures of Ozzie and Harriet. A child actor, Ricky was also a musician and singer-songwriter. who starred alongside his family in the long-running television series, The Adventures of Ozzie and Harriet (1952–66), as well as co-starring alongside John Wayne and Dean Martin in the western Rio Bravo (1959). He placed 53 songs on the Billboard singles charts between 1957 and 1973. In 1958 he had his first #1 song on the Billboard Hot 100, “Poor Little Fool“, which peaked at #2 in Vancouver. When he turned 21 years old on May 8, 1961, he changed his stage name from Ricky Nelson to Rick Nelson.

Nelson racked up a number of #1 hits in Vancouver, including “My Bucket’s Got A Hole In It” in 1958, the double-sided disc with “It’s Late” and “Never Be Anyone Else But You” in 1959, and the double-sided hit “Travelin’ Man” and “Hello Mary Lou” in 1961. Other hits at the pinnacle of his singing career included “Lonesome Town,” “Be-Bop Baby” and “It’s Up To You”. With his weekly appearance on The Adventures of Ozzie and Harriet, Nelson was the first pop singer in the rock ‘n roll era to use a TV show as a platform to promote his single releases. Between 1957 and 1963 only Elvis Presley and Pat Boone had more Top 40 hits on the Billboard Hot 100 then Ricky Nelson. Nelson also appeared in a movie with John Wayne titled Rio Bravo in 1959. In 1960, he starred opposite Jack Lemmon in The Wackiest Ship in the Navy.

In Vancouver the recording artists with the most Top Ten hits between 1957 and 1963 were 1) Elvis Presley (40) , 2) Pat Boone (18) , 3) Ricky Nelson (16), Connie Francis (15) and the Everly Brothers (14). But this was about to change with Beatles three appearances on the Ed Sullivan Show in February, 1964. Despite changing his name from Ricky to Rick, by the time the British Invasion began, Rick Nelson was becoming part of a past. Nelson, with his Ozzie and Harriet show just wasn’t in synch with the new happening sounds from the UK, the surfin’ sound, Motown, Folk Rock or garage-punk rock heard by The Kingsmen, Sam The Sham & The Pharaohs and others.

During the British Invasion Nelson was off almost entirely off the radar of most radio stations. Rick Nelson co-starred with his spouse, Kristin Nelson, in the 1965 film Love And Kisses. The film begins with the day Buzzy Pringle (Rick Nelson) graduates from high school and secretly marries his girlfriend Rosemary (Kristin Nelson). The pair met at school and she still has another year of school to complete since she failed French. Buzzy’s family are horrified on hearing the news of their wedding, especially as Buzzy, unable to care for Rosemary, suggests that for the time being he and his wife live in his old room in the Pringles’ suburban home. At first Buzzy’s parents suspect that Rosemary must be pregnant, but it soon turns out that neither of them has had sex before. Buzzy’s father has have a man-to-man talk with his son on the Buzzy and Rosemary’s wedding night and to tell him all there is to know about the birds and the bees. The newlyweds’ first marital crisis arises after only a few weeks when Rosemary, while her husband is away doing a summer job at the company his father works for, attempts to be a housewife but in fact lacks the necessary skills. The situation escalates when Buzzy finds out that it is his father rather than the company who is paying him. His confidence is temporarily shattered, but Buzzy quickly recovers and eventually is able to make some important decisions. He finds a real job and rents a small apartment and in the end is reunited with Rosemary.

Nelson released two singles from Love and Kisses, directed by Ozzie Nelson. These were “Come Out Dancing” and “Love And Kisses”. Neither made the Billboard Hot 100, even though Nelson appeared on both Hollywood A Go-Go and Shindig to promoted the tunes.

By the summer of 1966, Rick Nelson began to move towards country music, becoming a pioneer in the country-rock genre. He was one of the early influences of the so-called “California Sound” (which would include Jackson Browne, Linda Ronstadt and the Eagles). Your Kind of Lovin’ was released in January 1966 pre-dating this shift to country. It was featured on a 1966 episode of The Adventures of Ozzie and Harriet in that shows final season. “Your Kind Of Lovin'” had an upbeat pop sound with a generous use of horns, a musical cousin of the sound the Righteous Brothers were recording in the mid-60’s. While “Your Kind Of Lovin'”  failed to chart in the USA, it peaked at #8 in Vancouver. I don’t have to tell you what’s on my mind,
’cause baby you know we’re two of a kind.
You’ve got something I want,
and I want it so bad.
Come on, come on, give me all the lovin’ you have.
Give your love to me, now!

Girl it’s time that you start shying away.
Stop listening to what the others all say.
What I’m feeling, I know you’re feeling it too.
And all the love I got belongs to you.

Girl, you’re out of sight,
we’ll do it up right,
let me hold you tonight,
ah, tonight’s the night.

“Your Kind Of Lovin'” is a song conveying the guys feelings about how right the relationship is with the “girl” in his life. He is concerned that she is “shying away” and “listening to what the others all say” (about him). It seems he has a reputation, not all of it good. He’s pretty certain that she knows what’s on his mind and he repeats a demand a couple of times: “give your love to me, now.” In 1993 the Culture Beat had an international hit with “Mr. Vain“. That song’ lyrics include this refrain: “Call him Mr Raider, call him Mr Wrong, call him Mr Vain/Call him Mr Raider, call him Mr Wrong, call him insane/He’d say : I know what I want, and I want it now.” In a similar vein, “Your Kind Of Lovin'” is focused on getting what he wants now: “You’ve got something I want, and I want it so bad./Come on, come on, give me all the lovin’ you have.” Since she’s shying away and not seeming to give her love to him as promptly as he wants it, despite his wanting it so bad, she may not be as keen as him. The main message in the song is that she turns him on.

In 1967 Vancouver’s premiere supper club was The Cave. Opened in 1938 at 626 Hornby Street, patrons could enjoy a delicious dinner between 5:30 p.m. and 7:30 p.m. A menu at the time offered a choice of appetizers: crab meat cocktail or fruit cocktail, followed by “daily soup” or tomato juice. Entree options included fried filet of sole, roast sirloin of beef, grilled pork chops, filet mignon, fried half spring chicken and roast duckling. With each of these dishes came carrots and peas, and mashed potatoes. And for dessert: jello with whipped cream and milk. At the start of 1967, The Cave printed a poster featuring an upcoming booking with “Mister Entertainment,” Wayne Newton. On the bottom of the poster was the following notice: “Opening Wed. Feb. 15th for 10 days only Ricky Nelson.” Though Nelson had changed credits on his records in 1961 from Ricky to Rick, in 1967 The Cave (and likely other venues) were still billing him as “Ricky.”

Rick Nelson had one more song reach the Top Ten in Vancouver and in the USA. That 1972 hit, “Garden Party“, was about being booed off stage at Madison Square Gardens in New York City on October 15, 1971, for playing a number of songs that weren’t among his oldies hits, aside from “Hello, Mary Lou”. On September 5, 1976, Rick Nelson and the Stone Canyon Band performed in concert at the Pacific Coliseum.

In 1985 Rick Nelson put the “y” back in his first name and billed himself again as Ricky Nelson. He went on a tour with Fats Domino on a “comeback tour.” The tour was short-circuited when Nelson’s plane crashed on December 31, 1985, He and six other occupants in the plane were killed, though the two co-pilots survived the crash.