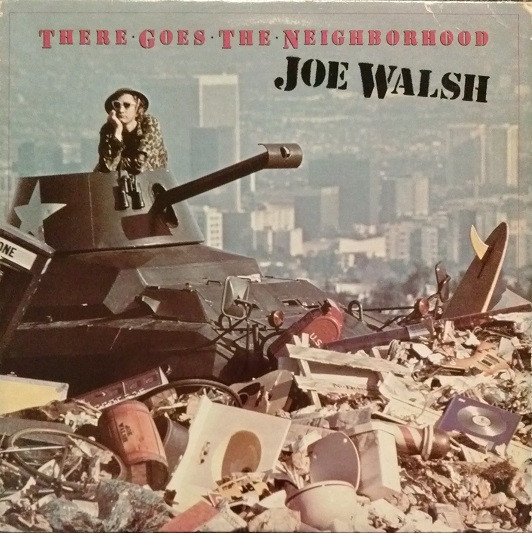 Joe Walsh was born in Wichita, Kansas, in 1947. He got a guitar at age ten in 1957. When he heard the Ventures “Walk Don’t Run” in 1960, he dreamed of a life as a musician. He was part of several groups in the Sixties. One of these, The Measles, were a band of Kent State University students. Two tracks on the Ohio Express’ 1967 Beg Borrow and Steal album, “I Find I Think Of You” and “And It’s True” (both featuring Joe Walsh vocals) were actually recorded by the Measles, led by Walsh. He studied English and music at Kent State College in Ohio. Walsh was present when the Kent State massacre happened in 1970. In 2012, Walsh said “Being at the shootings really affected me profoundly. I decided that maybe I don’t need a degree that bad.”

Joe Walsh became part of the James Gang in 1968. He was the lead vocalist and lead guitar on the band’s debut album, Yer’ Album. It included a cover of “Bluebird” by Buffalo Springfield. A followup album, James Gang Rides Again, was released in 1970. And in 1971, the single “Walk Away” was a hit from the album Thirds. A live concert at Carnegie Hall on May 15, 1971, was recorded as a Live in Concert album. The James Gang opened a concert for The Who in Pittsburgh, and Walsh was invited by Peter Townsend to join The Who as a backing musician on their European tour. Joe Walsh had an impact on the musical direction for The Who’s 1971 album Who’s Next. Walsh subsequently left the James Gang in December 1971.

In 1972, Joe Walsh formed a band called Barnstorm, which released a self-titled album. Next, Walsh released a studio album titled The Smoker You Drink, the Player You Get. From the album came a Top 30 single, “Rocky Mountain Way“. On April 24, 1975, Joe Walsh performed in concert at the PNE Garden Auditorium in Vancouver.

Later in 1975, Joe Walsh was invited by Don Henley to join the Eagles. Walsh was with the band when they released the album Hotel California. The hits from the album included “Hotel California”, “Life In the Fast Lane” and “New Kid In Town”.

In 1977, the Eagles released The Long Run. The title track, “Heartache Tonight” and “I Can’t Tell You Why” were all Top Ten hits. In 1978, Walsh recorded “Life’s Been Good” for the film FM. The single climbed to #12 on the Billboard Hot 100, and #3 in Vancouver. The single was a track on the album But Seriously Folks. Subsequently, Joe Walsh released a greatest hits album.

After the Eagles broke up in 1980, Joe Walsh pursued a solo career. He released There Goes the Neighborhood. The debut single was “A Life Of Illusion”. 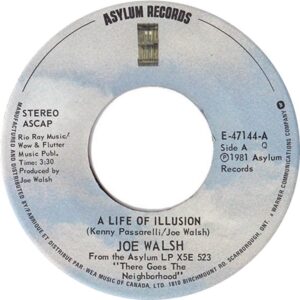 “A Life Of Illusion” is a song about being confused about what is going on around you, and being blindsided by new information – such as changes in nature. The endless routines filled with trying to solve problems are put in perspective as the scales fall from your eyes. With all of life’s confusion, the singer is “backed up against a wall.”

In 1983, Joe Walsh had a minor hit with “Space Age Whiz Kids”, which failed to crack the Top 5o on the Billboard Hot 100. The album, You Bought It, You Name It, also received mediocre sales. In 1985, Walsh released his seventh album, The Confessor. The title track failed to chart. Though Walsh went back to the studio album again and again, his next three albums in the late 80s into the early 90s failed to catch on beyond his hard core base.

However, in 2012, after a 21-year absence in the studio, Joe Walsh released Analog Man. The album peaked at #12 on the Billboard 200 album chart. The album was co-produced by Jeff Lynne (of the Electric Light Orchestra) and included Ringo Starr as one of the musicians.

On September 7, 2012, Joe Walsh gave a concert at the Red Robinson Show Theatre in the Vancouver suburb of Coquitlam (BC). Joe Walsh appeared in concert in Vancouver in 2013 at the Rogers Arena on March 27th.

Outside of his music career, Walsh ran for President of the United States in 1980, promising to make “Life’s Been Good” the new national anthem if he won, and ran on a platform of “Free Gas For Everyone”. In 1992, Joe Walsh ran for vice president with Rev. Goat Carson under the slogan “We Want Our Money Back!”

One response to “A Life Of Illusion by Joe Walsh”