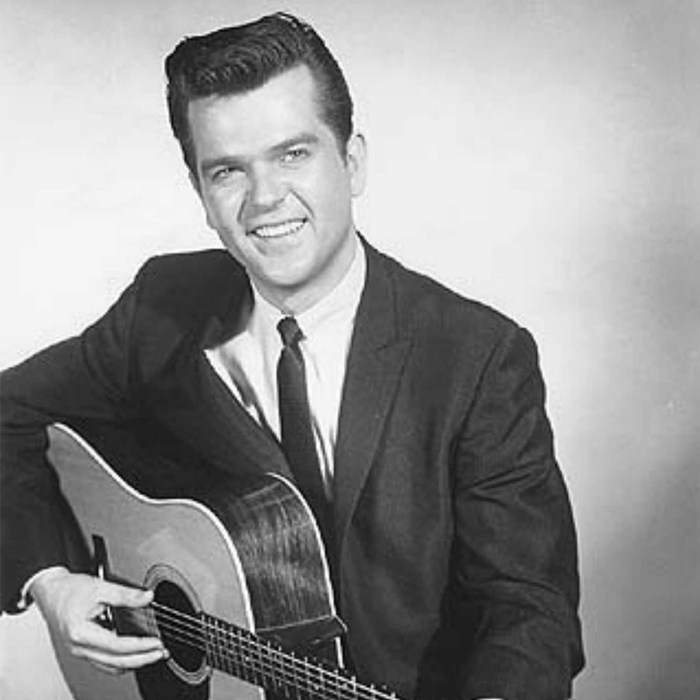 #1330: A Million Teardrops by Conway Twitty

Conway Twitty was an American Country and Western singer with three crossover pop hits on the US charts and five crossover hits on the pop charts in Vancouver. He went on to chart 58 songs in the Canadian Country charts between 1968 and 1990 (61 songs on US Country & Western charts). Born Harold Lloyd Jenkins, in 1957 he decided his real name didn’t have the right stuff for the music business and becoming a star. He looked on a map and finding Conway, Arkansas and Twitty, Texas, he put the two towns names together and became Conway Twitty. From his initial #1 hit in 1958, “It’s Only Make Believe”, 25 year old Conway Twitty became known for his blend of country, rockabilly and rock n’ roll.

Born Harold Lloyd Jenkins on September 1, 1933 in rural Friars Point, Mississippi, the boy had uncommon abilities and a penchant for helping those around him. Given his first guitar, a Sears & Roebuck acoustic, at the age of four, Harold demonstrated a musical gift. He formed his first band, the Phillips County Ramblers when he was 10 after the family had moved to Helena, Arkansas. His mother was the breadwinner and his father found spotty work as a Mississippi riverboat pilot. Harold obtained employment as a carhop and used his earnings to buy clothes and shoes for his brother and sister.

When one of a group of friends horsing around in a local cemetery was pinned under a fallen tombstone, young Harold started to flee with the rest of the frightened pack of boys. He stopped short, however, returning to assist his friend and lifting the stone enough for the boy to scramble free. When the full group returned the next day to reset the stone, they marveled at the feat, as the entire group of them were unable to lift it.

He landed a weekly radio show, and in his other passion, baseball, developed his skills to the point of playing semi-pro and being offered a contract by the Philadelphia Phillies after high school. Jenkins figured his destiny was decided when he was drafted by the Philadelphia Phillies. Fate intervened, however, when he was drafted by a much bigger team — the U.S. Army. While stationed in Japan, he kept both his dreams alive by forming a band and playing on the local Army baseball team. The band was called the “Cimmarons” and played at different clubs. After his release from the army it was the mid 1950s and the sudden popularity of a young man named Elvis Presley drew a still very young Harold Jenkins to Memphis.

While recording at Sun Studios with Presley, Johnny Cash, Carl Perkins and Jerry Lee Lewis, Jenkins began developing a sound that would lead to a record deal with MGM. He also took a stage name, contracting the names of two cities: Conway, Arkansas and Twitty, Texas. In 1958, Conway Twitty scored his first No. 1 hit titled “It’s Only Make Believe”.

His career as a rock-n-roll act took off, with the single topping the chart in 22 different countries and going on to sell eight million copies. Despite making a name for himself as a rock n roller, Twitty had always loved country music. In fact, his reverence for the genre and its seasoned performers factored into his decision to become a rock n roll performer. Twitty also enjoyed a short-lived movie career, appearing in films like Sex Kittens Go To College (with Mamie Van Doren), Platinum High School (Mickey Rooney), and College Confidential (Steve Allen) and writing the title and sound track songs for the films. A play and movie was created titled “Bye Bye Birdie” which was a story about a young rock-n-roll star. It was written with the idea that Conway would do the starring role. The lead character’s name, Conrad Birdie, was created specifically with Conway in mind. Conway did a lot of soul searching and decided that theatre and the movies were not for him, so he turned down the offer and remained focused on his true love of music.

At first, rock n roll seemed to be a place where Twitty and his raw talent could thrive. Through his early recording and touring Twitty got to know a fair number of country stars, eventually abandoning his insecurities so he could “compete with my heroes.”

Before his career in rock ‘n roll had faded Conway Twitty retained a lot of fans in Vancouver. He actually did better on the local pop charts than in the USA. After 1959-60 with “Lonely Blue Boy” Twitty had six singles in the local Top 20 in Vancouver, while none reached the Top 20 on the Billboard Hot 100. One of these was “A Million Teardrops”. “A Million Teardrops” was written by Fred Carter Jr. Born in Louisiana in 1933, Fred Carter Jr. began to play the mandolin at the age of three, and later took up the fiddle. He entered  the United States Air Force in his late teens. He became the band leader for the USO variety show entertaining troops across Europe. His bunkmate during the tour was the MC and fellow serviceman Larry Hagman, who went on to television fame starring in I Dream of Jeannie. Carter landed a spot on the Louisiana Hayride in the mid-50s. Over the years he was a session musician on a number of hit records including “El Paso” for Marty Robbins; “Lay Lady Lay” for Bob Dylan; And “The Boxer” for Simon and Garfunkel. He also wrote songs that were recorded by Bob Luman, Burl Ives, Sonny James, Dean Martin, Sanford Clark, Eddie Cochran and others.

“A Million Teardrops” is a song concerning pride as an obstacle to love between two people. One consequence of pride is seen as the choice to turn away from your partner when you see they are in pain.   Choosing to express love and compassion may also involve recognizing how one’s own actions have contributed to the pain and the hurt. The teardrops shed when one person in a relationship is in pain, can, if witnessed with care, water a garden of love and help it grow.

Shedding tears has been credited with helping to release emotions, build community, evoke empathy in others, lowers stress and elevates the mood. Having a good cry because your needs aren’t being met can actually help you feel better. And it can help others recognize that they’ve had an effect on you, giving them information and a chance to change their behavior.

On the other hand non-stop crying may be a warning sign. Jenn Scalia in her article “10 Signs Your Relationship is Sucking the Life Out of You,” describes the following scenario: “You Cry. Uncontrollably. For no reason. You just do. It’s not necessarily that your partner makes you cry, but the feelings precipitated from the actions and inactions, words spoken or unspoken that make you feel like total poop. I’m not against crying. I’m not against letting tears flow when you feel angry, hurt, disappointed or heartbroken, but when it’s an every day occurrence, you have to ask yourself why? When crying turns into extreme anxiety, your puffy eyes become a permanent accessory and your boss finds you crying hysterically in your car, then it might be time to call it (the relationship) quits.”

Conway Twitty’s second to last single to reach the Top 20 was on CFUN was with “Comfy ‘N Cozy”, written by Otis Blackwell. His final single on the Vancouver pop charts was “Platinum High School“, written by Conway Twitty.

By 1964, after eight years of playing sock hops and dance clubs, Twitty heard the ticking of an internal clock that seemed to guide all the major decisions in his life. One night on a stage in Summer’s Point, New Jersey, Twitty looked out at a room full of people he didn’t know. With a wife and three kids at home, he realized his days of providing background music for sweaty teens were over. Twitty put down his guitar, walked off the stage and embarked on one of the greatest country careers in history.

In 1965 Twitty was signed by producer Owen Bradley to MCA/Decca. Twitty released several singles before 1968’s “Next In Line” became his first #1 on Billboard Country music charts. Between 1968 and 1990 Conway Twitty scored 65 Top Ten hits on the US Country charts, including over 40 at #1. He died while he was on tour at the age of 59 in 1993.