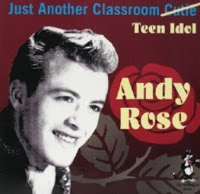 In 2011 there was a 31-track volume from Cat King Kole Records covering recordings by Andy Rose. He was a Paul Anka-like vocalist whose lone claim to fame was “Just Young”, a song that peaked at #69 on the Billboard Hot 100 in October 1958. A version of “Just Young” by Paul Anka charted at #80 during the same month. This was Andy’s only record to chart on the Billboard Hot 100. On the Cashbox Magazine charts “Just Young” listed both Andy Rose and Paul Anka’s recorded versions together and the song climbed to #28. In Vancouver the song peaked at #16 on CKWX and Andy Rose had some local fans. The B-side of “Just Young” was a rockabilly tune called “Love-A-Lov-A-Love” with a clear influence from the phrasing in Buddy Holly’s songs. However, Andy Rose was born Andrew Gattuso in Brooklyn, New York. His mother was an Italian immigrant from Sicily. Andy Rose has only one child a daughter. Andy had two brothers, Roger and Sal, and one sister.

Rose was signed with Aamco Records, a tiny New York label owned by Carl LeBow at 204 West 49th Street in Manhattan. It was formed on May 19, 1958. It was more of an album outlet during their existence focusing on Carribbean and Calypso music. In fact they only issued four singles, all in 1958, two of which were by Rose. The follow-up “My Devotion (The Promise)”/ “Classroom Cutie” on Aamco did not chart. There were always financial problems and little ability to promote the single releases of Andy Rose. By June 18, 1959, Aamco Records filed for Chapter XI bankruptcy.

Andy Rose’s modest success with Aamco, especially for a label with limited promotional funds, led to interest from the much larger Decca subsidiary, Coral. They signed him in 1959. But despite releasing 10 singles between 1959 and 1962, and with all their promotional clout, Andy Rose could never nudge himself back into the Billboard Hot 100. All the following singles failed to crack the Billboard Hot 100. They were released in the following order: ”I’m Waiting For You” and “With Feelings” (1959); “Lifetime Of Happiness” and “A Rose And A Thorn” (1960), “I’m Right Behind You”, “This Is The Nite”, “You Weren’t There” and “I Was The One” (1961), “Same Old Orange Peels (On The Tabbi)” and “Being Young” (1962).

Of these hits his third release on Coral was “A Rose And A Thorn”. The song is an allegorical tale about the dangers of falling in love with someone and not addressing relationship problems. A boy falls in love with a girl. Then he suddenly leaves her with no explanation. Later on, he meets another girl and falls head over heals “in love”  with her. After awhile his new girlfriend leaves him without any warning or explanation. For listeners who had dated anyone who would rather flee a relationship then address emergent seeds of conflict, it was a cautionary tale.

Andy Rose began the song with the opening sentence with spoken word: “This is the story of the rose and a thorn.”

The lyrics to the tale he sings are as follows:

A-well along time ago a little girl loved a boy.
And it filled her heart with so much joy.
And one day he left her, didn’t tell her good bye.
Broke the little girls heart, made the poor little girl cry.

And a rose was a born, from the tears that fell.
All heavens cried with her, that’s the story they tell.
When you see rainbows after a storm.
You know a love has died, a little girl cried, and a rose was born.

Well time moves along. The little boy met a girl.
She captured his heart and set him in a whirl.
Then one day she left him, didn’t tell him good bye.
Broke the little boy’s heart, made the poor little boy cry.

That’s the story of the rose and the thorn. Country stars Webb Pierce and Bobby Lord both recorded “A Rose And A Thorn” in 1961. “A Rose And A Thorn” was written by Wayne Paul Walker. He was a country and rock-a-billy singer and songwriter, born in 1925 in Quapaw, Oklahoma. He wrote “Are You Sincere”, a #3 pop hit for Andy Williams in 1958. Walker’s first big hit record was “I’ve Got A New Heartache”, a #2 country hit in 1956 for Ray Price. “All The Time”, a recording by Jack Greene in 1967, became the only number-one country song Walker penned. He was inducted into the Nashville Songwriters Hall of Fame in 1975. Walker died in 1979, at the age of 54.

The metaphor of roses and thorns have been favorites of a number of recording artists over the rock n’ roll era. In 1961, Joe Dowell’s “The Thorn and the Rose” told listeners he could look at the rose but couldn’t touch because the thorn was in the way. Country singer, Jeannie C. Riley, sang “Roses and Thorns” about a man named Jacob Thorn and a woman named Rebecca Rose. The Thorn and Rose families are neighbors. As these families had a longstanding animosity over a fence line that they share, they never spoke to one another. In folk singer Eliza Gilkyson’s “The Red Rose and the Thorn”, she sings about a member of the audience at a concert who throws a red rose and a thorn from the balcony at the end of the final encore. Hard rock group, Poison, charted a single in 1988 called “Every Rose Has It’s Thorn”. A couple struggles for words to say at a difficult moment in their relationship. There words are thorns despite the rose that is their relationship. When the words end up hurting they can be a catalyst for the relationships’ demise.

For centuries the metaphor of the rose and the thorn has been present in English song lyrics. One of the most enduring examples is the Scottish folk song, “Barbara Allen”. The folk tune goes back to at least the 1660’s. It tells a tale of Barbara Allen who visits the bedside of a heartbroken young man, who pleads for her love. She refuses, claiming that he had slighted her at a prior affair. He dies shortly after. Barbara Allen later hears his funeral bells tolling. Stricken with grief for the part she plays in his dying of grief over his loss of her affections, she dies as well. In the final verse a rose grows up and a brier too. They become entwined as a sign of their enduring love.

In 1964 Andy Rose tried twice more to release singles with different record labels hoping for a break. He released “Everybody But You” on Ember Records and next released “Hey Scooter” on Golden Crest Records. On his last single release he was billed as Andy Rose & The Thorns. But the songs were commercial failures. A final effort was recorded as a duo named Andy & Gino. Their song, “Love Is Love” included a host of title songs in the lyrics that climbed up the pop charts in 1964. Phrases found in “Love Is Love” included “do you want to know a secret,” “money can’t buy me love,” “a world without love,” “yeah, yeah, yeah, yeah,” “twist and shout,” “I want to hold your hand,” “thank you girl,” “Romeo and Juliet,” “bits and pieces,” “walk on by,” “glad all over” and “chapel of love.” Despite the attempt to build on title song familiarity, “Love Is Love” also failed to chart. That’s the story of Andy Rose and his foundering recording career as a teen idol. The music career of Andy Rose is just a reminder, a sign meant to warn, you won’t necessarily become a chart topper even if you have classic good looks, can sing and write your own songs.

Nonetheless, Andy Rose had several extensive compilations of the songs he recorded between 1958 and 1964. A YouTube.com video comment states that Andy Rose “eventually left the recording industry and started doing local night club singing in the New York area.” At some point he moved from New York to Michigan. In 1995, Andy Rose died of lung cancer. In 2017, a CD became available on iTunes featuring 27 songs by Andy Rose. It was titled A Thorn And A Rose. It features an amazing version by Andy Rose of Elvis Presley‘s “I Was The One”.

3 responses to “A Rose and A Thorn by Andy Rose”