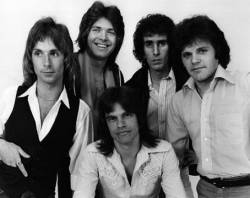 Bill Henderson was born in Vancouver in 1944. He learned guitar and became the guitarist for the Panarama Trio that performed at the Panarama Roof dance club on the 15th Floor of the Hotel Vancouver. He formed the psychedelic pop-rock Vancouver band, The Collectors, in 1966.

The Vancouver rock band The Collectors, was formerly named The Classics who were a Vancouver group led by Howie Vickers in the mid-60s who often appeared on CFUN. The Classics were part of the regular line-up on Let’s Go, a show on CBC TV. Though the Classics released several singles the group needed room to grow and reformed as The Collectors. They would become one of the most innovative of Vancouver’s recording acts through the rest 60s. In the spring of 1967, Vickers was asked to put together a house band at the Torch Cabaret in Vancouver. Along with Claire Lawrence on horns, they recruited guitarist Terry Frewer, drummer Ross Turney and Brian Newcombe on bass. Within a couple of months, fellow Classics member Glenn Miller replaced Newcombe on bass and Bill Henderson, a student at UBC, replaced Frewer on guitars. With Vickers now handling vocals, their sound changed from doing covers of R&B tunes to psychedelic rock. This led them to gigs along the Canadian and US west coast. Their strongest fan base in America was in California.

The Collectors released over a half dozen local hits between 1967 and 1970 – including “Looking At A Baby“, “Fisherwoman”, “Lydia Purple”, and “I Must Have Been Blind“. Bill Henderson (vocals, guitar), Claire Lawrence (saxophone, keyboards), Ross Turney (drums) and Glenn Miller (bass) were all Collectors bandmates.

After Howie Vickers left The Collectors, they changed their name to Chilliwack. The name was a Salish First Nations name that means “going back up” and is the name of a city in the Fraser Valley in British Columbia.

On October 16, 1970, Chilliwack gave a concert in Vancouver at the Pacific Coliseum. This was followed by another concert on December 11, 1970, at the PNE Garden Auditorium. That winter a single titled “Rain-O” peaked at #15 on CKVN in Vancouver after briefly charting for four weeks in December.

Chilliwack appeared in concert in Vancouver on April 28, 1971, at the Pacific Coliseum, and later that year at the Agrodome on August 6, 1971. They had their first Top Ten hit in Vancouver with “Lonesome Mary” in 1971. On March 17, and later that year on July 24, 1974, Chilliwack appeared in concert at the Pacific Coliseum. They released other singles across the decade including “Crazy Talk” in 1975.  On November 10, 1975, Chilliwack gave a concert at the Commodore Ballroom.

After the disappointment of their album, Rockerbox, the band went back to the recording studio and released Dreams, Dreams, Dreams. The debut single from the album was “California Girl”, written by Bill Henderson.

At the time they released “California Girl”, Chilliwack’s band members were all Scientologists, according to Bill Henderson’s liner notes on a 2013 reissue of the album. And in 1977 there was a dedication to the founder of the Church of Scientology, Ron L. Hubbard, on the back of Dreams, Dreams, Dreams. By 1977 the bands musicians consisted of Henderson, Turney, Miller and Howard Froese on guitar, vocals, solina and piano. The album contained more successful singles after the release of “California Girl”. These were “Baby Blue“, “Something Better” and “Fly At Night”.

In June 1978, Chilliwack released the studio album titled Lights From the Valley. The debut single from the album was “Arms Of Mary”. 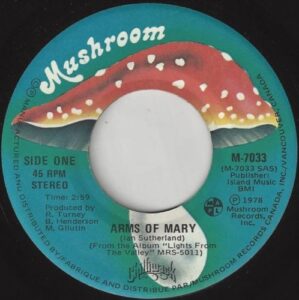 Iain Sutherland wrote “Arms Of Mary” at his family farmhouse in the Stoke-on-Trent village of Stockton Brook. He was a member of the UK band Sutherland Brothers and Quiver. Sutherland recalled, “The stuff about ‘the lights shine down the valley’ [the opening line], I was looking down through Endon basically”, citing the village of Endon situated in the Churnet Valley. The song is about the sexual awakening of a young man, as “Mary was the girl who taught me all I had to know.” Mary turns the pains of growing up into “feel good.”

“Arms Of Mary” climbed to #6 on CFUN in Vancouver, spending 15 weeks in the Top Thirty. The single also climbed into the Top Thirty in Hamilton, Ontario, and the Top 40 in Schenectady, New York. In 1992 Piet Vierman had a minor hit with “Arms Of Mary” on the Dutch pop chart, and in 2015 Willy Sommers had a #15 hit in Belgium with the song.

At the end of 1978 the Chilliwack cracked the Top 20 in Vancouver with “Never Be The Same“. Chilliwack gave a concert at the Pacific Coliseum on December 27, 1978, and returned to perform again at the venue on May 23, 1981. In between these concerts, the band performed at the Queen Elizabeth Theatre on March 4, 1980.

Chilliwack continued to release albums and singles over the next few years. But it was their ninth album, Wanna Be A Star, that definitely made them stars. They charted their only two Top 40 hits on the Billboard Hot 100 with “My Girl (Gone, Gone, Gone)” and “I Believe”. In 1982 Bill Henderson won the Juno Award for Producer of the Year for the Chilliwack album Opus X. The band’s third single release from Opus X was “Secret Information”. In the summer of 1982 Chilliwack had another Top 20 single from Wanna Be A Star in Vancouver titled “(Don’t Wanna) Live For A Living“.

By the time the Opus X album was recorded, Chilliwack was now a trio of Ab Bryant, Bill Henderson and Brian MacLeod. Henderson wrote “Secret Information” and has continued to play in concert. On October 6, 1991, Chilliwack gave a concert at the 86th Street Music Hall in Vancouver. Brian MacLeod died in 1992 of cancer.

In the 2000s Chilliwack was a frequent performer in the Greater Vancouver area. This included dates in Vancouver at the Commodore Ballroom on January 8, 2000, and again on January 11, 2003; The PNE Amphitheatre on August 30, 2008; and the PNE Exhibition Bowl on August 29, 2009. Chilliwack also appeared in the Vancouver suburb of Coquitlam at the Red Robinson Show Theatre on March 27, 2009; And in the suburb of Richmond on May 21st and 22nd, 2010, at the River Rock Casino. They also appeared in the 2000s in White Rock and Surrey.

On August 18, 2018, Chilliwack performed at the Rock Ambleside in West Vancouver. The set included vocals with Bill Henderson’s daughters Camille and Saffron. Chilliwack played at the Cosmo MusicFest & Expo in Richmond (BC) on June 1, 2019. Later that summer they appeared at the Rock The River Festival in Saskatoon, Saskatchewan, the weekend of August 16-18, 2019. Other performers on stage included Blue Oyster Cult, Colin James, Loverboy, Quiet Riot, Streetheart, the Headpins, the Romantics and Honeymoon Suite.

One response to “Arms Of Mary by Chilliwack”