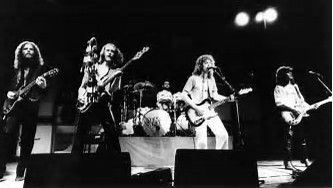 April Wine is a Canadian rock band that has released 34 singles, 16 studio albums and 9 live albums. They formed in Waverly, Nova Scotia, in 1969. The founding members were brothers David Henman (guitar) and Ritchie Henman (drums) and Myles Goodwyn (lead vocals, guitar). The Henman brothers cousin Jim Henman was also part of the band, but was replaced by bass player Jim Clench in 1971, a year after the band moved to Montreal. They had a Top Ten hit nationally in Canada in 1972 with “You Could Have Been A Lady”.

On their fourth album in 1974, Live, the band had another Top Ten hit in Vancouver called “I’m On Fire For You Baby.” Their fourth studio album, Stand Back, went double platinum with 2 million sales. The first single released from the album was “I Wouldn’t Want to Lose Your Love”, which climbed to #12 in Vancouver in early 1975.

A number of changes in the band left Myles Goodwyn as the only founding member. Former Mashmakhan drummer, Jerry Mercer, replaced Ritchie Henman, and Garry Moffat took over from Dave Henman on guitar. Steve Lang took over on bass from Jim Clench. This line-up would record the band’s fifth studio album in 1976, The Whole World’s Goin’ Crazy. This album went platinum before it was released. The band had Top Ten success the following year with “You Won’t Dance With Me”. Another track, “Gimmie Love“, was also a hit on the Vancouver pop charts.

In March 1978, April Wine released their seventh studio album titled First Glance. Off the album the band released four singles, the second of which was “Comin’ Right Down On Top Of Me”. Here is a song about someone who senses the sky itself is falling down on them. They can’t breathe and the point of living eludes them, while their streak of bad luck continues. The singer wonders how things got so bad and, feeling trapped, is left to plead for someone to set them free. What is coming down on this singer in addition to the sky is a sense that their whole life is imploding.

When life is imploding and seems to be ending in ruin it can be very hard to imagine starting over again and moving toward what we want. Fear can be overwhelming and is the first thing we need to get control of if we are to constructively move toward embracing whatever we name as love for ourselves, our daily lives, the people we surround ourselves with, our inspiration for living. If we gather the courage to change our lives for the better, before letting go it is important to be clear what you’re letting go of and why. In order to do this we need to remember the past, think about the mistakes that were made, learn from the experience, get rid of the bad memories and keep the good ones. It’s also helpful to make an inventory about the people you are intimate with. If there’s any unresolved issue, it’s useful to consider a way to resolve it or ask yourself if that relationship should end. Consider letting go of “friends” who might keep you repeating negative patterns in your life which no longer serve you well. Just keep the supportive friendships. Aside from your friends, remember, if you got into a very stuck place in your life where you no longer feel free, come to terms with what you bring to the equation. Who are you? What are you doing right now? Is that what you really want to do? What do you like to do? What are your goals, hopes and dreams? What are your talents or skills? Taking  time to answer these questions can help you check in with the person you’ve become. When life seems complicated and overwhelming, it can be simplified. However, in order to live a simple, stress-free life, it is important to take a look at the person in the mirror. Be clear about who you are and where you stand as you plan your next steps.

In 1981 April Wine had their most successful single, “Just Between You And Me”, which climbed to #21 on the Billboard Hot 100. Meanwhile, the album it was included on, The Nature of the Beast, represented the bands commercial peak. They continued to chart songs into the Top Ten nationally in Canada, notably with “Enough Is Enough” in 1983. Myles Goodwyn published a memoir titled Just Between You And Me.

April Wine has received eleven Juno Award nominations. Yet, they’ve lost out on each occasion to other Canadian performing artists. The band continues to perform and between July and October of 2017 April Wine had 18 tour dates. These included bookings in Illinois, Newfoundland, Prince Edward Island, New Brunswick, Ontario, Saskatchewan and Alberta.