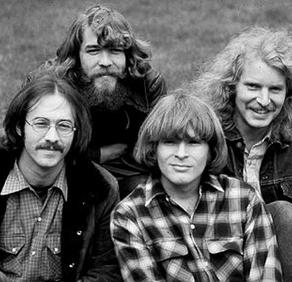 Doug Clifford was born in Palo Alto, California, and learned to play drums in his teens. Thomas Richard Fogerty was born in 1941 in Berkeley, California. In his teens he had a band called Spider Web that included future Seeds guitarist Jimmy Levine. Guitarist, Stu Cook, was also raised in the Bay Area. Their self-titled debut album was released in the summer of 1968. It included a cover of the Dale Hawkins classic from 1957, “Susie Q”. Creedence Clearwater Revival recorded an eight minute version of the song and pitched it to the progressive FM station, KMPX, in San Francisco. The station began to play it prior to the release of the album which created a buzz for CCR all over the Bay Area. They also put a “z”in Suzie, perhaps to designate the artistic uniqueness of their cover of Dale Hawkins rock ‘n roll classic. CCR’s cover made it to #11 on the Billboard Hot 100 and #1 in Vancouver. It may be that CCR were thumbing through the “H” section of rock n’ roll singers when they decided to cover another song by a singer with the surname of Hawkins. Another track of their debut album was “I Put A Spell On You” by Screaming Jay Hawkins.

The next single CCR released was in July 1969 was the title track from their third studio album: “Green River”. The B-side was “Commotion”. 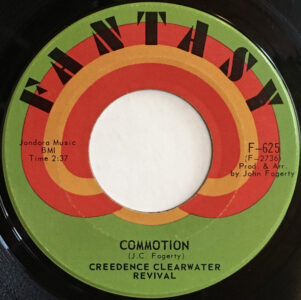 “Commotion” was written by John Fogerty. The first verse is about gridlock in the city: whether on a freeway or in a church parking lot. And the emotional impact of all the traffic is people everywhere frowning. The second verse is about a different kind of commotion: people talking at your door (gossip), and at the White House (politics). Fogerty writes “so much goin’ on I just can’t hear.” And in the third verse the commotion is about the rat race: “Run, run, run, run, run. Rushin’ to the treadmill, rushin’ to get home…”

The “rat-race” is an analogy to the modern city, where many may see citizens, as rats in a single maze, expend a lot of effort running around, ultimately achieving nothing meaningful either collectively or individually. This is often used in reference to work, particularly excessive or competitive work; in general terms, if one works too much, one is “in the rat race”. A key aspect of the rat race is being inflicted on the individual by uncontrollable outside forces such as researchers in the case of literal rats in a laboratory maze, or the inherent logic, pressures and incentives of contemporary businesses and society (e.g. productivity, acceleration, status). This terminology contains implications that many people see work as a seemingly endless pursuit with little reward or purpose (cyclical commute between home and work, akin to a rat running in circles or in a hamster wheel). And in “Commotion” CCR sings about people in this frustration and exhaustion from running around, rushing around, being on a “treadmill.”

In 1956 William H. Whyte published The Organization Man. A central tenet of the book is that average Americans subscribed to a collectivist ethic rather than to the prevailing notion of rugged individualism.  In his book Whyte wrote: “The word collective most of them can’t bring themselves to use—except to describe foreign countries or organizations they don’t work for—but they are keenly aware of how much more deeply beholden they are to organization than were their elders. They are wry about it, to be sure; they talk of the “treadmill,” the “rat race,” of the inability to control one’s direction.”

There is an episode from I Love Lucy  titled “Job Switching” that aired on September 15, 1952, Lucy and Ethel are working in a chocolate factory. They are told by their supervisor “the candy will pass by on this conveyor belt, and continue into the next room where the girls will pack it. Now your job is to take each piece of candy, and wrap it in one of these papers, and put it back on the belt. You understand? All right girls. Now this is your last chance. If one piece of candy gets past you and into the packing room unwrapped, you’re fired.” When the supervisor yells to another employee to “let her roll,” the chocolates start to come out of the conveyor belt. As they come down the belt faster and faster, Lucy and Ethel put the chocolates in their mouths, down their blouses, and off the belt in front of them. Lucy tells Ethel, “I think we’re fighting a losing game.” And in “Commotion”, CCR sings about people who “worry ’bout the time you save, save.”

In her book Simple Living Guide: A Sourcebook for Less Stressful, More Joyful Living, Janet Luhrs advises that we do one thing at a time. She notes that with multitasking “you seemingly get more accomplished but never get engrossed in any one thing….When we try to do two or more things at once, we do none of them well, and we don’t really experience anything. Then we begin to worry. While walking out the door in the morning with our minds already on the job and not on the process of walking out the door, we worry we may have forgotten to lock the door. We worry that we forgot to turn off the oven, because our minds we elsewhere while cooking. We worry we aren’t doing our best at work because we are only putting part of ourselves into our projects.” This is a kind of inner commotion because our minds are not still.

Oliver Wendell Holmes writes “What lies behind us and what lies before us are tiny matters compared to what lies within us.” While author Jack Kornfield writes “Stop and listen to the heart, the wind outside, to one another, to the changing patterns of this mysterious life. It comes moment after moment, out of nothing, and disappears into nothing. Live with less grasping and more appreciation and caring.” Meditation, mindful awareness, doing one thing at a time, doing less things well – these are some of the ways of engaging your daily life to counter having your life be one of constant commotion.

CCR released one more single in 1969, “Down On The Corner”, with the B-side “Fortunate Son”. “Fortunate Son” was a song protesting the hypocrisy involved in the draft. In his autobiography, Fortunate Son: My Life, My Music, John Fogerty recalls, “You’d hear about the son of this senator or that congressman who was given a deferment from the military or a choice position in the military. They seemed privileged and whether they liked it or not, these people were symbolic in the sense that they weren’t being touched by what their parents were doing. They weren’t being affected like the rest of us.” “Fortunate Son”/”Down On The Corner” climbed to #1 in Vancouver. It was the first of four singles to top the charts in Vancouver for CCR.

CCR charted one single after another into the Top Ten. Many of their singles were double-sided hits. Of the 19 songs that charted on the Vancouver pop charts between September 1968 and May 1972, CCR charted 18 into the Top Ten and 17 of these into the top three positions. Nine of the songs made it to #1. In early 1970 CCR had a #2 hit with “Travelin’ Band”/”Who’ll Stop The Rain”. This was followed in the spring of 1970 with “Up Around The Bend”/”Run Through The Jungle”. The latter included comments about the proliferation of guns in America, “200 million guns are loading, Satan cries ‘take aim.'” The double-sided hit climbed to #1. As the single was climbing the pop charts in Vancouver, CCR appeared in concert at the Pacific Coliseum on May 1, 1970. And in September 1970 CCR had another double-sided #1 hit with “Looking Out My Back Door”/”Long As I Can See The Light”.

The band had a final #1 hit in Vancouver in March 1971 with “Have You Ever Seen The Rain”/”Hey Tonight”. And a final appearance in the Top Ten was in August 1971 with “Sweet Hitch Hiker”.