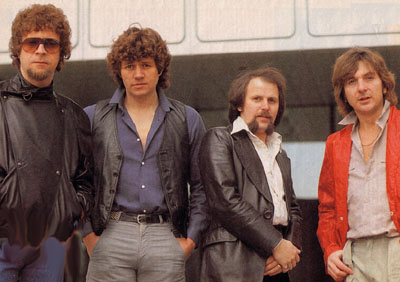 On February 4, 1976, ELO appeared in concert in Vancouver at the Queen Elizabeth Theatre. In the fall of 1976 ELO released A New World Record. In 1977, both singles, “Livin’ Thing” and “Telephone Line”, climbed to #2 in Vancouver. While a third single from the album titled “Do Ya”, stalled at #19. In the fall of ’77, ELO released their seventh studio album titled Out of the Blue. The debut single from the album, “Turn To Stone”, peaked at #2 in Vancouver in early 1978. While the second single release, “Sweet Talking Woman”, peaked in Vancouver at #2.

The next single release from the album was “Confusion”.

“Confusion” was one of the tracks from the ELO Discovery album. It was written by Jeff Lynne. The song is about someone who has lost their love. The catalyst for this is the “cold winds [that] blow across your mind.” The narrator singing about the person he’s broken up with observes “you don’t know what you’re saying.” The perceptions clouding the mind of this confused person are summed up by the line “dark is the road you wander.” In the aftermath of the breakup, the subject of the song is finding it hard to carry on. It seems they felt during the relationship that they had no one to lean on. While for their former romantic partner this was one of the confusing contentions that was driving him wild. “You’ve got to be joking,” could have been a line from an additional verse, if Jeff Lynne had written more.

In “Confusion”, the female subject of the song is in a negative state of mind. This is contrasted with the opening line in the first verse: “Everywhere the sun is shining.” As well, she has a lost look in her eye. Her ex-partner sums up “you’re always out there running.”

In an article in Psychology Today titled “Top 10 Reasons for Relationship Break-Ups,” Barton Goldsmith writes “If you cannot support the one you love when he or she is down, or stressed because of some life event, you are communicating that it’s not worth your time and energy. This makes your loved one feel invalid. If you can’t be there for your other half, and don’t care to change, it’s time to leave. If you want to keep your relationship, learn to be supportive.” In “Confusion” the female partner felt she had no one to lean on. Whatever her perceptions, the bottom line is she didn’t feel supported as some basic level. She may have been playing mind games. She may have been someone who always saw the glass half empty. Nonetheless, the relationship was not meant to be and the couple weren’t a fit.

In 1980 ELO was featured on the soundtrack for the film Xanadu. They were also in the film, along with Olivia Newton-John, Cliff Richard and The Tubes. The film featured the theme song “Xanadu” by ELO with Olivia Newton-John. It climbed to #5 in Vancouver and #8 on the Billboard Hot 100. Two other singles from the film, “All Over The World” and “I’m Alive”, made the Top Ten in Vancouver in 1980.