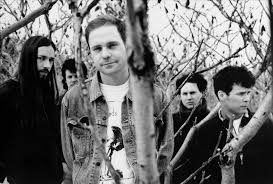 #967: Courage by The Tragically Hip

In 1989 the band released their first studio album, Up To Here. The Tragically Hip proceeded to release five singles from the album: “Blow at High Dough”, “New Orleans Is Sinking”, “Boots Or Hearts”, “38 Years Old” and “Trickle Down.”  The first four of these singles received respectable airplay across Canada. “New Orleans Is Sinking,” a fictional tale, got some airplay on mainstream rock stations in the USA. Of the songs off their first studio album, “Boots Or Hearts” charted the best here in Vancouver.

In 1991 the band released Road Apples which featured the debut single from the album titled “Little Bones”. “Twist My Arm” and “Three Pistols” followed. As part of their Road Apples Tour, the Tragically Hip had a five-night stand at the Commodore Ballroom in Vancouver from July 16th to 20th, 1991. The band subsequently appeared in concert on December 2, 1992, at the PNE Forum. The band performed in Vancouver on July 17, 1993, on Seabird Island.

They released four more studio albums during the 1990’s. One of these, Fully Completely, featured six single releases. “Courage (for Hugh MacLennan)” was the third release from the album. Hugh MacLennan’s take on the important things any of us do, is that they are born of “compulsions so obscure we do not and cannot understand them.” These important things we do include courageous acts. On the face of it, there could be a case to be made that when we act with courage, and are often recognized as a hero for our bravery, it seems we had “the right stuff.” But, MacLennan doubts we can really understand why a given person does the important things they do. It would appear that there are lots of potential obstacles that could get in the way of our ever manifesting the important deeds we do. If MacLennan is correct about the irony of being human, the surprise is that we ever rise to the occasion to do the important things we do. The muck of living gets in our way, stacking the odds against courageous acts and important contributions. In the 1939 film, The Wizard Of Oz, the Wizard commands Dorothy and her friends to bring him the broomstick of the Wicked Witch of the West. At the gates of the witches’ castle, the Cowardly Lion tells the Scarecrow and the Tin Man he’ll go into the castle for Dorothy. There’s only one thing he wants the Scarecrow and Tin Man to promise they’ll do, “talk me out of it.” Despite his cowardice, the Cowardly Lion does summon enough bravery to rescue Dorothy and return her to the Wizard Of Oz with the witches broomstick.

“Courage (for Hugh MacLennan)” was nominated as Single of the Year at the 1994 Juno Awards. It lost to “Fare Thee Well, Love” by The Rankin Family. The song peaked at #10 on the Canadian RPM singles chart and #9 in Vancouver on CKLG.

The Tragically Hip charted 16 songs into the Canadian RPM Top 30, including seven Top Ten hits with “Ahead By A Century” being their first #1 hit in Canada in 1996. They repeated their feat of getting a chart topping single in Canada with “In View” in 2006. Between 1990 and 2017, The Tragically Hip have received sixteen Juno Awards in Canada for a range of honors including Best Single, Best Rock Album and Group of the Year. The songs “Gift Shop” and “Poets” climbed to #4 on the Canadian RPM singles charts in 1996 and 1998. In 1999, the band had a #3 hit across Canada with “Bobcaygeon”. “Courage (for Hugh MacLennan)” was the first of fifteen singles to crack the RPM Top Ten on either the Pop chart or the Canadian Alternative/Rock chart. The final song to crack the Top Ten nationally was in 2016 with “In A World Possessed By The Human Mind”.