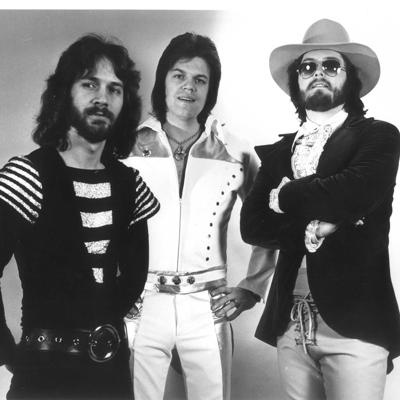 They were originally outfitted with cowboy hats, T-kay denim pants, shirts and jackets and cowboy boots. By the early 70’s the Stampeders kept only cowboy boots as mandatory attire. Their first single as a trio was called “Carry Me.” While the song got some air play in Vancouver, it did not chart here. However, it climbed to #2 nationally. Their cache only increased with the release of their debut album and a #1 hit across Canada called “Sweet City Woman.” It also made the Top Ten in the USA. The band won four Juno Awards for “Best Composer,” “Best Producer,” “Best Single” and “Best Vocal Instrumental Group.”

“Sweet City Woman” fell off the charts in September 1971. Next, the band released their next single titled “Devil You”. 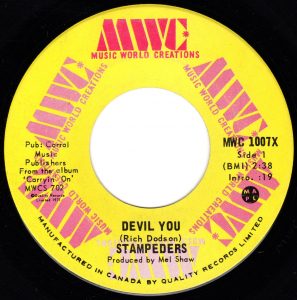 The partner in relationship with “Devil You” warns them “someday you’re gonna burn.” While the partner is “sleeping sound” the Devil is obviously sleeping around. The partner suggests to “Devil You” that they may as well be on their own.

In various cultures and religious traditions, a devil is a personification of evil. A devil is seen as the objectification of a hostile and destructive force. In the case of “Devil You”, the Devil is neglecting a relationship, sleeping around, and interrupting their partners sound sleep. So this might be ‘Devil lite’, since what is being described is annoying behavior, not the personification of evil.

The Devil has found its way into the song titles of numbers of pop songs in the 20th Century. In 1931 Harold Arlen wrote the pop standard “Between The Devil And The Deep Blue Sea”. Arlen’s song was recorded by Cab Calloway, Louis Armstrong, Count Basie, Benny Goodman and others. In it the one partner is fed up with the emotional whiplash in the relationship, yet observes “I should hate you, but I guess I love you.”

In 1961 Neil Sedaka had a number-one hit in Vancouver (BC) with “Little Devil”. In that song the devil was a “mischief maker,” a heart-breaker, and so cute that the guy who’s in love with her is determined to “make an angel out of you.” In 1962 Marty Robbins had a number-one Country hit titled “Devil Woman”. In his song the Devil woman is “evil, like a dark coral reef,” and she won’t let go of him and let the singer return to the woman who he is married to. In 1963 Elvis Presley sang “You’re The Devil In Disguise”, a song about someone who walks talks and looks like an angel, but who cheats and schemes. In 1968 the Rolling Stones song “Sympathy For The Devil” had the Devil himself describing his long history and inviting listeners to guess his name. While the Charlie Daniels Band, in “The Devil Went Down To Georgia”, sings about the Devil losing a fiddling contest with a Georgia boy named Johnny.

On the strength of their success, their UK label, EMI, sponsored a tour to the UK and continental Europe.  While on tour in 1972 they found themselves booked at the same hotel in Amsterdam overlapping with The Eagles. Back in North America, The Stampeders flew to Los Angeles where they performed at the iconic Whisky A-Go-Go, and were guests on the TV shows Don Kirshner’s Rock Concert and The Dating Game. It was in Hollywood that the band met The Who’s drummer, Keith Moon, who invited them to attend his birthday party at the Beverly Hills’ Wiltshire Hotel. In addition The Stampeders toured extensively in the early 70’s and on either side of the Canada-U.S. border found themselves variously sharing the billing with Black Oak Arkansas, Santana, Joe Cocker, Steve Miller, The James Gang, Robin Trower, Steely Dan, Sonny & Cher, The Beach Boys, ZZ Top, The Eagles, Earth, Wind And Fire, Mountain, America, Tower Of Power, Blood, Sweat and Tears and Genesis. The Stampeders also traveled to Brazil to perform at a song festival in Rio in front of 90 million TV viewers.

Among the singles that charted well in Vancouver were “Monday Morning Choo Choo”. The Stampeders next single release was “Wild Eyes“.

In early 1973 the Stampeders released “Oh My Lady“. Another release from The Stampeders third album, “Minstrel Gypsy”, made the Top Ten in many radio markets across Canada, but failed to chart in Vancouver. In 1975 the band released their fifth album featuring the rocker, “Ramona”. Another studio album followed with two covers. One was the old Ray Charles hit, “Hit The Road Jack”, while the other was a former hit for Gary U.S. Bonds, “New Orleans”. The former cover by The Stampeders featured the DJ of American Graffiti fame, Wolfman Jack. The single won The Stampeders another Juno.

But the days were numbered for The Stampeders as a hit-making machine. They had some modest success again in 1976 with several singles off their Hit The Road album. One of these was “Playin’ In The Band”.

After 1976, in most Canadian radio markets the Stampeders were off the radar. The disco onslaught on Top 40 AM radio was pervasive and the Stampeders weren’t doing disco. By degrees the band was breaking up as Rich Dodson left, followed by Kim Berly. They were replaced by numerous other musicians, with King the only original Stampeder. The larger line-up of Stampeders made the cost of touring impractical and the reformed band finally split up in 1980.

References:
The Stampeders – About, Stampeders.net.
Rich Dodson and Ronnie King, “The Stampeders,” Canadian Bands.com.
Raj Halwani, “Immanuel Kant said Sexual Desire is Morally Wrong – he May have Had a Point: The Philosopher Implicitly Acknowledged the Unusual Power of Sexual Urges and their Capacity to Divert us from Doing What is Right,” Scroll.in, December 31, 2016.
Paul Carus, The History of the Devil, (Dover, 2008).
“CKLG ‘Thirty’,” CKLG 730 AM, Vancouver, BC, December 24, 1971.