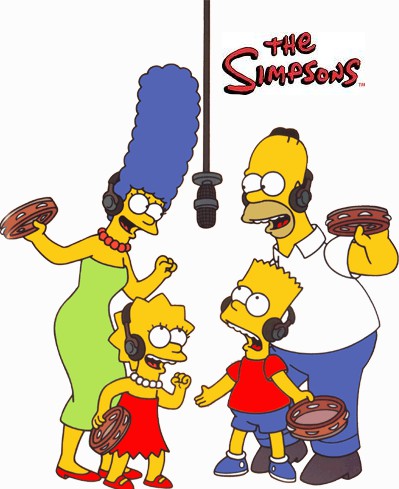 Nancy Jean Cartwright was born in 1957 in Dayton, Ohio. When she was in Grade Four at St. Charles Borromeo school, she won the school’s speech competition when she performed of Rudyard Kipling’s How the Camel Got His Hump. In high school she was part of the Fairmont West High School theater and also the marching band. Cartwright often entered public speaking competitions. During high school she came first in the category for  “Humorous Interpretation” at the National District Tournament two years in a row. It was suggested by judges of the competition that she try performing cartoon voices. After high school she went to Ohio University where she placed fifth in the National Speech Tournament’s exposition category with her speech “The Art of Animation”.

In 1976 Cartwright got a job at WING-AM radio in Dayton, Ohio, doing voice-overs for commercials. She moved to West Hollywood in 1978 and after studies at UCLA got a leading role in the 1982 TV movie Marian Rose White. The next year she got a small part in the feature film Twilight Zone: The Movie.

In the 1980s she did voice-overs in a variety of animation television productions and films. These include Fat Albert, Saturday Supercade, Snorks, Ritchie Rich, Fantastic Max, My Little Pony: The Movie, The Chipmunk Adventure, Pound Puppies and the Legend of Big Paw, Who Framed Roger Rabbit, Little Nemo: Adventures in Slumberland, and The Little Mermaid.

In 1987 Cartwright was invited to do the voice for Lisa Simpson in an adaptation of Matt Groening’s cartoon strip Life in Hell for the The Tracey Ullman Show. However, Cartwright decided that her voice for Bart Simpson was a better fit, given the character, and Groening agreed. The Simpsons’ shorts first appeared on The Tracey Ullman Show on April 19, 1987, featuring Bart in the short “Good Night”.

Nancy Cartwright’s her longest running role began in 1989 when she was hired to do the voices for Bart Simpson and Maggie Simpson, among other voices for The Simpsons. And in 1990, building on the popularity of the TV show, an album was released featuring “Do The Bartman”. 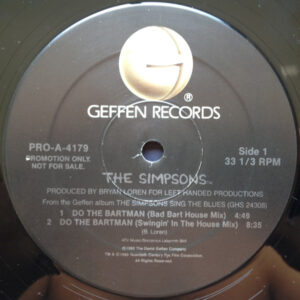 “Do The Bartman” is a track from the album The Simpsons Sing the Blues. The song didn’t appear on any episode of The Simpsons, but was released after the December 6, 1990, episode “Bart the Daredevil”. “Do The Bartman” was written by remixer Bryan Loren and pop singer Michael Jackson. Loren has written songs recorded by Barry White, Whitney Houston, The Brothers Johnson, Michael Jackson, Rick James and Bon Jovi, among others.

Michael Jackson was born in Gary, Indiana, in 1958. Bobby Taylor of Bobby Taylor and the Vancouvers brought the Jackson 5 to Motown in 1968 and in the fall of ’69 the group released “I Want You Back”. The single became their first number-one hit in January 1970. The Jackson 5 had three more number-one hits: “ABC”. “The Love You Save”, and “I’ll Be There”. But in early 1972 Michael Jackson went solo with the release of the album Got To Be There. The title track made the Top Ten on both the Soul and Pop charts in the USA, as did his followup cover of the 1958 Bobby Day hit “Rockin’ Robbin”.

Michael Jackson has been nominated for 35 Grammy Awards, winning 13, and having three of his song and two of his albums inducted into the Grammy Hall of Fame.

Matt Groening, the creator of The Simpsons, including the character Bart Simpson, was born in 1954, in Portland, Oregon. Bart was an anagram for the word brat. Groenings’ comic strip Life in Hell ran from 1977 to 2012. The Simpsons, debuted on December 17, 1989. It is the longest-running U.S. primetime-television series in history and the longest-running U.S. animated series and sitcom. Up until March 2021, at the time when this article was posted, The Simpsons have aired over 700 episodes. Groening told Los Angeles Times Magazine how ironic it was that he made a living from doing what teachers warned him not to do in school: daydream, doodle and draw.

Bart Simpson’s fictional character is the eldest child and only son of Homer and Marge Simpson. Bart’s most prominent and popular character traits are his mischievousness, rebelliousness and disrespect for authority. Examples of his character include chalkboard gags in the opening sequence. Bart makes prank calls to the grouchy, lonely and miserable owner of Moe’s Tavern, Moe Szyslak. He is also known for his catchphrases “Eat my shorts”, “¡Ay, caramba!”, “Don’t have a cow, man!”, and “I’m Bart Simpson. Who the hell are you?”.

Bart shares a sibling rivalry with his younger sister, Lisa, but has a buddy-like relationship with his young infant sister Maggie. While Bart makes mean comments to Lisa, and even fights physically with her, the two are often very close. Bart cares for Lisa very much, and always apologizes for letting things get out of hand. He also believes Lisa to be his superior when it comes to solving problems and frequently asks her for advice.

The Simpsons includes lots of inner thoughts of the parents and the children. Matt Groening got accustomed to giving attention to his own inner thoughts as a child by writing in a diary. From a diary entry when he was 12-years-old, Groening wrote: The Boy Scouts are alright if you don’t have much to do, or you like to pretend to be in the army, and you enjoy saluting the flag alot, but if all your in for is because you like camping or your parents make you go, then there’s not much to say for it . . . Two of Groening’s real sisters are the inspiration for Bart’s sisters on The Simpsons: Lisa and Maggie.

When The Simpsons debuted, Bart was the hit on the show. This resulted in Bartmania, and Bart Simpson-themed merchandise began to appear trumpeting his rebellious attitude and delight at being an underachiever. This made numerous parents and educators make public statements of concern about Bart as a bad role model for children.  Nancy Cartwright said 19 years after The Simpsons debuted, “Bart is a really good boy. He’s just mischievous….Bart can do some nasty things, but they seem so tame, by today’s standards. What was shocking 19 years ago, when the show started, isn’t the least bit shocking today. Bart hasn’t changed.” In 2013 a BBC poll reported that 37% parents of children named Bart Simpson as their top roll model.

In The Simpsons, Bart’s father Homer Simpson is the voice of Dan Castellenata. He was born in Chicago in 1957. (He also does the voices of other characters on the show including Grampa “Abe” Simpson II, the town drunk of Springfield – Barney Gumble, the host of a children’s TV show named Krusty the Clown, former winner of the Springfield Entertainer of the Year Award – Sideshow Mel, the janitor at Springfield Elementary School named Groundskeeper Willie, sometime resident of the Springfield Retirement Castle – Hans Moleman, and Springfield’s Mayor Joe Quimby). Castellenata has also appeared in over 20 animated films, including as the voice of the Genie in The Return of Jafar and Aladdin’s Arabian Adventures, as Frollo’s Soldiers in The Hunchback of Notre Dame, as Thing One and Thing Two in The Cat in the Hat, and The Wickersham Brothers in Horton Hears a Who.

In “Do The Bartman” the lyrics the song begins with Homer Simpson yelling at Bart. Then Bart raps that he’s made delinquency an art, giving examples of fixing test scores, and “dropping banana peels all over the [school] floor.” Then he introduces his dance move called the Bartman: “move your body if you’ve got the notion, front to back in a rock-like motion.”

Bart explains that he not only gets into trouble at school, but also at home. For example, his Mom, Marge Simpson, got mad when he “put mothballs in the beef stew.” At one point in the song, Bart’s sister Lisa plays a saxophone between refrains. In the song there are backing vocals, most prominently by Michael Jackson.

“Do The Bartman” peaked at #4 in Vancouver (BC), #6 in Hamilton (ON), #8 in Minneapolis/St. Paul and Buffalo, and #10 in San Bernardino (CA). In America the single only charted in about five states. Internationally, “Do The Bartman” climbed to #1 in Australia, Ireland, New Zealand, Norway and the UK, #2 in Spain, #3 in the Netherlands and Sweden, #4 in Belgium, and #5 in Denmark, Finland and Germany.

In 1991 the Simpsons released a follow up rap single titled “Deep, Deep Trouble”. The song also has Bart Simpson doing the lead vocals, and singing about the trouble he gets into. The song climbed to #1 in Ireland, #7 in the UK and #10 in New Zealand.

In 2000 Nancy Cartwright published her autobiography titled My Life as a 10-Year-Old Boy. In 2004 she adapted the book into a one-woman play which she took to Greater Sydney, Australia, Toronto, Canada, Edinburgh, Scotland and London, England.

Michael Jackson died at age 50 in 2009 from cardiac arrest due to complications from an overdose of the sedating drug named Propofol.