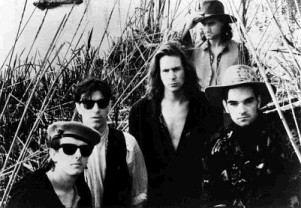 Liam Ó Maonlaí was born in 1964 in County Dublin, Ireland. He grew up in suburban Dublin and in his teens he won an award for playing the bodhrán, an Irish drum. In 1979 he formed a punk rock band called The Complex, which he left in 1981. Fiachna Ó Braonáin was born in Dublin in 1965. Other original bandmates included drummer Jerry Fehily (born in Cork, Ireland, in 1966), saxophonist Leo Barnes (born in 1956), and bass guitarist Peter O’Toole (born in 1965 in Dublin). Fehily only began learning the drum at the age of 17. O’Toole left school when he was sixteen and got jobs delivering bread, making fiddles and working as a lumberjack. “We’d been in the same band before,” O’Toole says of O’Maonlai, “but we’d never actually met. It was that sort of band — there were loads of people.” O’Maonlai, Ó Braonáin, Fehily, Barnes and O’Toole made up the core of Hothouse Flowers when they formed in 1985.

There was also a second drummer, John Paul Tansey, and a second bass player named Michan Walker. But Walker quit the band in ’86, and Tansey left the following year.

In 1987, the mostly vegetarian-hippie revival band, Hothouse Flowers, had a Top Ten hit in Ireland titled “Love Don’t Work This Way”, peaking at #7. In 1988 Hothouse Flowers released their debut album People. It was the most successful debut album in Irish history, debuting at number-one on the Irish album chart. Hothouse Flowers first single from the album, “Don’t Go”, was a life-affirming number marked by its urgent vocal and its brisk piano runs. 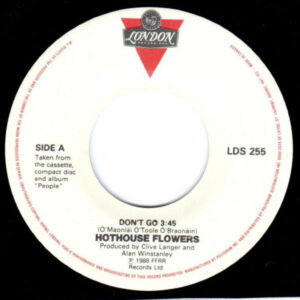 “Don’t Go” was cowritten by Maonlaí, O’Toole and Ó Braonáin. The song is filled with the senses, each hinting that love is on its way. From ancient days, adults have spoken in code to children about the birds and the bees in reference to people making love. Cole Porter wrote in the 1920s “Birds do it. Bees do it. Even educated fleas do it. Let’s do it, let’s fall in love.” And so Hothouse Flowers sing “There’s a buzzing fly hanging around the bluebells and the daisies. There’s a lot more loving, yeah, left in this world.” The band sings about blossoms in the sun, “warm and soft sandy beaches” and “toes submerged in the water…” There is a blue sirocco blowing warm on the singers face. A sirocco is a hot dust-laden wind from the Libyan deserts that blows on the northern Mediterranean coast chiefly in Italy, Malta, and Sicily. With black cats, white horses, and children building sandcastles on the beach, the singer explores his love interest, “don’t go.” There is so much promise in the air and love that waits for them.

“Don’t Go” was viewed by over 200 million people when Hothouse Flowers performed it on a Euro-vision Song Contest special. The song was not in the contest, but Hothouse Flowers played on stage during an intermission in the contest. “Don’t Go” climbed to #2 in Ireland, #6 in New Zealand and Sweden, #11 in the UK, and #16 in Austria. In North American the single peaked at #9 in Boston, #18 in Montreal, #19 in Vancouver (BC), and #23 in Hamilton (ON) .

A followup single, “Feet On The Ground”, peaked at #1 in Ireland. While “Easier In The Morning” climbed to #6 in Ireland late in 1988. In 1989 Ó Braonáin appeared as a guest musician on the American folk-rock Indigo Girls single “Closer To Fine”.

In 1990 Hothouse Flowers released their second album, Home. It topped the Australian album chart and made the Top Five on the UK album chart. Their debut single from the album, “Give It Up”, climbed to #3 on the Irish singles chart. Another track from the album, a cover of the Johnny Nash song “I Can See Clearly Now”, climbed to #5 on the Irish singles chart in 1990. And a third single from Home, titled “Hardstone City”, peaked at #7 in Ireland in 1991. Rolling Stone described the band as “Celtic soul à la Van Morrison and rock & roll à la Bruce Springsteen, as well as strains of traditional Irish music, country and gospel.”

Later in 1991 Hothouse Flowers and the Dubliners joined forces to record a cover of the Bette Midler song “The Rose”. The recording was in aid of the Irish Society for Autism and The Irish Epilepsy Association. The single climbed to #2 on the Irish pop chart.

In 1993 Hothouse Flowers released their third album, Songs From the Rain. The debut single, “An Emotional Time” shot to #5 on the Irish singles chart. However, the followup single failed to chart in Ireland and the UK. It was titled “Thing Of Beauty“. On July 17, 1993, Hothouse Flowers appeared in concert on Seabird Island in Agassiz. They shared the stage with the Tragically Hip, Crash Vegas, Daniel Landis and Midnight Oil. Agassiz is a town in the Fraser Valley, British Columbia, about a 90-minute drive east of Vancouver.

As well in 1993 Hothouse Flowers bandmates, Leo Barnes and Liam Ó Maonlaí, were part of Peace Together. Other recording artists involved included Sinéad O’Connor, Peter Gabriel, and Feargal Sharkey. Peace Together was a project aimed to raise funds to support cross-community activities for young people in Northern Ireland.

Later in 1993, Ó Braonáin was a session musician on a Def Leppard track “From The Inside” on the album Retro Active. In 1996 he collaborated with folk musician Michelle Shocked to release the album Artists Make Lousy Slaves. And in 2007 he appeared in a duet with Belinda Carlisle on her album Voila. In addition to that, Fiachna also previously hosted “Poetic Champions”, a radio show that aired on Radio Ireland’s Today FM every Sunday night from 7-8pm. The program involved Irish musicians who discuss the various albums that had an influence on them and their careers.

In 1998 Ó Maonlaí appeared in the Irish film Waking Ned Divine as a performer. In 1999 Ó Maonlaí appeared in the dramatic Irish film I Could Read the Sky. Subsequently, he has appeared in a film drama in 2004 titled Timbuktu. In 2005 he released a solo album entitled Rian which is a collection of tunes and songs in Irish. In 2006 he appeared in a Hollywood film titled The Busker. And in 2008 he appeared in a documentary about his 3,000 mile travels across Mali, in west Africa titled Dambé: The Mali Project. Ó Maonlaí collaborated with Irish uilleann pipes player Paddy Keenan, and met numbers of musicians across Mali. He performed in the October 16,2009, Dublin to Gaza benefit concert. And in 2015 he was featured in a documentary short titled Men Improve with the Years.

In 2019 Hothouse Flowers, together with Moya Brennan of Clannad, opened a new venue in the Windmill Quarter in Dublin with a series of concerts. Peter O’Toole has continued to perform and in the spring of 2020, during the pandemic, he released a solo album titled Leaving White Cedar.