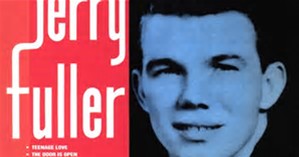 Jerry Fuller moved to Los Angeles in 1959 getting work as a demo singer. With this exposure he got signed with Four Star Music and Challenge Records to write and record songs. His first recording with Challenge in 1959 was a doo-wop tune called “Betty My Angel”, which became a Top 20 hit in San Bernardino, California. That same year he recorded an uptempo cover of the Patti Page pop classic, “Tennessee Waltz.” It went Top 20 in Toronto, Hartford, Connecticut, and Jacksonville, Florida. It became Fuller’s biggest hit on the Billboard Hot 100, peaking at #63.

While Fuller was at Four Star Music as a writer from 1959 to 1967, he wrote over 400 songs that were recorded by many recording acts of the era. Fuller has recorded a couple of songs in late 1960 into 1961 that got little attention. But in the summer of 1961 he recorded “Guilty of Loving You/First Love Never Dies”. “Guilty Of Lovin’ You” peaked at #94 on the Billboard Hot 100, making #5 in Billings, Montana, and Top 20 in Dallas. But it was the flip side, “First Love Never Dies” that got on the charts in San Francisco, Los Angeles, Seattle and Vancouver. And here on CKWX the tune had its best chart performance in North America, peaking at #13. The song did not chart on the Billboard Hot 100. All at once I miss you,
so long since I’ve kissed you,
how I love to look into your eyes.

Yes, I still dream about you,
my world is lost without you,
for you were my first love, and
first love never ever dies.

The love I left behind me,
comes back to remind me,
that you were my first love, and
first love never ever dies.

So, if you’re thinking of me,
and you find you still love me,
there’s no use to go on living lies.

Fuller’s song is about the lingering fire kindling inside the hearts of two people who’s flame still burns after they’ve said goodbye to the person who was their first love. Fuller’s song romanticizes the impact of a first love, contesting that first love never, ever dies. It runs contrary to the adage popularized in the 1970s, “you have to kiss a lot of frogs before you meet a prince.” In that case, it would seem that first, second, and maybe even a third love aren’t quite the ticket. And only with some experience under ones belt does it become clear what the real thing is when it finally comes along.

However, it can also be true that others around us impress upon us that a first date with the first person we go out with can never lead to anything. We are told we are too young, too inexperienced. But there are stories of people who meet in high school, even in elementary school, who date and get married. And there are cases where a young, inexperienced couple, are pressured into breaking up by parents and peers after high school. Go and date other people, they are encouraged. Still, they can find themselves thinking and dreaming about their first love. And if they truly do feel that their world is lost without that first love, in that case it is indeed best to hurry back to that first love. If they are still single and available.

Perhaps, instead of importing an adage like “first love never, ever, dies,” we have to ask ourselves: Has this been my experience? Am I still pining after the first person I had a crush on? Or am I quite clearly over them a long time ago after they upset, annoyed or disappointed me? Was my first love a real sweetheart or were they a flake, a jerk?

The Cascades did a cover version of the song which did not chart. In their version they included two verses Jerry Fuller omitted from his recording:

Seems like yesterday,
we both went our separate ways,
one last kiss and then we said goodbye.

When you’re young,
you sometimes make mistakes, but then,
where love is strong,
it never hurts to try again.

Frankie Avalon also made a recording of the song in 1963 where it charted in briefly in the radio markets of Philadelphia, Miami and in Idaho.

In Vancouver, Jerry Fuller’s biggest hit was “Shy Away” which peaked at #3 in April 1961. Fuller continued to release another half a dozen songs on Challenge Records between 1962 and 1966. But he was drafted into U.S. Army in 1962. Without an ability to tour to promote his songs, he only had local hits like “Footprints In The Snow“, a Top 20 hit on CFUN in 1964. That same year when he finished his service in the U.S. Army, Fuller got work with Four Star publishing in their New York office. so he took up residence in Manhattan. During this time Fuller got a gig at the University Twist Palace in Albany, New York. Blown away by the local house band, The Knickerbockers, Fuller made a demo tape of the group. He sent it to Challenge Records. The LA label was excited to meet them and Fuller brought The Knickerbockers to Los Angeles where they got a record deal. In 1965, Fuller ended up producing the band who had a #20 hit in the USA (#6 in Vancouver) called “Lies”.

Through the 70s, 80s and 90s, Jerry Fuller mostly produced records for country stars like Ray Price, Reba McEntire, Freddie Hart, Dobie Gray, John Conlee and Collin Raye. His most significant single to write and record was “Show And Tell”, a number one hit for Al Wilson in 1973.