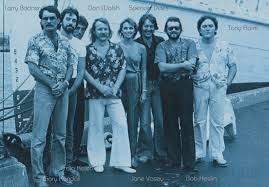 The Downchild Blues Band was formed in Toronto in 1969 and continues to perform today. It was co-founded by two brothers, Donnie “Mr. Downchild” Walsh and Richard “Hock” Walsh. The band’s international fame is partially due to three of its songs, the originals “I’ve Got Everything I Need (Almost)” and “Shot Gun Blues”, and its adaptation of “Flip, Flop and Fly”, all from their 1973 album, Straight Up, being featured on the first Blues Brothers album, Briefcase Full of Blues, from 1978. “Flip, Flop And Fly” has been Downchild’s biggest hit single, and became the signature song of Hock Walsh. The band’s musical style is described as being “a spirited, if fundamental, brand of jump-band and Chicago-style blues.” The bands’ name came from the Sonny Boy Williamson II song, “Mr. Downchild”.

“Flip, Flop And Fly” is a jump blues-style song recorded by Big Joe Turner in 1955. The infectious tune was a fusion of rhythm and blues and the emerging rock ‘n roll sound. The song was a hit reaching #2 on Billboard magazine’s R&B chart. It was Turners’ twelfth of seventeen Top Ten hits on the Billboard R&B charts in the 1950’s. “Flip, Flop And Fly” has been recorded by a variety of artists, including early rock and roll performers such as Elvis Presley, Bill Haley & His Comets, Jerry Lee Lewis, Johnny Ray, The New York Dolls and The Blues Brothers.

“Flip, Flop and Fly” has an arrangement similar to Big Joe Turner’s 1954 #1 R&B hit “Shake, Rattle And Roll”, as was noted in a review of “Flip, Flop And Fly” by Billboard magazine in February 1955. It has been contended by some music critics that leftover verses from the “Shake, Rattle and Roll” recording session were then reworked into Turner’s follow-up hit, “Flip, Flop And Fly”. Both songs are up-tempo twelve-bar blues with a strong backbeat. “Fli, Flop And Fly” was cowritten by Charles E. Calhoun and Joe Turner, though credited to his wife Lou Willie Turner.  Charles E. Calhoun was one of several pseudonyms used by Jesse Stone who was the house arranger and songwriting session man for Atlantic Records. He worked with the Drifters, the Clovers, Big Joe Turner (he also wrote “Shake, Rattle And Roll”), and other Atlantic recording artists. When a group called the Blenders broke up, Stone asked ex-Blenders Abel DeCosta and lead singer Ollie Jones (originally a member of the Ravens) — and two other individual vocalists, Eddie Barnes and Robie Kirk, to form a back-up group to be available for the recording of records for many of the stable of recording artists with Atlantic.

Stone was a pianist and arranger in his late teen’s and twenties in the Roaring Twenties in Kansas City. In an autobiography, Count Basie wrote that Stone had a reputation as the best pianist when Basie first came to Kansas City in 1920. Later  Stone had an orchestra that was hired by Duke Ellington at the Cotton Club in the Theatre District in Manhattan in 1936. Stone wrote “Idaho” that sold three million records for Guy Lombardo in 1942. Stone wrote “Money Honey” for Clyde McPhatter and The Drifters which was their debut single two million selling single in 1953 that topped the R&B chart for eleven weeks. Stone also wrote “Don’t Let Go” for Roy Hamilton in 1958. In 1954, Stone arranged a song called “Sh-Boom” for the doo-wop group, The Chords. That song peaked at #2 on the R&B charts. An all-white pop group from Canada, The Crew Cuts, covered the song and together with the original version by The Chords, the song peaked at #1 for seven weeks with both versions listed at the top of the Cashbox singles chart.

After doing back-up for several Atlantic recording acts, Jesse Stone hooked backing group – The Cues – up with the Messner Brothers and Aladdin Records in late 1954. The Cues had provided backing vocals for Big Joe Turner on “Flip, Flop And Fly”, and for LaVern Baker on “Tweedle Dee” and “Jim Dandy”, and later Roy Hamilton on “Don’t Let Go”. Under his direction they recorded a number of singles, including a Top Five hit in Vancouver in 1957 titled “Why“.

“Flip, Flop And Fly” is a song about a guy who has his mojo working. He gets turned on thinking about meeting up with his main squeeze and kissing her. This is a surefire remedy to anytime he has the blues. Meanwhile, he’s also aware he’s quite attractive and “a catch.” He sums up, “I’ve got so many women I don’t know which way to jump.” So this guy is like a kid in a candy store. Even if he’s excited about getting together with his baby, he’s got a wondering eye. He’s got confidence and charisma when it comes to having sexual relationships. With its upbeat bluesy tempo, “Flip, Flop And Fly” was as much about dancing as thinking about what the lyrics were saying. I doubt many people cared if this guy was being pulled in a dozen different directions as women flirted with him, and he presumably flirted back. Most people on the dance floor were trying to jive to the song like they were doing back in 1955 when Big Joe Turner first made it a hit.

“Flip, Flop And Fly” was a single from the bands’ 1974 album, Ready To Go. At that time the band consisted of Don “Mr. Downchild” Walsh on harmonica and guitar, Bill Bryans on drums, Jane Vasey on piano, David Woodward on tenor saxophone and Tony Flaim providing vocals. Flaim appeared on three other albums the band released in the 1980’s. Dave Woodward appeared on the bands’ first album, Bootleg. He moved on to join the Powder Blues Band and also has played with Jim Byrnes and Juice Newton. Jane Vasey appeared on several Downchild Blues Band albums into the early 1980’s and then keyboards on an album with children’s music artists Sharon, Lois & Bram. Meanwhile, drummer Bill Bryans has collaborated with M+M (formerly Martha and the Muffins), the Parachute Club, David Essig, The Original Sloth Band and others. And throughout the 45 years of the bands’ existence, Don “Mr. Downchild” Walsh has kept the band moving forward in the midst of changes in the lineup.