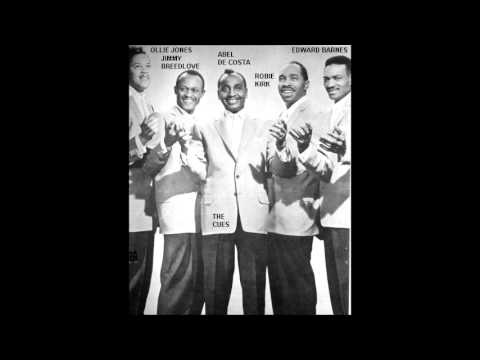 From the late 1940’s Atlantic Records was a primary company for rhythm and blues artists. In 1954, with rock n’ roll a new sound on radio, The Cues were Atlantic Records’ first studio vocal group. Their primary way of earning a living was by being a back-up group for other R&B artists on the Atlantic label. Though they had a group name, The Cues, that they tried to make a hit record with, they earned their bread and butter going by different names. As back-up to Ruth Brown they were the Rhythm makers. As backup group to LaVern Baker they were known as the Gliders. When doing backup on a recording for Big Joe Turner they went by the name of the Blues Kings. And with Ivory Joe Hunter they took the moniker, the Ivory Tones.

Jesse Stone was the house arranger and songwriting session man for Atlantic Records. He worked with the Drifters, the Clovers, Big Joe Hunter, and other Atlantic recording artists. When a group called the Blenders broke up, Stone asked ex-Blenders Abel DeCosta and lead singer Ollie Jones (originally a member of the Ravens) — and two other individual vocalists, Eddie Barnes and Robie Kirk, to form a back-up group to be available for the recording of records for many of the stable of recording artists with Atlantic.

Stone was a pianist and arranger in his late teen’s and twenties in the Roaring Twenties in Kansas City. In an autobiography, Count Basie wrote that Stone had a reputation as the best pianist when Basie first came to Kansas City in 1920. Later  Stone had an orchestra that was hired by Duke Ellington at the Cotton Club in the Theatre District in Manhattan in 1936. Stone wrote “Idaho” that sold three million records for Guy Lombardo in 1942. Stone wrote “Money Honey” for Clyde McPhatter and The Drifters which was their debut single two million selling single in 1953 that topped the R&B chart for eleven weeks. Stone also wrote “Don’t Let Go” for Roy Hamilton in 1958. In 1954, Stone arranged a song called “Sh-Boom” for the doo-wop group, The Chords. That song peaked at #2 on the R&B charts. An all-white pop group from Canada, The Crew Cuts, covered the song and together with the original version by The Chords, the song peaked at #1 for seven weeks with both versions listed at the top of the Cashbox singles chart.

After doing back-up for awhile, Stone hooked The Cues up with the Messner Brothers and Aladdin Records in late 1954. The Cues recorded for the Aladdin Record subsidiary on the Lamp label. Simultaneously, the quartet also recorded by another name, the Four Students, for RCA. The Four Students recorded “So Near and Yet So Far” on the Groove label in mid-1955. The Cues recorded a song titled “Only You” on Jubilee Records. This was a completely different song from the million selling hit for the Platters. But it didn’t help get “Only You” by The Cues any attention to have a song title of the same name as The Platters big seller already on the charts.

While they had little success under their own name, The Cues continued to prosper behind the scenes, backing up LaVern Baker on “Tweedle Dee” in 1955. In February 1955 the Cues, under the pseudonym the Blues Kings, had a hit single in “Flip, Flop and Fly” with Big Joe Turner. In 1956 The Cues backed up Lavern Baker on “Jim Dandy”. The song became a #1 R&B hit in the USA in March of 1957.

The Cues sang back-up on Roy Hamilton’s on “Don’t Let Go”, a #2 hit for Hamilton on the USA R&B charts in 1958. “Don’t Let Go” was the first rock n’ roll pop hit to be recorded in stereo. The Cues also were the back-up group for many of Nat “King” Cole’s Capitol Record singles from late 1955 through to 1959. Another group that sang back-up for Nat “King’ Cole was a group called the Four Knights. While The Cues were doing back-up on numerous recordings they didn’t often get listed on the credits when a 78 rpm or a 45 rpm was released.

Toward the end of 1955 The Cues became a group of five when they added Jimmy Breedlove to their number. With this addition The Cues signed a contract with Capitol Records and recorded a dozen songs hoping for a breakthrough on the pop charts. The first release was “Burn That Candle”, which initially took off. However, Bill Haley & His Comets immediately covered the song for Decca Records. It became a national hit in November 1955, keeping the Cues version off the charts.

The Cues recorded a single for Capitol Records in the winter of 1956 called “Why”. The composer of “Why” was Charles E. Calhoun, a pseudonym for Jesse Stone. In 1954 Calhoun composed “Shake, Rattle and Roll” for Big Joe Turner that became a #1 R&B hit in the ‘States. It was covered by Bill Haley & His Comets and became an even bigger seller as a crossover pop hit and one of the earliest rock n’ roll records to appear on the Billboard pop charts. Charles E. Calhoun was a pseudonym that Jesse Stone used, along with Chuck Calhoun, when getting credits for songwriting on the records as producer. Marc Goldberg reports on his website that DJ Alan Freed played “Why” on his radio show. The lead singer on “Why” was Jimmy Breedlove.

“Why” was a hit on the Vancouver pop charts peaking at #4 in January 1957. However, Vancouver was one of the few markets where there were many sales of the record at local stores. The song is about a guy who wants to go out with a girl and she thinks he’ll only break her heart. They he asks her to marry him and she says yes. She decides that an offer of marriage is proof that he isn’t kidding around. The song is an extreme example of love at first sight and/or quickly changing one’s mind about the person in front of you.

The Cues later joined Buck Ram’s traveling “Happy Music” national tour. Ram had a long history in the music business as arranger of records for Count Basie, Duke Ellington, Tommy and Jimmy Dorsey. He co-wrote “I’ll Be Home For Christmas,” a huge hit for Bing Crosby in 1943. He discovered The Penguins who had a hit in 1955 called “Earth Angel”. Ram also discovered The Platters and got them signed with Mercury Records. They went on to have a string of hits including “The Great Pretender”, “Only You” and “Twilight Time”. The later hit was written by Ram.

Though the Cues got exposure on the Happy Music national tour in the late 50’s, when they recorded four more singles for Capitol none of them made the Hot 100. The Cues’ next record, “Crazy Crazy Party”, appeared on the Capitol subsidiary Prep. Alan Freed gave the song considerable airplay, which generated a little success on the sales charts, but it was a case of too little, too late. In 1960, they recorded one last song for Festival, a cover of the standard “Old Man River”. The group disbanded in 1961 after recording one final album.

Robie Kirk, group member of The Cues, also was a songwriter. Kirk went under the pseudonym of Winfield Scott (which happened to be the name of a Civil War general who fought on the side of the Union). He wrote “Tweedle Dee” for LaVern Baker. In 1962 he wrote “Return to Sender”, a #1 hit that spring for Elvis Presley. Kirk (under his pen name) also wrote “One Broken Heart For Sale”, a hit single from Elvis’ movie It Happened at The World’s Fair. That song peaked at #11 on the Billboard Hot 100. Winfield Scott (aka Robie Kirk) also wrote “Many Tears Ago” for Connie Francis, which climbed to #7 in 1960 on the Billboard Hot 100. Other recording artists who recorded songs credited to Winfield Scott include The Animals, Solomon Burke, Peggy Lee, Otis Redding, Mel Torme, Tom Jones, Carl Perkins and The Osmonds.

The Cues singer, Ollie Jones, wrote many hit records in the 50’s. These include “Send For Me”, the #40 song of the year for 1957  sung by Nat King Cole. He also wrote “Tiger” for Fabian, a #3 hit on the Billboard Hot 100 in 1959. In 1960, Ollie Jones wrote “Step By Step” for The Crests. When Johnny Maestro left The Crests to go solo, Jones wrote “Model Girl”, which climbed to #6 on CKWX in Vancouver. In 1962, Ollie Jones penned “Where You Are” for the Four Tops on the Riverside label before they moved to Motown and had a string of hits starting with “Baby I Need Your Lovin'” in 1964. His songs have been covered by The Ronettes, Patti LaBelle, The Stylistics, Johnny Ray, Perry Como, Maynard Ferguson, Gene McDaniels, Gene Vincent, Brook Benton, Jerry Butler, Fontella Bass and Fleetwood Mac.

While Jimmy Breedlove didn’t pen any notable hit records, he still had songs he wrote recorded by some of the pop stars of the day. These include Julie Rogers, B.B. King, Wayne Fontana & The Mindbenders, Peter & Gordon, LaVern Baker and Johnny Preston.