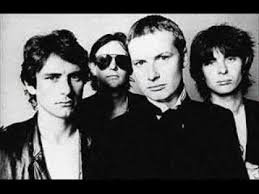 XTC released four singles that missed the pop charts in the UK. But their fifth single release in April 1979, “Life Begins At The Hop“, expanded their fan base, including over in Canada. “Life Begins At The Hop” climbed to #12 in Vancouver in April 1980. XTC made several more appearances on the Vancouver pop charts. One of these was  in the winter of 1980-81 with “Generals And Majors”. The music video shows the band playing servers and a group of men in military uniforms, one of them is UK business magnate and owner of Virgin Records, Richard Branson, driving a Go-kart and jumping on an inflatable bouncy castle. Andy Partridge recalled, Branson was featured in the music video “because he’s a complete publicity hog. … he decided he was gonna turn up and keep suggesting that he be in the video. That is the worst video ever made by man.”

Up to your waist in water, up to your eyes in slush,
Using the kind of language that makes the sergeant blush.
Who wouldn’t join the army? That’s what we all inquire.
Don’t we pity the poor civilians sitting beside the fire.

“Generals And Majors” peaked at #6 in Vancouver. It climbed to #18 in Ottawa and Toronto, and #29 at WLS in Chicago. However, it failed to crack the Billboard Hot 100, stalling at #104. The lyrics of the song describe military leaders, “generals and major” as living in a world of their own. They’re never happy unless they have a war to fight. When they have no war to fight they are unhappy, and “tired of being action less.” According to the song, the only thing that temporarily gets military men to come down to earth is the lived experience of losing a battle or making a case to go to war. When generals and majors are “in the shade” they get restless for battle.

“Generals And Majors” raises an issue that is a problem for any democracy with a standing army. When there is a yearly budget for Defense, there is always pressure from the military to increase the budget to buy new weapons. Being battle ready, at some point, optimally provides newer recruits with a real live war to fight so another generation of soldiers, sailors and airmen can pass on their experience to the ones coming after them. “Generals And Majors” tells us that being around others who have “made the grade”, fought a war, makes the ones who haven’t restless for a firsthand experience.

For most citizens, having a military is intended to respond to the actions of an aggressor. However, history teaches that there are times when a nation goes to war after falsely alleging the aggression of another. In August 1939, Adolph Hitler accused Poland of attacking Germany. On August 31, 1939, “Nazi S.S. troops wearing Polish uniforms staged a phony invasion of Germany, damaging several minor installations on the German side of the border. They also left behind a handful of dead German prisoners in Polish uniforms to serve as further evidence of the alleged Polish attack, which Nazi propagandists publicized as an unforgivable act of aggression.”

On March 19, 2003, United States President George W. Bush accused Iraq of attacking the United States on September 11, 2001, and of having weapons of mass destruction. The day before he failed to get a resolution passed at the United Nations authorizing a war against Iraq. The Washington Post published an article headlined “Bush Clings to Dubious Allegations About Iraq.” The paper reported, “As the Bush administration prepares to attack Iraq this week, it is doing so on the basis of a number of allegations against Iraqi President Saddam Hussein that have been challenged—and in some cases disproved—by the United Nations, European governments and even U.S. intelligence reports.” Vice-President Dick Cheney also alleged Iraq was responsible for the anthrax attacks. The Iraq War has since been largely viewed as a preemptive war and part of the military and foreign policy “doctrine” of President Bush. If a threat was perceived, regardless of whether the threat was substantiated or not, a nation’s leader could declare war.  When political leaders are eager to declare was it is important to have military leaders who are not like the ones described in “Generals And Majors”.

XTC had several other Top 40 singles in the UK in the early ’80’s. But “Towers of London” and “Sgt. Rock” failed to chart in Vancouver or elsewhere in Canada. However, “Making Plans For Nigel” and “Senses Working Overtime” were both Top Ten hits in Vancouver. Between 1977 and 2005, XTC released 41 singles and 14 albums.

XTC only had one of their songs crack the Billboard Hot 100. This was “Mayor of Simpleton”, which peaked at #72 in 1989. Andy Partridge in a 1981 interview in the Musician lamented, “I don’t know what to think about America. We can only play here and hope. We’re not an American sounding group. We don’t conform to any popular American fantasies – we don’t have any strains in our music that Americans like because it’s their culture or recent past history, such as that country music feel. If I sat down now, I could write the kind of song that Americans like to buy. Not to say they would, but every country loves its own reflection, it’s that narcissistic thing. America likes that romantic, denim cowboy – expensive and cool in their music. Our music is different. We don’t live American life-styles. I want to be successful for what we are. To everyone in England, everybody in America is either John Wayne or Farrah Fawcett. For Americans, every Englishman is Terry Thomas and every woman is the Queen.”

In 2006 Andy Partridge and Colin Moulding found they’d drifted apart as a creative team and Partridge told the press that XTC as a band was now “in the past tense.”