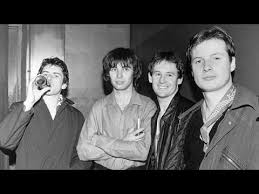 While “Making Plans For Nigel” was on the pop charts in Vancouver, XTC gave two concerts at the Commodore Ballroom on March 1st and 3rd, 1980. On October 27, 1980, XTC performed in concert in Vancouver at the Pacific Coliseum just as “Generals And Majors” began to chart locally. In 1982 they returned to the Vancouver pop charts with “Senses Working Overtime”. “Senses Working Overtime” explores functions of the senses, each of which is evoked several times in the course of the song. For example the chorus line about trying to taste the difference between a lemon and a lime (taste); The similarity of sounds between black skies, black eyes and black ice (hearing); pain and pleasure (touch); night fighting day (sight); turds and treasure (smell). Along with the senses there is awareness of bullies, crime and people who are “fodder for the cannons.” Andy Partridge (guitar and vocals) once said of this song, “It’s about what it’s like to be alive in England.” The struggle to make a living and the hectic pace made everyones five senses function on overdrive.

At the time of the recording, Barry Andrews was also part of XTC. The band had several other Top 40 singles in the UK at this time, “Towers of London” and “Sgt. Rock”, which failed to chart in Vancouver or elsewhere in Canada. Between 1977 and 2005 the band released 41 singles and 14 albums.

However, XTC only had one of their songs crack the Billboard Hot 100. This was “Mayor of Simpleton”, which peaked at #72 in 1989. Andy Partridge in a 1981 interview in the Musician lamented, “I don’t know what to think about America. We can only play here and hope. We’re not an American sounding group. We don’t conform to any popular American fantasies – we don’t have any strains in our music that Americans like because it’s their culture or recent past history, such as that country music feel. If I sat down now, I could write the kind of song that Americans like to buy. Not to say they would, but every country loves its own reflection, it’s that narcissistic thing. America likes that romantic, denim cowboy – expensive and cool in their music. Our music is different. We don’t live American life-styles. I want to be successful for what we are. To everyone in England, everybody in America is either John Wayne or Farrah Fawcett. For Americans, every Englishman is Terry Thomas and every woman is the Queen.”

In 2006 Andy Partridge and Colin Moulding found they’d drifted apart as a creative team and Partridge told the press that XTC as a band was now “in the past tense.”