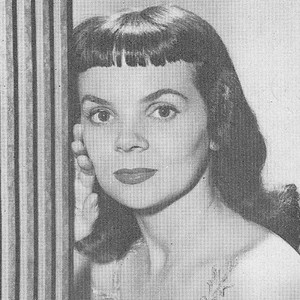 #87: Gonna Find Me A Bluebird by Joyce Hahn

Joyce Hahn was born in 1929 in Eatonia, Saskatchewan. As a child, Hahn performed from the mid-1930s to the early 1940s with The Harmony Kids, a family troupe formed by her father, Harvey. The Harmony Kids also included her brothers Bob and Lloyd and sister Kay. headed eastward across Canada from frontier Saskatchewan to the bright lights of Broadway during the Great Depression. Their resourceful father Harvey had schooled them all in music and had built a customized trailer to transport the family across the country making pass-the-hat appearances along the way at clubs, barns and radio stations, where a youthful but enterprising Robert Hahn would often offer to write them a station ID for a small fee. The Harmony Kids ended up in New York, where they appeared on the popular radio network show, We the People. As their popularity grew, the war interceded and they headed back to Canada.

Later, she sang in Montreal cabarets, first in a duo with Kay and 1947-50 with Peter Barry’s Rhumba Band. A soloist 1948-56 on various CBC Montreal radio shows, including some with her brother’s group The Bob Hahn Quartet. From 1952 she appeared on Canadian television. In 1955 Hahn was co-star with Wally Koster on CBC TV’s Cross-Canada Hit Parade and its successor, Music’60.

Hahn sang songs each week on Cross-Canada Hit Parade, including  the Four Lads “Moments To Remember” on an episode in 1955.

She sang the hits of the era, including Gale Storm’s “Dark Moon” and the Diamonds’ “Little Darlin'”. The first Cross-Canada Hit Parade show of the 1956 season was played on a set that the producers boasted was the largest used in Canada to date. It included Conklin’s Children’s Carnival, with three elephants and a roller coaster.

In the 1950s she made several recordings on both the Sparton label and with Cadence. Her first recording in 1956 was on Sparton was in February with “You’ve Got The Love”. The B-side “Why Should I?” climbed to #8 in Ottawa in March ’56. In April ’56 “(The Kind Of) Girl For Joe” got a little airplay. Hahn’s next Cadence single, “I Gotta Know”, was a rockabilly tune. That year she also released it on Sparton. The B-side was “The Grass Was Greener”, in the style of Gogi Grant. In December 1956, the song climbed into the Top 5 in Rochester, New York. Her next release was on the Cadence label titled “Gonna Find Me A Bluebird”.

“Gonna Find Me A Bluebird” was written by Marvin Rainwater. He was born in 1925 in Wichita, Kansas. He learned classical piano as a child. While he was in the United States Navy in WWII, he learned to play guitar. When he became a country singer, he performed onstage wearing Native American-themed outfits and a headband. He told reporters he was one-quarter Cherokee. Marvin and his brothers played as a band around Virginia. In late 1954, Rainwater’s composition, “I Gotta Go Get My Baby” became a Top 30 hit for Teresa Brewer. Rainwater got his big break in the music business when he performed on Arthur Godfrey’s programs. He won first place on Arthur Godfrey’s Talent Scouts on May 9, 1955. Later that year, Rainwater got a regular spot on ABC-TV’s Ozark Jubilee for several years based in Springfield, Missouri. His song, “Gonna Find Me A Bluebird” became a #3 country record hit across America. His 1958 recording of “Whole Lotta Woman” became a number-one pop hit in the UK. Between 1957 and 1959 Marvin Rainwater had five Top 20 hits on the Billboard Hot Country Songs chart. His voice began to give out, and he developed calluses on his vocal cords. As a result, Rainwater and MGM Records parted ways in 1960. In the mid-60’s, Rainwater and country singer Faron Young gave a concert in Washington D.C. at Constitution Hall with President Lyndon Johnson and First Lady Ladybird Johnson present. Marvin Rainwater appeared occasionally at rockabilly festivals in Europe. In the 70’s he developed throat cancer. He died at the age of 88 in 2013.

“Gonna Find Me A Bluebird” is a song about someone who’s been rejected by a lover finding consolation in the company of a bluebird. With a broken heart, fresh from the break-up, the bluebird’s song brings some healing of the hurt. Prior to the breakup, the man felt complete, and that his dreams had come true. However, after learning his love was “unwanted,” he became a man who was haunted. Since he’s cried so many tears, he figures a bluebird and a rainbow – which both offer beauty though song and color – will be more fruitful objects of his attention. After all, he won’t get rejected by either the bluebird or a rainbow.

Hahn released a followup titled “Trying To Forget About You”. It peaked at #2 in Ottawa in February 1958. The B-side “Did You Close Your Eyes”, peaked at #5 in Toronto in November of 1957. In 1959, Joyce Hahn released “The Picnic”, which was the theme from Sandwich Time. The song was written by Joyce’s brother Bob. The story in the song is about a romantic couple who go out on a picnic. She is hoping for some romance and asks her boyfriend to “kiss me.” But all he wants to do is eat. The boyfriend is focused on problems: 1) “there’s not enough mustard on the meat,” 2) “we should’ve brought more lemonade.” She asks him to “hug me,” but the boyfriend, focused on the picnic, announces “I like this tangy cheese.” With more urgency, she asserts “hold me,” and he asks “will you pass the crackers please?” “Thrill me” she begs, to which he declares “the chocolate cake looks great!” Not a promising start for a romance.

In 1960 with Columbia Records, Hahn recorded her brother Bob’s song “Montreal.”Another release with Columbia was “Another Lonely Day”. As well on the private Dayton Hamvention label on May 7, 1960, she released a jazz tune titled “Dah-Di-Dah-Dit, Dah-Dah-Di-Dah”. The song was a tribute to a radio station with call letters CQ

Hahn returned to nightclub work in the early 1960s but was making only occasional club and TV appearances. This included on CBC TV as a guest on the Peggy Neville Show and CBC’s Up and Coming. These invitations faded by the end of the decade. Joyce Hahn left the music business, and later lived in Los Angeles. She retired to Nevada.

Joyce’s brother Robert “Bob” Hahn wrote a book titled None of the Roads Were Paved about the family’s musical odyssey. He moved to Montréal where he became known as Canada’s “Jingle King” – most people of a certain age will recall his “Mainly because of the meat” jingle for Dominion Stores. He soon moved into record production and music publishing (Laurentian Music and CanCon Music). In the early ‘60s, he helped spearhead what became the  Canadian Content regulations. He owned Astra Records and Rising Records, which recorded the Lisa Hartt Band and others. Bob Hahn also got Montréal band Mashmakhan signed to Columbia Records.

Hahn died at the age of 92 in Sparks, Nevada, in December 2021. Though her death is noted in The Canadian Encyclopedia website, a search online scrolling through lists on the first ten pages found no obituary. If anyone can fill in some of the details about Joyce Hahn’s life since she left the music business, I’ll add it to this post.