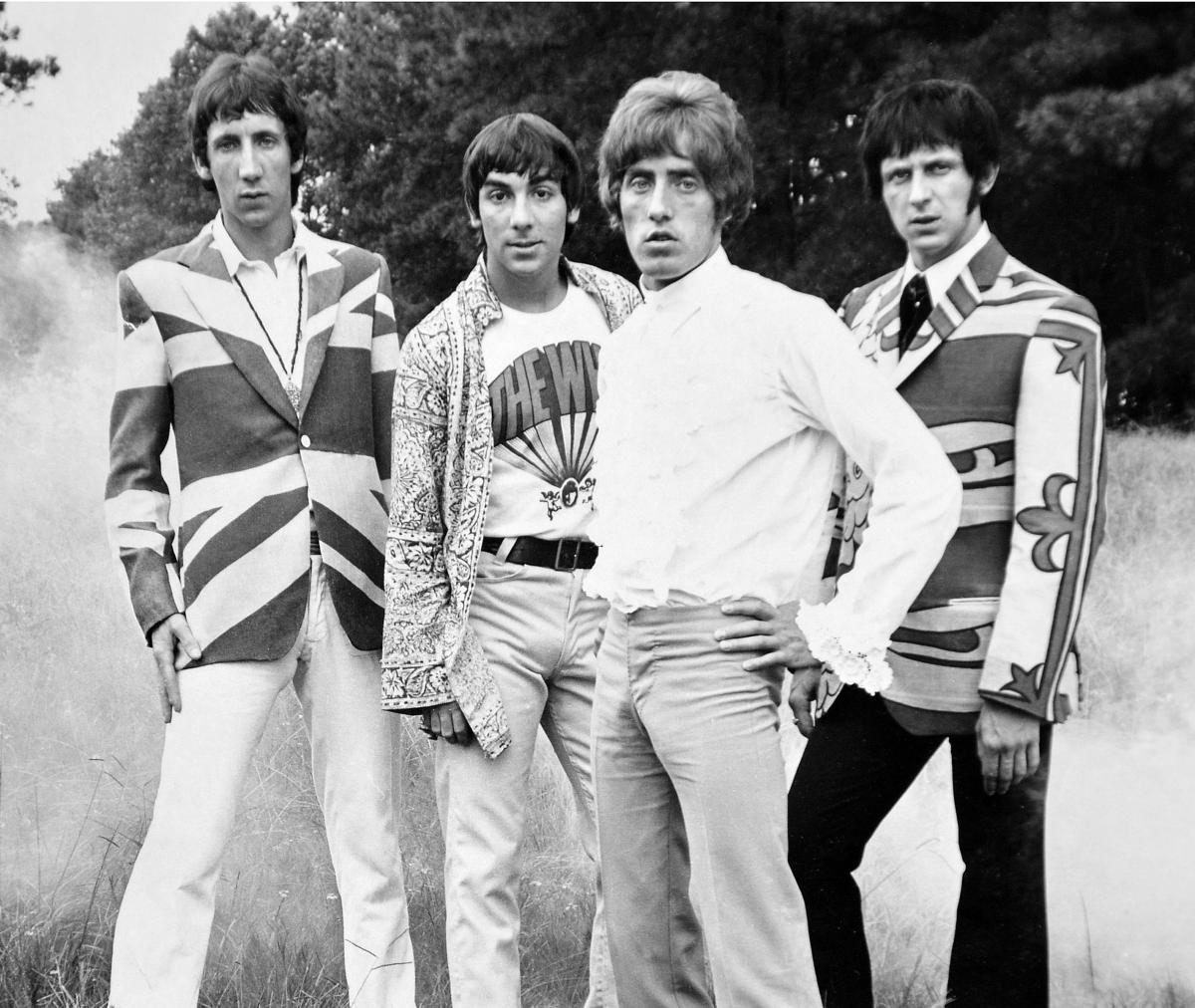 The Who are an English band who emerged in 1964 with singer Roger Daltry, guitarist Pete Townshend, bassist John Entwistle, and drummer Keith Moon. The band enjoyed popular singles, such as “I Can See For Miles”, “Pinball Wizard” and  “Won’t Get Fooled Again”. In Vancouver the band had eleven Top Ten hits, while in the UK they charted fourteen singles into the Top Ten. But in America, between 1965 and 1982, the Who only charted one single – “I Can See For Miles” –  into the Top Ten of the Billboard Hot 100. The band were innovators of new genres in rock n’ roll with their rock operas Tommy and Quadrophenia. The Who early on were known for outlandish antics on stage. At the Railway Hotel in Wealdstone, England, in June, 1964, Peter Townshend destroyed his guitar on stage and smashed it into other instruments. The Who stand alongside The Beatles and The Rolling Stones as among the most influential rock bands from Britain. They had their first Top Ten single in the UK and in Vancouver in 1965 titled “I Can’t Explain”, which peaked at #8 in the UK and #2 in Vancouver.

Roger Daltry was born in East Acton, a suburb of London, in 1944. He learned how to play guitar and became the lead singer and lead guitarist for a skiffle band called The Detours, in 1959. He worked as a sheet metal worker by day and musician by night. After their first hit single Daltry’s bandmates in The Who kicked him out of the band after he beat up Who drummer Keith Moon for providing drugs to Pete Townshend and John Entwistle. Daltry had to assess his strategy for dealing with conflict with others. Seven days later, Daltrey was allowed to return to the band, but he had to be put on probation. Daltry swore that he wouldn’t be physically violent anymore. He later reflected, “I thought if I lost the band I was dead. If I didn’t stick with The Who, I would be a sheet metal worker for the rest of my life.”

Peter Townsend was born in West London in 1945. Born into a musical family, Townshend learned to play guitar at the age of eleven. He and a schoolmate, John Entwistle, formed a traditional jazz group called the Confederates where Townshend played banjo and Entwistle played horn. John Entwistle joined Roger Daltry’s band, The Detours, in 1961. And soon after suggested Pete Townsend join the band. In 1964 there was another regional band named The Detours and so Daltry’s band came up with a new name, The Who.

John Entwistle was born in Cheswick, a suburb of London. From the age of seven be began to learn piano and then went on to learn the trumpet, French horn and guitar. He played with Pete Townsend in the Confederates and later joined Roger Daltry’s band, The Detours, in 1961.

Keith Moon was born in 1946 in Central Middlesex and grew up in the Greater London suburb of Wembley. He initially learned the bugle while in Sea Cadets at the age of twelve, but soon moved on to learn the drums. He was part of a band in the early 60s called The Escorts, but by the end of 1962 Moon had moved on to join the instrumental band, The Beachcombers. At age seventeen he auditioned for and got the position as drummer for The Who.

The Who were one of a number of classic rock ‘n roll bands from the UK who were part of the British Invasion. Others who were part of that wave include The Yardbirds, The Kinks, Cream, The Hollies, The Troggs, Manfred Mann and the Small Faces.

“I Can’t Explain” was the first single released by The Who. Their next single, in the winter of 1965 was called “My Generation.” It peaked at #2 in the UK, but only climbed to #74 in the USA, but made the Top 20 in Vancouver peaking at #18. Several more singles that did well in the UK failed to make a dent on the Vancouver charts until the release of “I’m A Boy”. The song had been released in the UK in July 1966 and climbed to #2 on the British charts. In Vancouver the song managed to peak at #4. Happy Jack was recorded in November 1966 and produced by Kit Lambert. This was during the period when The Who had appeared several times on the British pop music show Ready Steady Go. At the time The Who had five Top Ten hits in the UK, but no singles that had charted well in the USA. The best performance on the Billboard Hot 100 to date was My Generation with a chart peak of #74.

The lyrics to Happy Jack concern a man who lived in the sand on the Isle of Man. Like the lapping waves of the water, Jack remained happy no matter how much the kids on the beach tried to hurt Jack or dampen his spirits. On the liner notes for the album, Meaty, Beaty Big & Bouncy, Pete Townshend wrote these words about Happy Jack: “It was meant to be based on the Isle Of Man, which is an island where I spent a good part of my childhood, between England and Ireland. It’s got its own laws and everything. And my father, as a musician, used to play there a lot. And they have this peculiar beachcomber there, has an image sort of like Moondog, you know. And I spent a lot of time mocking him, and so did most of the kids, but he always seemed to be happy and he didn’t mind. I don’t even know what his name was. He used to try and come up and lead the donkeys that the kids rode on the beach. He used to try and come up and lead them, and then they’d chase him off. But he used to take everything kindly. Didn’t matter. Once he was sleeping on the beach and they actually physically buried him, and he would be suffocating, but he just laughed at them. It taught me something.”

June 16-18, 1967, the Monterey International Pop Festival was held in Monterey, California. The festival featured many popular rock n’ roll artists and debuted Janis Joplin, Jimmy Hendrix, Otis Redding and The Who to a large American audience. At the end of their set Pete Townsend smashed his guitar and Keith Moon kicked over his drum-set. Following their appearance at Monterey, The Who went on tour with Herman’s Hermits as the opening act. According to Dave Marsh in his book Before I Get Old: The Story of The Who, the band added to their notoriety for violence while on this tour. It was in a hotel in Flint, Michigan, that the band caused $24,000 worth of damage to their hotel room. In the midst of growing stardom, born of both musical success, live performance antics and unflattering news stories, The Who released “I Can See For Miles”.

The Who went on to chart another 14 singles into the Top 20 in Vancouver into the 1980’s. One of these was “Call Me Lightning”, a hit in the spring of 1968. They went on to record a rock opera, Tommy. From the album came “Pinball Wizard”, “I’m Free” and “See Me, Feel Me”. Other hit singles by The Who include “Magic Bus”, “Squeeze Box”, “Who Are You” and “Won’t Get Fooled Again”.

Drummer, Keith Moon, died in 1978 and was replaced by Kenny Jones through to 1988. The Who have released eleven studio albums, their last in 2006. They continue to perform in concert and appeared at the Rogers’ Arena in Vancouver on May 13, 2016. They currently are on tour between February 12 and May 23, 2020, with twelve dates in the UK and Ireland, and eleven concert dates in the United States.

2 responses to “Happy Jack by The Who”