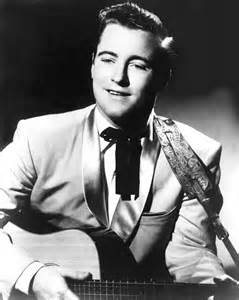 #1250: Hard Rock Mine by Dorsey Burnette

Dorsey Burnette was born in 1932 in Memphis, Tennessee. He played bass in his younger brother Johnny Burnette’s rockabilly Rock ‘n Roll Trio. Dorsey became a solo artist and had a few minor hits in the late 1950s and early 1960s. His biggest hit was in 1960 with “Tall Oak Tree” that peaked in the Top 30 in the USA and #15 in Vancouver. Dorsey Burnette is best known for writing over 350 songs. His most well known songs were recorded by teen idol, Ricky Nelson. When he was six his dad bought him a Gene Autry guitar, along with one for his younger brother, Johnny. Dorsey had a temper and was on a path to becoming what was then called a juvenile delinquent. He put his temper to better use competing as a Golden Gloves boxer. He met another boxer when he was 17 years old at the 1949 championship named Paul Burlison. They discovered a mutual interest in music. However, Burlison was  inducted into the US Army in 1951. Dorsey and his brother began appearing on Memphis radio stations and playing gigs for beer money, kicks and girls.

When Burlison returned from the Army the Burnette brothers formed a trio with him.The Rock and toll Trio first performed “Rockabilly Boogie” in 1953. The songs’  title was made up from the name of cousin a of the Burnette brothers named Rocky, together with the name Billy. From that songs first performance the term rockabilly was coined. Johnny Burnette is singing the lead on this with Dorsey Burnette on guitar.

In addition to his gigs, Dorsey worked at various jobs picking cotton, fisherman, carpet-layer, a deckhand on a riverboat and apprenticing to become an electrician. While Dorsey worked at Crown Electric there was a guy who worked odd jobs there called Elvis Presley who was a few years younger. Presley had been raised in the same housing project. But he gave up his work at Crown Electric, recorded some records and got a contract with Sun Records. The Rock and Roll Trio decided to take a shot at making music their profession. It helped that Dorsey Burnette and Paul Burlison were soon given the pink slip at Crown Electric.

In 1956 got a few breaks including several appearances on shows with ABC and a subsequent record deal with the Coral label.  But the Rock ‘n Roll Trio came to be billed as Johnny Burnette and the Rock ‘n Roll Trio. Dorsey didn’t like the way the groups agents marketing of the trio or his brother Johnny’s leap into the limelight. Dorsey quit the trio just before their planned appearance in the film Rock Rock Rock featuring rock ‘n roll DJ Alan Freed.

Dorsey moved to California after turning down an invitation to appear on the Louisiana Hayride. The brothers audaciously stepped up the street where Ozzie and Harriet Nelson lived in Beverley Hills and asked to speak to their son, teen idol Ricky Nelson. At that moment Ricky Nelson came up the driveway in his motorcycle. Nelson asked Dorsey and Johnny to perform in front of him on the spot. Of the ones Ricky Nelson recorded the most successful were written by Dorsey. These include “Waiting’ In School”, “It’s Late”,  “Believe What You Say” and “Gypsy Woman”. This songwriting success led to a record deal with ERA Records.

Dorsey wrote his first hit, “Tall Oak Tree” and his follow-up that cracked the Top 50 called “Hey Little One”.  Three more single released all failed to chart in the USA, as did “Hard Rock Mine”. The latter got got some airplay in San Antonio, Texas, and peaked at #20. The song sung from the viewpoint of a retired and blinded miner about his good colleague Rocky Joe who worked in the mine and died in a blast didn’t catch on. However, it was a hit in Vancouver having been chosen by CKWX as the DISC-overy of the Week and then seven more weeks on the chart to peak at #14.

Rocky Joe was a friend of mine
and we’d sweat and toil in a hard rock mine,
Joe liked to drill where the rock was hard,
and he never never let up ’til the round was fired.

Chorus:
He said, “the rock is hard and the air is bad.
But I’m a miner just like my dad.
When the steel is hard and I’m feeling fine,
I’m gonna drill my way down through that hard rock mine.

Then Joe loaded the hose with the dynamite,
but the fuse was wet he couldn’t make it light.
I heard the thunder roar and the boulders fall,
and through the smoke and dust, Lord, I could hear Joe call.

Now I’m old and I can’t see,
for the blast that took Joe’s life has blinded me.
But I can hear the steel against the wall,
and through the lonely night I can hear Joe call. From 1880 to 1910, mine accidents claimed thousands of fatalities in North America. During the early decades in the 20th Century yearly mining fatalities exceeded more than 1,000. By the 1950s the annual death tolls from all mining accidents in the United States and Canada was around 600. In living memory of folks on the British Columbia West Coast in 1961, when “Hard Rock Mine” was on the CKWX chart, was a mining disaster that took place at the time some 74 years earlier. It was the Nanaimo mine explosion on May 3, 1887, in Nanaimo, British Columbia. It killed 150 miners including 53 Chinese workers. Only seven miners survived and the mine burned for one full day. The explosion started deep underground in the Number One Coal Mine, after explosives were laid improperly. Although many miners died instantly, others were trapped by the explosion. These men wrote farewell messages in the dust of their shovels. Nearly 150 children lost their fathers and 46 women became widows. A plaque at the foot of Milton Street on Nanaimo commemorates the event.

In addition to the disaster in Nanaimo, on Vancouver Island, there were explosions in other mines across the country. These included one on June 19, 1914, when 189 miners died after an explosion at a mine in the town of Hillcrest, Alberta. In Springhill, Nova Scotia, 39 miners died from an explosion on November 1, 1956. Another explosion at the same mine on October 23, 1958, left 75 miners dead. South of the border two explosions at mines in Illinois left 111 dead in Centralia on March 25, 1947, and 119 dead in West Frankfort on December 21, 1951. Just from reading the news ordinary folks understood that working in a mine involved considerable risks of ones safety, healthy and mortality. All of these disasters, among many other smaller mining accidents all resulting in fatalities, might have suggested that “Hard Rock Mine” might catch on. The tale Dorsey Burnette tells features the tenacity and bravery of miners like his character Rocky Joe.

Dorsey Burnette wasn’t the only recording artist singing about work conditions in mines. In September 1961 Jimmy Dean had a number one song on the Billboard Hot 100 and the Billboard Country singles chart with “Big Bad John”. Deans’ song told the story of a miner nicknamed Big John because of his height, weight, and muscular physique: “He stood six foot six and weighed two forty-five.” Big John is said to have come from New Orleans where he killed a man over a Cajun Queen. One day, a support timber cracked at the mine where John worked. The situation seemed dire until John “grabbed a saggin’ timber, gave out with a groan, and like a giant oak tree just stood there alone.” Big John finally gives “a mighty shove,” and opens up a passage that enables the 20 other miners to escape the mine. At the moment the other miners were about to re-enter the mine with the tools necessary to save Big John, the mine collapsed and John died at the bottom of the mine. The mine itself was never reopened, but a marble stand was placed in front of it, with the words “At the bottom of this mine lies a big, big man, Big John.”

The story about “Big Bad John” was mythic and drew on Greek tales of Polydamas of Skotoussa, a winner of the 93rd Greek Olympics in 408 BC. Polydamas wrestled and killed a lion on Mount Olympus with his bare hands and stopped a chariot at a full gallop. One summer when Polydamas and his friends were relaxing in a cave the roof began to crumble down upon them. Believing his immense strength could prevent the cave-in, he held his hands up to the roof, trying to support it as the rocks crashed down around him. His friends fled the cave and reached safety, but Polydamas died there.

In the late 50s and early 60s there were a number of songs about work. One of the biggest songs from the 1950’s was Tennessee Ernie Fords’ “Sixteen Tons” from 1955. In 1961 Brook Benton was singing his “Boll Weevil Song” about the plight of cotton farmers when that pesky insect infests the cotton fields. In 1966 Lee Dorsey had a Top Ten hit about the exhaustion of “Working In A Coal Mine”. In 1960 Sam Cooke had a big hit about prisoners working on a “Chain Gang” along a highway. Meanwhile, that same year, the Fendermen sang about their “Mule Skinner Blues”.

Though his 1960 recording of “Hey Little One” experienced a resurgence again in Vancouver in 1963, Dorsey Burnettes’ star was fading in the face of the Surfin’ Sound, the Bossa Nova, the British Invasion, Motown and other trends in pop music. Over the course of his career Dorsey Burnette wrote over 350 songs. Various artists have recorded some of these including Roger Miller, Juice Newton, Brenda Lee, Stevie Wonder, the Beatles, Cher, Rod Stewart, Jerry Lee Lewis, the Grateful Dead  and Donny Hathaway. In 1964 his brother Johnny died after the fishing boat he was in was hit by a cabin cruiser. The impact threw him off his fishing boat and he drowned.

Given to excess in much of his life, in grief Dorsey turned to alcohol, drugs, overuse of  prescriptions and then to religion. After eight years he gave his attention to country music. Starting in 1972 with “In The Spring The Roses Always Turn Red”, Dorsey would chart 14 more singles on the Billboard Country singles survey. From time to time he got into fist fights at small venues where he played. At the age of 46 he died in his California home of a heart attack in 1979.