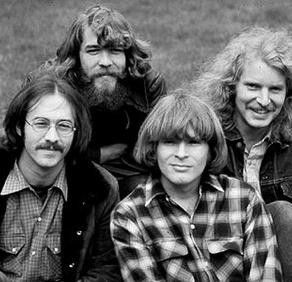 #104: Have You Ever Seen The Rain/Hey Tonight by Creedence Clearwater Revival

Doug Clifford was born in Palo Alto, California, and learned to play drums in his teens. Thomas Richard Fogerty was born in 1941 in Berkeley, California. In his teens he had a band called Spider Web that included future Seeds guitarist Jimmy Levine. Guitarist, Stu Cook, was also raised in the Bay Area. Their self-titled debut album was released in the summer of 1968. It included a cover of the Dale Hawkins classic from 1957, “Susie Q”.

It may be that CCR were thumbing through the “H” section of rock n’ roll singers when they decided to cover another song by a singer with the surname of Hawkins. Another track of their debut album was “I Put A Spell On You” by Screaming Jay Hawkins.

The next single CCR released was in July 1969 was the title track from their third studio album: “Green River”. The B-side was “Commotion”. CCR released one more single in 1969, “Down On The Corner”, with the B-side “Fortunate Son”.

CCR charted one single after another into the Top Ten. Many of their singles were double-sided hits. Of the 19 songs that charted on the Vancouver pop charts between September 1968 and May 1972, CCR charted 18 into the Top Ten and 17 of these into the top three positions. Nine of the songs made it to #1. In early 1970 CCR had a #2 hit with “Travelin’ Band”/”Who’ll Stop The Rain”. This was followed in the spring of 1970 with “Up Around The Bend”/”Run Through The Jungle”. The latter included comments about the proliferation of guns in America, “200 million guns are loading. Satan cries ‘take aim.'” The double-sided hit climbed to #1. As the single was climbing the pop charts in Vancouver, CCR appeared in concert at the Pacific Coliseum on May 1, 1970. And in September 1970 CCR had another double-sided #1 hit with “Looking Out My Back Door”/”Long As I Can See The Light”.

The band had a final #1 hit in Vancouver in March 1971 with “Have You Ever Seen The Rain”/”Hey Tonight”. 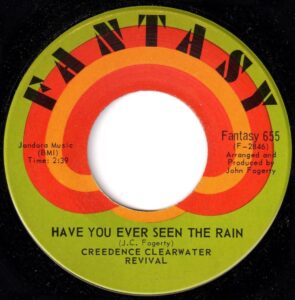 “Have You Ever Seen The Rain” was written by John Fogerty. In the song, Fogerty writes about rain “coming down on a sunny day.” Sun showers becomes a metaphor for some listeners. In his review for Allmusic website, Mark Deming suggests that the song is about the idealism of the 1960s and about how it faded in the wake of events such as the Altamont Free Concert and the Kent State shootings, and that Fogerty is saying that the same issues of the 1960s still existed in the 1970s but that people were no longer fighting for them. Some listeners wrote on Songfacts that they thought the “rain” was a metaphor for bombs falling on sunny days in Vietnam. Later, Fogerty in an interview stated the inspiration for the song came initially from the zenith of Creedence Clearwater Revival’s success. The band had what looked like a great horizon with more success ahead of it. Yet, there were interpersonal divisions that were making it rain on their success. The band began to break up in the winter of 1971-72.

In about half of these radio markets, “Hey Tonight” was a double-sided hit single, climbing the chart in the same position with “Have You Ever Seen The Rain”. 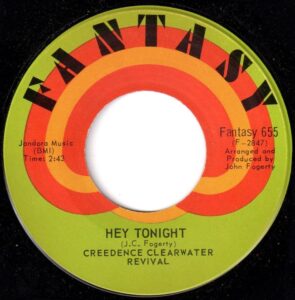 “Hey Tonight” was also written by John Fogerty. It’s a song about people partying “Don’t you know I’m buying” (another round). As well, “Jody’s gonna get religion” is a reference to having sex and what someone might moan during the encounter “(Oh God, Oh God…).” The chart run for “Have You Ever Seen The Rain”/”Hey Tonight” didn’t make it onto the list for the Billboard Top 100 Singles of 1971.

A final appearance in the Top Ten for Creedence Clearwater Revival was in August 1971 with “Sweet Hitch Hiker”.

Dissension between bandmates led to the demise of Creedence Clearwater Revival. Tom was not getting along with his brother, John. Tom left the band in 1971. Stu and Doug quit after January 1972, after the band recorded the album, Mardi Gras, that critics panned. Their hit from the summer of 1971, “Sweet Hitch Hiker”, was on the album. A minor Top 30 hit in late spring 1972, “Someday Never Comes”, was also a track on the album.