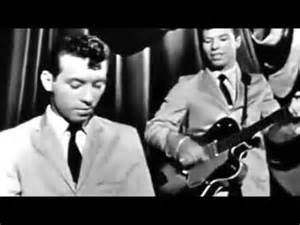 The Farina brothers, Santo & Johnny, were born in Brooklyn, New York. Santo, October 24, 1937 and Johnny, April 30, 1941. As a boy Santo Farina listened frequently to the Hometown Frolics, a country radio show. Through that association he came to love the sound of the steel guitar by the time he was teen. Santo convinced a neighborhood music store to modify and acoustic guitar to allow him to play it like a steel. Santo was mesmerized with the sounds he could produce on his new guitar and practiced day and night. Within two years, he was performing for amateur shows on a new Gibson six-string steel guitar. Soon after, he acquired a steel guitar teacher who had learned the art in Hawaii.

In 1952, at the age of fourteen, Santo formed an instrumental trio with a guitarists and drummer. By this time he was composing songs as well as the hits of the day. He also included a few Hawaiian standards when the group played at local dances and parties. With money he made from performing he bought another steel guitar. This one had three necks, each with eight strings. He experimented with the additional two strings until he came up with tunings that appealed to him. It was at this time Santo began teaching his younger brother Johnny, to play accompaniment on a standard electric guitar. The Farina Brothers started to establish a following from Brooklyn to Long Island.

As their popularity grew locally they recorded a couple of demo tapes and ended up signing with Canadian American Records. Their debut single in 1959 called “Sleep Walk” which was written by the brothers. It was a #1 hit for two weeks on the Billboard Hot 100 in the USA in September, and peaked at #4 on CFUN in Vancouver. With their unmistakable steel guitar sound, they were featured on a circuit of TV shows including American Bandstand and The Perry Como Show. Their fame spread to other countries and they were booked on tours in Australia, Mexico and Europe. They were than signed to an Italian record label and had a string of hits in Europe.

In Vancouver they had six more singles on the local charts. The most successful of these was in the spring of 1961 called “Hop Scotch”, a western-themed tune. Hopscotch is a children’s game. It can be played with with one or more players. Hopscotch is a played outdoors on a playground. Players in the game toss a small object into numbered triangles or a pattern of rectangles marked on the ground. Some hopscotch courts are scratched out in the dirt. Others are drawn in chalk on pavement. Designs vary, but the court is usually composed of a series of linear squares interspersed with blocks of two lateral squares. Next, the players hop through the spaces to fetch the object. Typically, the court ends with a “safe” or “home” base in which the player may turn before completing the reverse trip.

In a 2002 exhibit on childhood games, the Musée de la Civilisation in Quebec City, Quebec, had this to say about hopscotch: “No one knows where hopscotch began. Chinese texts make mention of it as early as 2357 B.C. Whether inscribed on sepulchres in Egypt, Greece or elsewhere, the game has always used the same rectangular or spiral plan. The player hops along, pushing a marker that represents the soul. If he wobbles, it is because his soul is weak and he must work at purifying himself to get to heaven. After avoiding hell, and earning different merits, the player reaches heaven, picks up the marker (his soul) and places it under his arm or on his head, symbolizing the re-merging of soul and body. The aim of the game is to avoid stepping on the lines dividing the boxes, symbolic of keeping one’s life free of uncertainty. Hopscotch is entirely predictable. It is a game of initiation, which helps the player learn about himself through the development of certain skills. Once scratched in the dirt, hopscotch was later drawn on flat surfaces. It is the predecessor of board games such as Go, Chess, Checkers, etc., which are known as seated hopscotch games.”

Starting in 1962 with Dr. No, Santo & Johnny went on to cover the soundtracks for the James Bond films. In 1965 the duo’s instrumental version of the Beatles song, “And I Love Her”, hit the #1 spot in Mexico and held it for 21 weeks. In 1973 they recorded “The Godfather” movie theme, “Il Padrino”. It held the #1 spot for them in Italy for 26 weeks which broke all records in Italy. They received a Gold Record for it in Italy and were inducted into the Hall of Fame in Italy as well. In 1979, Santo Farina co-wrote a song with Lisa Ratner called “Kiss Me In The Rain”, which Barbra Streisand covered on her album Wet.

In total, Johnny Farina and “Santo & Johnny” have recorded and released 35 Albums and over 50 Singles worldwide in their career, spanning over Fifty years. Currently, at age 79, Santo Farina is semi-retired, while 75 year-old Johnny continues to tour.