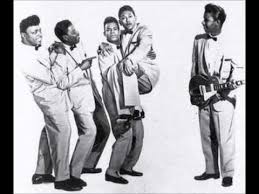 #991: Little Egypt by The Coasters

The Coasters are rhythm and blues group that had six Top Ten hits on the Billboard pop charts in the late 1950’s. Their most memorable songs were written by the songwriting and producing team of Leiber and Stoller. The Coasters formed in October 1955 from an earlier Los Angeles based R&B group named The Robins. They were the third “bird” group in the R&B scene, along with The Ravens and The Orioles. The Robins had a #9 R&B hit in 1954 called “Riot in Cell Block No. 9”. Then in 1955, they had an even bigger regional hit in California called “Smokey Joe’s Cafe”. The song, written by Leiber and Stoller, was inspired by a real cafe, a beanery called “Smokey Joe’s” which was right next to an oil well at the corner of Beverly Boulevard and La Cienega. The record became popular enough that Atlantic Records offered The Robins an independent contract to produce the group for the Atlantic label. Only two of The Robins, Carl Gardner and Bobby Nunn, were willing to make the move to Atlantic and become part of what was renamed The Coasters. The original Coasters’ members were Carl Gardner, Billy Guy, Bobby Nunn, Leon Hughes, and guitarist Adolph Jacobs. (The Robbins, singing at The Trocadero in Los Angeles, 1955, with Bobby Nunn and Carl Gardner far left) Bobby Nunn was born in Birmingham, Alabama in 1925 and raised in Detroit. Carl Gardner was born in 1928 in Tyler, Texas. Leon Hughes was born in Dallas, Texas, in 1932. Born Frank Phillips Jr in 1936 in Itasca, Texas, he was billed as Billy Guy and joined the Coasters in 1955.

Once they were with Atlantic Records, The Coasters had a string of hits including a double-sided hit, “Young Blood” and “Searchin'” in 1957. “Searchin'” was the B-side and was initially judged to be too silly to become a hit. However, as DJ’s began to play the B-side it overtook “Young Blood” which itself was already a Top Ten hit. “Searchin'” went to #2 in Vancouver. The Coasters had picked up from The Robins comedic “Smokey Joe’s Cafe” and offered up another amusing Leiber and Stoller tune that caught on across North America. It was the #21 song for the year 1957 on the Billboard charts. In the summer of 1957 the Coasters appeared in concert in Vancouver at the Kerrisdale Arena on August 23rd.

The hit tunes kept coming with The Coasters only #1 hit in the USA,  with 1958’s “Yakety-Yak” The song featured a memorable saxophone solo by King Curtis, while the lyrics detailed a scolding father telling his son to do his chores. 1959 was The Coasters best year with three Top Ten hits. Their first smash hit that year was a song called “Charlie Brown” about a prankster and troublemaker at school. The tune climbed to #1 in Vancouver. The Coasters followed up with a parody of Western TV shows titled “Along Came Jones”. The year ended well for the group with “Poison Ivy” peaking in the Top Ten.

“Little Egypt was the last Top Thirty hit song for The Coasters. It reached #23 on the Billboard Hot 100 in 1961. In Vancouver it peaked at #4. While U.S. record buyers were not taken with the lyrics, Vancouverites seemed to like the story of the exotic dancer wearing nothing but a button and a bow, who had a ruby in her tummy and a diamond big as Texas on her toe. The lyrics told of when “she did her special number on her zebra skin she nearly stopped the show.” Titillating as the first few verses were, listeners learn that Little Egypt is now a mom with seven toddlers who crawl around the floor. “Little Egypt” is a song about an exotic dancer. The Hoochie-Coochie is a catch-all term to describe any of a number of sexually provocative belly dances. Belly dance is primarily a torso-driven dance, with an emphasis on articulations of the hips.

In 1893 there was a World’s Fair: Columbian Exposition held in Chicago to celebrate the 400th anniversary of Christopher Columbus’s arrival in the New World in 1492. The centerpiece of the Fair, the large water pool, represented the long voyage Columbus took to the New World. The “Street in Cairo” included the popular dancer known as Little Egypt who was featured at the Egyptian Theatre’s show “The Algerian Dancers of Morocco.” She introduced America to the suggestive version of the belly dance known as the “hooootchy,” to a tune said to have been improvised by world’s fair promoter, Sol Bloom. The tune is now more commonly associated with snake charmers, and Bloom had composed the tune when his dancers had no music to dance to.

Little Egypt’s birth name was Fahreda Mazar Spyropoulos. She was born in 1871 and had been performing under the stage name Fatima when she got her start at the Bird Cage Theatre in Tombstone, Arizona. In the reopened saloon’s lobby still hangs a larger-than-life sized painting she donated entitled Fatima. It bears six patched bullet holes. By 1893 Little Egypt was 22 years old. (Another dancer who took turns spelling Little Egypt off on stage at the World’s Fair: Columbian Exposition “Street in Cairo” show was Fatima Djamile, just to confuse things). The show at the Egyptian Theatre at the World’s Fair’s mid-way was titled “The Algerian Dancers of Morocco.” Fahreda Mazar Spyropoulos was actually neither Egyptian nor Algerian, but Syrian. She popularized this form of dancing, which came to be referred to as the Hoochie-Coochie, or sometimes called the Shimmy and Shake. At that time the word bellydance hadn’t become part of the American vocabulary, as Spyropoulos was the first in America  to exhibit the “danse du ventre” or “dance of the belly.” It was first seen by western Europeans by the French during Napoleon’s incursions into Egypt at the end of the 18th century. When Mark Twain had attended a show with Little Egypt he nearly had a heart attack from watching her performance. Subsequently, Twain featured Little Egypt in his first silent film movie. In 1896, Spyropoulos was arrested by New York City police. A raid took place at the famous Sherry’s restaurant where she was caught dancing the hooch-coochee, this time, in the nude, at a stag party given by the grandson of P. T. Barnum.

Little Egypt is the title of a 1951 Technicolor comedy drama film directed by Frederick de Cordova starring Mark Stevens and Rhonda Fleming. It is a highly fictionalised biography of the dancer Little Egypt in the 1890’s. Spyropoulos danced as Little Egypt as late as 1933 for the Century of Progress centennial fair in Chicago at the age of 62.

“Little Egypt” was The Coasters last hit record. In their song they update the timeline of the real Little Egypt, from her heyday in the 1890’s, to a more contemporary 1949. Amusing as their comedic story lines were, musical trends were shifting to Motown and the early 60’s dance craze. The Coasters tunes weren’t seen as sophisticated enough for the new crop of teenagers chasing new musical fads.

The Coasters’ hits made up the majority of tunes in the score for the 1994 musical revue Smokey Joe’s Cafe, a retrospective of Leiber & Stoller songs. The musical won one Grammy Award and seven Tony Award nominations following its 1995 Broadway debut.

In 2007, Carl Gardner’s autobiography Carl Gardner: Yakety Yak I Fought Back—My Life with The Coasters, was published. In 2005 Carl Gardner retired. His son, Carl Jr., replaced him as lead vocalist for The Coasters. As of 2008, The Coasters line-up was Carl Gardner Jr., Ronnie Bright, Alvin Morse, J.W. Lance and guitarist Thomas Palmer. The group appeared in concert late September, 2017, in Myrtle Beach, South Carolina, along with The Drifters and The Platters.