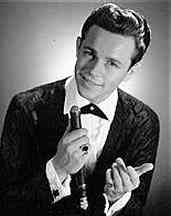 Bobby Curtola was born in Port Arthur, Ontario, in 1943. (The town would become amalgamated into the city of Thunder Bay in 1970). His cousin Susan Andrusco remembers “”Bobby would always be singing at our family gatherings. The family loved him. And he loved being the centre of attention. He would sing Oh My Papa, and my grandpa would cry.” Oh My Papa was a number-one hit for Eddie Fisher in January 1954, when Bobby Curtola was still ten-years-old. In the fall of 1959, sixteen-year-old high school student Bobby Curtola went from pumping gas at his father’s garage in Thunder Bay, Ontario, to the life of a teen idol. Within a year he went from playing in his basement band, Bobby and the Bobcats, to recording his first hit single in 1960, “Hand In Hand With You”, which charted in June ’60 in Ontario, but not in Vancouver.

After performing on the Bob Hope Show in 1960, the charismatic teenager, with his handsome boy-next-door looks was quickly finding himself within a whirlwind called “Curtolamania.”

Bobby set out on his first Western Canadian Tour in the fall of 1960. From there Curtola went on to become a trailblazer. He toured the first coast to coast tour circuit in Canada. In 1961 he went to Nashville to record with Bill Porter for RCA Studios. That relationship continued for decades. “Don’t You Sweetheart Me” was his first Top Ten hit in Canada. The song climbed to #1 in Winnipeg, #4 in Vancouver and #5 in Toronto. In September 1961 Curtola was back on the CFUN chart in Vancouver with “I’ll Never Be Alone Again”. He had another hit on his hands four months later with “Hitchhiker“.

Between 1960 and 1968 Curtola had continual single and album releases on the Tartan label in Canada. The managers and main songwriters were brothers Dyer and Basil Hurdon. The Del-Fi label released some of those singles in the US. His biggest hit, “Fortune Teller”, was released in 1962 and went Gold in Canada. The now Rock n’ Roll Hall of Fame DJ, Red Robinson, was key in the success of “Fortune Teller.” Seeing its potential internationally, Robinson sent it to Disc Jockey’s in Seattle at KJR and Hawaii’s KPOI in Honolulu. A major US record deal was signed and “Fortune Teller” went on to sell two and a half million copies. Bobby Curtola was invited in 1962 to tour with Dick Clark and his Cavalcade of Stars. Curtola also enjoyed other Top 20 hit in ’62 in Vancouver with “You Must Belong To Me” and “I Cry And Cry“.

In 1963, Bobby Curtola had five songs climb into the Top Ten on CFUN in Vancouver. These were “Destination Love,” “Gypsy Heart“, “Indian Giver,” “Three Rows Over” and “Move Over“.

Between the summer of 1961 and December 1963 the boy from Thunder Bay had charted twelve songs into the Top 20 in Vancouver, nine of these into the Top Ten. But in February 1964 everything was about Beatlemania. The moment The Beatles appeared three times that month on the Ed Sullivan Show, Curtola struggled to get Canadian record buyers attention. (He never got much traction with record buyers south of the border).  In Vancouver “Little Girl Blue” was his most successful effort in the face of the British Invasion and Beatlemania. And of eight singles between 1964 and the summer of 1965, only two climbed into the Top 20. On February 22, 1964, “Little Girl Blue” was stalled in its second week at #15 on the C-FUNTASTIC FIFTY. The record survey had taken an international turn. The Beatles had three singles in the Top Ten: “I Want To Hold Your Hand” at #1 for the fifth of six weeks in a row, since it’s appearance on the January 18th record survey when it debuted at #6. At #2 was “She Loves You” which had jumped from #14 to #2 on December 14, 1963. Since then “She Loves You” had spent four weeks at #1 and was in its eleventh of twelve weeks in the Top Ten. At #6 was the song that was #1 on January 18, “Please Mr. Postman”, a buffer between the other Beatles #1 hits. ‘Postman was in its seventh week in the Top Ten at #6. And on the February 29th record survey “All My Loving” jumped from #40 to #2, a factor that sent “Little Girl Blue” on a downward slide on the CFUN charts.

But it wasn’t only The Beatles that were causing Bobby Curtola to stall on the pop charts in February 1964. The British Invasion was in full swing on the CFUN charts. The Dave Clark Five had “Glad All Over” at #7 on their way to #3 in a few weeks. Perennial Vancouver favorite, Cliff Richard, who had never been embraced by American record buyers, had another of his many Top Ten hits in Vancouver climbing the charts, “Don’t Talk To Him”, at #4 up from #5. There were numbers of other British recording artists climbing the charts that February: The Swingin’ Blue Jeans with “Hippy Hippy Shake”, Dusty Springfield was singing “I Only Want To Be With You”, The Searchers were lamenting about “Needles and Pins” and The Shadows had an instrumental called “Geronimo”.

As for American recording artists there was the Surfin’ Sound. On the charts that February The Beach Boys leapfrogged over Bobby Curtola with “Fun, Fun, Fun” climbing from #30 to #11 bound for the Top Ten. The Rivieras were singing about that warm “California Sun”, while The Trashmen were telling everybody about a “Surfin’ Bird”.

“Little Girl Blue” is about a fan of a singer who stays after a performance to get him to write something on her arm. It was written by the songwriting team of Basil and Dyer Hurdon. Basil and Dyer Hurdon discovered Bobby at a time when he was going to school, working at his father’s gas station and playing high school dances with his group Bobby and the Bobcats. Basil’s son actually went to the same high school as Bobby and told his dad about him. The Hurdons managed Bobby, wrote all his songs, with the exception of the 1965 remake of Floyd Robinson’s “Makin’ Love”, and owned the Tartan label for which he recorded. “The Hurdons were thorough in their marketing of Bobby as the sweet, sincere, ideal ‘60s beau. Bobby’s popularity and the fan craze that surrounded him came about due to strategizing on the part of his management team. It was Basil and Dyer Hurdon who got the first chapter of the Bobby Curtola fan club off the ground.”

The song peaked at #15 on Vancouver’s CFUN, #12 in Kingston (ON), and Edmonton (AB), #11 in Hamilton (ON), #10 in Calgary (AB), and Saint John (NB), and #7 on CHUM in Toronto. In June of 1964, Bobby Curtola got to sing what would become an ear-worm for radio listeners across all radio and TV stations in the mid-sixties. He became the first pop singer to record a jingle that sounded like a Top 40 Hit Single. The jingle was “Things Go Better with Coke.” He signed an exclusive contract with Coca-Cola to be their #1 Spokesman. Bobby, also co-wrote “The Real Thing” which was used for the commercial “Coke’s The Real Thing.”