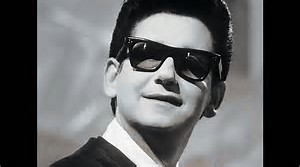 With the advent of Rock and Roll, the Wink Westerners renamed themselves The Teen Kings.  In addition to the TV show on KMID, TV station KOSA in Odessa, Texas, gave them a half hour slot on Saturday afternoons. The CBS affiliate also had Johnny Cash and Elvis Presley guest star on Roy Orbison’s KOSA TV show. Johnny Cash got Orbison in touch with Sam Phillips of Sun Records in Memphis. Orbison called Phillips who hung up the phone saying, “Johnny Cash doesn’t run my record company.”

Orbison had been approached by owners of Je-Wel Records who wanted The Teen Kings to make a record. The session took place in early March, 1956. This time, Roy and The Teen Kings, recorded The Clover’s “Trying To Get To You” and “Ooby Dooby”. The single was released March 19, 1956. That same day, Orbison took a copy to Cecil “Poppa” Hollifield in Odessa. He was a well-know record dealer in West Texas. “Poppa” Hollifield liked the record and played it on the phone to one of his connections in Memphis. The guy on the other side of the line asked him to send him a copy. His name was Sam Phillips, owner of Sun Records. A few days later “Poppa” telephoned Roy to say that Phillips wanted the Teen Kings in Memphis in three days to record for Sun Records. Roy Orbison and the Teen Kings arrived in Memphis on Monday, March 26, 1956. The next day they re-recorded “Ooby Dooby”. Bob Neal, owner of Starts Inc., signed the group to a booking and management contract. They kicked off with an experimental tour of Southern drive-in movies theaters, performing on the projection house roofs between film showings. Most of the time touring with Carl Perkins, Johnny Cash, Warren Smith, Sonny Burgess, Faron Young, Johnny Horton and then Jerry Lee Lewis and other Country and Rockabilly stars. “Ooby Dooby” peaked at #59 on the Billboard Hot 100 and #2 in Vancouver. However, follow-up singles failed to chart. The Teen Kings split up in December 1956 and Orbison stayed at Sun until 1958.

The B-side to “Running Scared” was “Love Hurts”. The song was written and composed by Felice and Boudleaux Bryant. They had a string of hits including “Wake Up Little Susie”, “Bye Bye Love”, “Bird Dog” and “All I Have To Do Is Dream” among others, for the Everly Brothers. They wrote “Raining In My Heart” for Buddy Holly, and “Last Date” for Floyd Cramer. The song was introduced in December 1960 as an album track on A Date with The Everly Brothers, but was never released as a single (A-side or B-side) by the Everlys’. The first hit version of the song was by Roy Orbison who climbed the Australian pop charts to #5. Although “Love Hurts” was the B-side to Running Scared, it charted separately in Vancouver peaking at #8. “Love Hurts” began to chart in the final week of the chart run of “Running Scared”, on May 20, 1961, and peaking on June 17, 1961. In marriage vows dating back to the Church of England’s 1549 Book of Common Prayer, couples have taken marriage vows that include the wording “to have and to hold from this day forward, for better for worse, for richer for poorer, in sickness and in health, to love and to cherish, till death us do part…” In the Roman Catholic rite in England the wording at the time was “I promise to be true to you in good times and in bad, in sickness and in health. I will love you and honour you all the days of my life.” These traditional marriage vows are a reminder that even in a committed marriage it is anticipated that there will be “better” times, “worse” times, “good” times, “bad” times, times of “sickness,” times of “heath,” the potential for being “richer” and of being “poorer.” On a wedding day a couple, and all who are there to celebrate with them, are focused on the love that has brought them to make the vows to one another.

However, “Love Hurts” warns that being in a relationship will test anyone. Being in a relationship isn’t only about “happiness, blissfullness, togetherness.” The song advises that love also scars, wounds and mars. And “love is like a stove, it burns you when its hot.” So anyone who wants to make love last had better be strong enough to confront the inevitable painful episodes that love can bring, as well as enjoy the good and better times. Nonetheless, the song lyrics seem to be written from the perspective of someone who has tried and failed to find any lasting love that is trustworthy and true. In the song, Felice and Boudleaux Bryant wrote “love is just a lie, made to make you blue.”

In his book, Why Marriages Succeed or Fail, John Gottman writes that research shows “happy couples had high standards for each other even as newlyweds. The most successful couples are those who, even as newlyweds, refused to accept hurtful behavior from each other. The lower the level of tolerance for bad behavior in the beginning of a relationship, the happier the couple is down the road.” So, it would seem love is not a lie, unless you fool yourself into thinking that hurtful behavior is a legitimate way of expressing love to someone else. (Another aspect is that some people, like the character Edith Bunker in the 1970’s sitcom, All In The Family, had such a sunny disposition that she took many of her husband Archie Bunker’s comments in the most charitable way. In some relationships what would typically be understood as put-downs aren’t interpreted as such, and so the couple carries on focusing on other things like paying the bills, making a living and getting food on the table).

Aside from reaching #8 in Vancouver, Roy Orbison charted “Love Hurts” to #1 in Worcester, Massachusetts, #3 in nearby Springfield, Massachusetts and #4 in Providence, Rhode Island. But outside of these radio markets the song was not a hit and it failed to crack the Billboard Hot 100. “Love Hurts” is also well known as a 1975 international hit by the Scottish rock band Nazareth.

The hits kept on coming for Roy Orbison with “Crying”, “Dream Baby” “In Dreams” and many other Top 40 singles. Roy Orbison was one of the few hit-makers to hold his ground, increasing his popularity despite the British Invasion. “It’s Over” went #1 in the UK and Ireland in the spring of 1964. His next single that year, “Oh Pretty Woman,” was his biggest all-time hit. Orbison toured Australia with the Beach Boys in 1964 and internationally with the Rolling Stones ’65. In 1966, his wife Claudette was killed in a motorcycle accident. In 1968, tragedy struck again when two of his three children died in a fire that burned down his house in Hendersonville, Tennessee.

In the 1980s Roy Orbison enjoyed a resurgence of interest. A duet of “Crying” with k.d. Lang climbed to #2 nationally on the RPM Canadian singles chart, though only to #35 on CKLG in February 1988. Orbison won a Grammy Award for the duet. Next Orbison sang with George Harrison, Jeff Lynne, Tom Petty and Bob Dylan, in a group called the Traveling Wilburys. Their single, “Handle With Care”, climbed to #9 in Vancouver and #45 on the Billboard Hot 100. Roy Orbison died dead at 52 from a heart attack on December 6, 1988. In April, 1989, his posthumous single, “You Got It”, climbed to #6 on CKLG in Vancouver. On November 3, 2017, “Love Hurts” was included in the first album of the Royal Philharmonic Orchestra with selected tracks from the Roy Orbison songbook. The album was titled A Love So Beautiful: Roy Orbison & The Royal Philharmonic Orchestra.